Floods kill three in eastern Germany | Germany| News and in-depth reporting from Berlin and beyond | DW | 07.08.2010

Severe storms and flooding have left three people dead in Saxony in eastern Germany. Authorities have forecast more rain in the region close to the border with Poland and the Czech Republic. 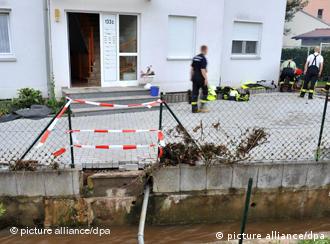 Overflowing streams have flooded homes throughout the town

Three people have died in the eastern German state of Saxony in floods caused by heavy rainfall, police said Saturday.

The victims, a 72-year-old woman, her 74-year-old husband and a 63-year-old man, were found in the cellar of their flooded apartment building in the town of Neukirchen, near the Saxon town of Chemnitz.

Police investigators believe the residents were taken by surprise as they tried to rescue belongings from the rapidly rising water.

The town has been inundated by several streams, swamping basements and causing the closure of a number of roads and part of a highway in the area. Around 11,000 households were without power for several hours.

More rain has been forecast for the state, and flood warnings have been posted for the Elbe River and its tributaries.

The Neisse River near Goerlitz, on the German-Polish border, rose nearly 4 meters within three hours late on Saturday, and evacuations from homes nearby are continuing, officials said. The river stood at a level of 6.88 meters as of midnight, well above the normal height of 1.7 meters. 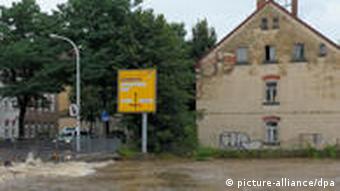 Water levels on the Neisse River have prompted evacuations

Earlier, the state of Bavaria also experienced heavy flooding as rivers overflowed there. The Allgau region was worst affected, with more than 100 liters of rain per square meter falling over a 24-hour period.

The heavy rains and subsequent flooding also took their toll in neighboring countries. At least four people died in the northern Czech Republic, close to the border with Germany.

Military personnel were called in to help with evacuation from some of the worst-affected areas. Helicopters were used to rescue some 1,000 people from the villages of Chrastava and Frydlant.

In the Polish town of Bogatynia there was one casualty after a river overflowed its banks, submerging much of the town as well as the main bridge into it. Several smaller bridges collapsed with a number of reports that buildings had collapsed.

"One person died either of drowning or under the debris of a house," the Polish news agency PAP quoted town hall spokeswoman Dagmara Turek-Samol as saying.

Many residents were forced to wait on rooftops to be rescued, and local authorities asked the military for help.

German Chancellor Merkel visited the flood-affected eastern state of Brandenburg near the Polish border on Saturday. She praised the infrastructural improvements since a disastrous flood in 1997. (29.05.2010)