Floodwaters are receding and the clean-up has begun, but damage estimates in Germany are in the hundreds of millions. Repairing infrastructure and homes will likely take months. 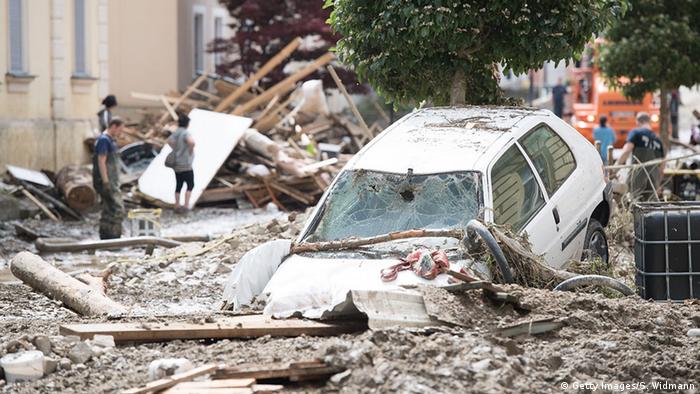 A 72-year-old man who was rescued from a raging stream in Bavaria later died of a heart attack at a hospital on Friday. But an elderly couple, aged 81 and 77, who were reported missing on Thursday, were found unharmed.

Several people attending an outdoor music festival in Mendig, about 375 miles (600 km) southwest of Berlin, were injured during a thunderstorm Friday night, but it's unclear if they were struck by lightning. The number of injured is also unclear.

Bavaria: Clearing up after the floods

Although much of Germany was soaked this past week, the southern states of Bavaria and Baden-Württemberg were hit the hardest. In addition to those killed, there was widespread flooding. Damage is estimated to be in the hundreds of millions of euros and will take months to repair.

Firefighters used powerful hoses to wash away the mud, while residents used spades and excavators to clean-up debris. Divers went into flooded basements searching for survivors or victims.

"The most important thing today is to ensure the area-wide supply of drinking water and to restore the road network," said a spokeswoman for the district of Rottal-Inn, near the Austrian border.

But even as the clean-up begins, heavy thunderstorms and hail remain a threat for southern and western parts of the country.

In Paris, the river Seine rose 20 feet (6 meters) above its normal height. The swollen river prompted the Louvre and Orsay museums to shutter their doors and move priceless art works to higher ground.

Days of cloudbursts across western Europe have caused ten deaths in Germany, two in France and Romania and one in Belgium. The River Seine in Paris is six meters higher than normal. (03.06.2016)

Forecasters have warned of more torrential downpours, which are likely to worsen flood hit areas of western Europe. At least seven people have been killed and thousands have been forced from their homes. (02.06.2016)