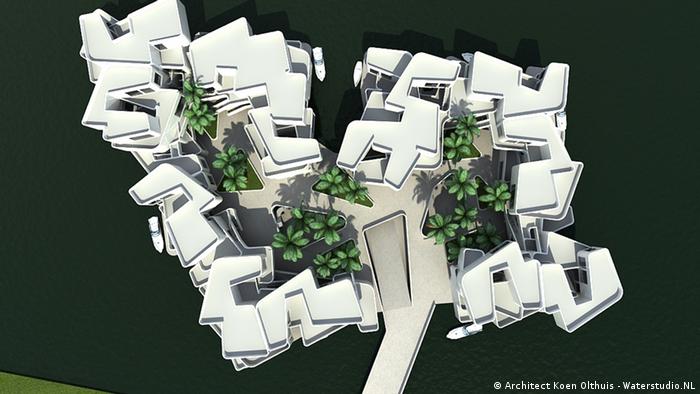 With a full cup of coffee in his hand, Willem Blokker heads up the two flights of stairs to his rooftop terrace. He turns to enjoy the view before settling down on a sofa. "Now do you understand why life just seems like a permanent holiday here?"

The 52-year-old Dutchman lives on one of 43 floating homes in this newly developed area of east Amsterdam, called Steigereiland. Just like a big yacht at dock, all of the houses are tied up to four mooring points.

The place isn't perfect, though. The floating houses do start to rock a bit when the sea gets choppy, says Blokker, even if the architects assured him otherwise. You get used to it though, he adds.

The base of the building is filled with cement and heavy-duty foam. Rings attached to sunken posts make sure the house stays put. They also allow the structure to move up and down, depending on water level. "That's the trick," says Floris Hund from Marlies Rohmer architects, who helped design the settlement.

Special planning for floating apartments is one way Dutch authorities are working to adapt to the effects of rising sea levels and increasing rainfall due to climate change. For the Dutch, small differences in water level fluctuation present a problem that is only going to get worse.

According to experts from the Dutch government's Delta Commission, the sea level will rise in the country by 1.3 meters (4.3 feet) in the next century, and up to 4 meters (13 feet) over the next 200 years. One-third of the Netherlands is situated either at sea level, or below it. 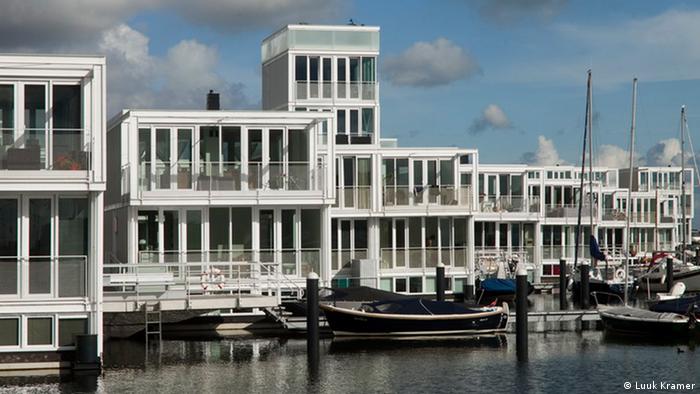 And there's the threat of rising river levels, too. Due to climate change, the rivers that flow into the Netherlands are more full than before, says Pavel Kabat, a climate expert at the Delta Commission.

"You can't just solve the problem with dykes, we have to change strategy," Kabat says. "We shouldn't see water as a danger, but as a chance, as a challenge."

"Leven met water" reflects the new strategy in civil planning in the Netherlands. A major shift is taking place, away from working against increasing water, and instead trying to work with it. Marshes formerly dyked are being re-flooded, defunct canals are being brought back into use and catchment lakes are being built. In other places, some rivers are being dug deeper, and dykes are being moved away from the river's edge.

The city of Nimwegen in the south east of the Netherlands is also undertaking a major project that involves redirecting the Waal River.

"Nimwegen is located way too close to the river - meaning the Waal needs to push through a real bottleneck," explains Ingwer de Boer, director of the Netherlands' Room for the River program. "A type of bypass river will be created, with an island with offices, shops and parks." 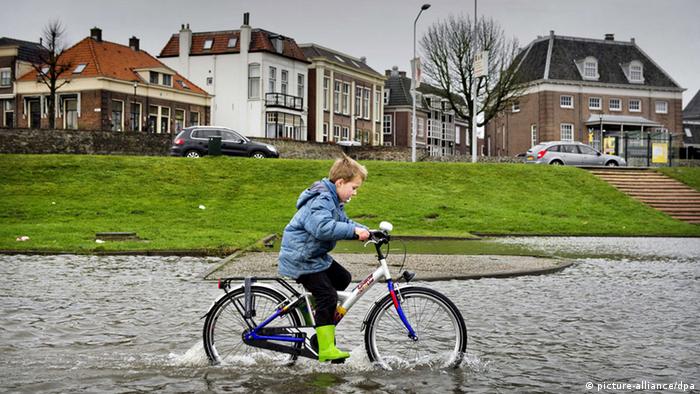 The country's flood-protection program includes 39 such projects, in the areas of the Rhine, Maas, Waal and Ijssel rivers. The efforts should protect some 4 million people in the region, at a cost of 2.3 billion euros ($3.16 billion).

The Netherlands' efforts in combating rising water levels are starting to attract attention worldwide, too. Delegates from Thailand, Vietnam, Australia and the United States have all visited the country recently to meet with Dutch civil engineers, to discuss methods to alleviate problems caused by rising water levels.

'Climate change can affect all of us'

A landmark report by a UN expert panel highlights how climate change impacts societies around the world. While certain factors could affect everyone, developing nations are most vulnerable, co-author Koko Warner says. (31.03.2014)