Flipkart vs. Amazon — the online retail battleground heating up in India | Asia | An in-depth look at news from across the continent | DW | 17.04.2018

Flipkart vs. Amazon — the online retail battleground heating up in India

Five years after entering the Indian e-commerce industry, Amazon dominates the market alongside domestic retailer Flipkart. But that could change with the impending arrival of Walmart. Vasudevan Sridharan reports. 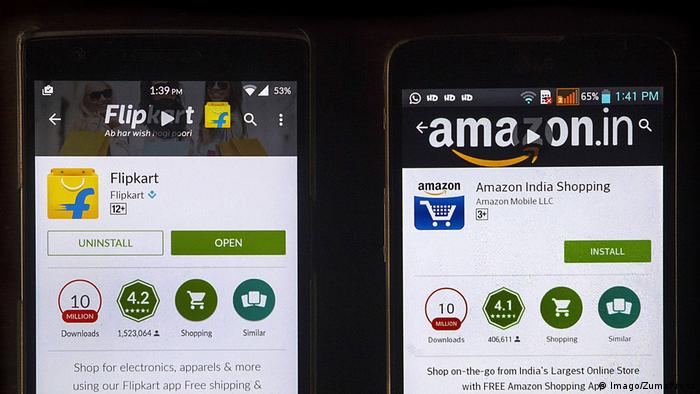 India, the world's second-most populous nation, has witnessed drastic changes to its economy in the last few years. Its e-commerce sector is no exception and is constantly on the radar of global giants. Now, the intense rivalry between home-grown retailer Flipkart and US-giant Amazon is set to get a fresh dimension — Walmart.

The online retail market in India, currently estimated to be worth about $20 billion (€16.1 billion) and set to increase to $73 billion (€58.9 billion) in the next five years, is hard to ignore for any multinational players in the industry. Though forecasts by various agencies differ slightly, all unanimously agree that the sector will expand several times in the coming years, thanks to increasing smartphone penetration and a burgeoning middle class.

Backed by the government's relentless push for a cashless economy, the e-commerce industry is predicted to grow nearly at 17 percent per year, which will play a crucial role in the lucrative $670 billion Indian retail market.

The battle between Flipkart — considered one of India's most successful start-ups and standing at a valuation of about $20 billion — and the recent, but highly successful, addition of Seattle-based e-commerce behemoth Amazon has been raging ever since the latter pitched its tent in 2013.

Now, there are multiple reports suggesting Walmart is in the final stages of acquiring a major stake in Flipkart, which has already raised close to $7 billion from several global investors such as Softbank, DST Global and Morgan Stanley. Some reports speculate the Arkansas-headquartered retail giant could seal the deal by the end of June.

Flipkart is the world's third-highest funded private company and India's most valued internet business with an enviable customer base. The imminent arrival of Walmart, a conventional brick-and-mortar retailer that has been struggling to enter India for more than a decade, will prove significant as Flipkart and Amazon gradually cement the e-commerce sector as an oligopoly. The power and influence of these giants has already seen the demise of smaller players, such as the Delhi-based Snapdeal.

But not one to go without a fight, Amazon is also making a move to acquire the lion's share of Flipkart — so much so that it has even reportedly offered to waive a $2 billion breakup fee, a penalty for the collapse of the takeover process.

Satish Meena, a forecast analyst with the market research firm Forrester, told DW that Walmart had been eying the Indian e-commerce market for the last 15 years. "Now it sees a chance to enter the country through the online retail channel given there is less possibility of any policy changes in the coming years. They see this as the best opportunity."

"For Flipkart, it's not about money. They already have money since they have the backing of Softbank. What Flipkart is looking for is the expertise in running offline and supply-chain management. Secondly, Flipkart wants access to sellers and Walmart has the biggest pool of sellers to sell goods. These are the two things which are driving Flipkart towards Walmart."

When asked about Flipkart's plan to set up a 4.5 million square foot, fully integrated logistics park near Bengaluru, Meena said the Indian company is relatively late when it comes to investing in infrastructure facilities, unlike its competitor Amazon. So far, all three companies — Flipkart, Amazon and Walmart — remain tight-lipped about the latest developments and possible investments.

"I think now the Indian market is gravitating towards this situation, it could very well become Walmart vs Amazon [in India], but the market structure of the 80 percent will remain intact as two foreign players sweat it out in India."

But if the two major players want to remain at the top in India, Prashanto K Roy, head of industry body, Nasscom's Internet, Mobile and E-commerce Council, said they should focus more on "acquiring and retaining customers, building consumer trust and brand loyalty, and dealing with consumer complaints," while confronting existing challenges.

"E-tail [online retail] is just one percent of Indian retail, vs eight to nine percent in China, and customer acquisition here is largely through deals — discounts, cash-backs — which is not indefinitely sustainable. Serious internet penetration with smartphones and broadband users is still low and the next 100-200 million users online, who will be non-English [speaking] and likely have lower literacy and digital literacy, will present even bigger challenges."

India is at the top of the list of nations expected to be worst hit by the adverse effects of climate change. It is striving to overcome the problem by advancing strategies like investing massively in renewable energy. (06.11.2017)