Women's football is so frowned upon by the Taliban that they have allegedly burned down some players' homes. DW spoke to the former national team captain, Khalida Popal, who's trying to get her compatriots to safety.

A group of 32 Afghan women football players and their families are seeking safe haven from the Taliban in third countries after fleeing to Pakistan, the former Afghanistan women's team captain said on Friday.

Women's team captain Khalida Popal told DW that some of the players "had their houses burned down and some family members were taken by the Taliban."

Some 135 people — 32 players and coaches as well as their families — "were displaced from their provinces" because of their involvement in women's football, Popal added.

"They are in Pakistan and we are trying our best to find a host country for them," she said.

Popal told women in the country not to give up: "I am feeling sorry and sad for my people, for especially women in Afghanistan. I want to tell you, stay strong. We are trying our best to help you in any way possible." 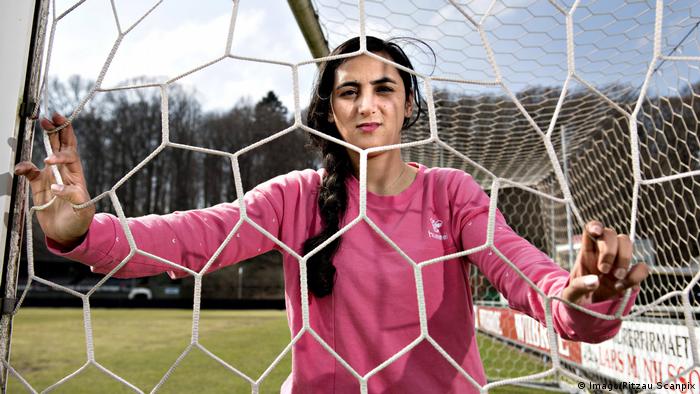 Popal, who now lives in Denmark, said she was happy that some of her fellow soccer players could get out of the country and have the opportunity to play the sport they have grown to love.

"As one of the founding members of the Afghanistan Women's first National Team I found my freedom through football," Popal told DW. "The foundation of women's football was based on standing up for our rights for the women of Afghanistan, but also challenging the culture that was taking the basic human rights from women."

Popal had even warned women and girls who played football to burn their kits and delete their social media accounts back in August when the Taliban seized power.

From the archives: Popal on DW TV on September 9 this year

Over 3,000 women and girls who played football in Afghanistan feared for their lives after the withdrawal of Western forces and the Taliban takeover of the country.

The Taliban had banned women and girls from education or playing sports between 1996 to 2001.

On September 8, a Taliban spokesman, Ahmadullah Wasiq, told Australian broadcaster SBS that "Islam and the Islamic Emirate do not allow women to play cricket or play the kind of sports where they get exposed."

The women's national senior and youth teams were the first to leave the country, securing asylum in Australia and Portugal respectively.

The Football for Peace international organization arranged the departure of Afghan provincial football players and their families to Pakistan throughout September.

The Pakistan football federation received the first group of them at its headquarters in Lahore with red flowers in mid-September.

The world should expect more suffering, instability and displacement in Afghanistan if additional support is not provided to the country, the head of the UN agency for refugees has said.