Finland wins admirers with all-inclusive approach to defense | Europe | News and current affairs from around the continent | DW | 04.10.2017

Finland's comprehensive approach to keeping its population safe is seen as a model for Europe. Constantly honed resilience training prepares the country's military and civilians for deep freezes or deadly foes. 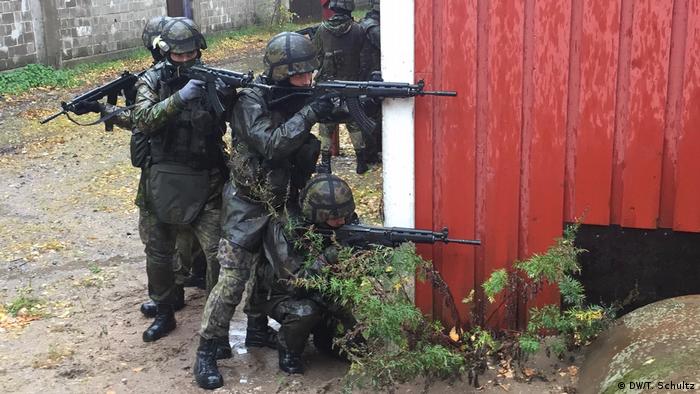 When German Chancellor Angela Merkel declared Europe needs to take more responsibility for its own security due to the Trump administration's ambivalence toward NATO, her public recognition of inadequate self-defense made some countries nervous. Finland wasn't one of them.

President Sauli Niinisto says Finland - with a population of 5.2 million, a border with Russia that runs 1,340 kilometers (833 miles) and just a small professional army of trainers - has spent its century of independence perfecting the art of self-reliance. It's not joining NATO any time soon, if ever.

"We have a huge reserve [of military forces] and they are trained reservists," Niinisto explained to DW this week. "One of the largest in Europe." If Finland called in all its back-ups, officials say, that would be almost a million soldiers. To illustrate his point further, the president explained Finland would then have 5,000 more "men in arms" than Germany would with its reserves, despite boasting a population just one-sixteenth the size.

Though the number of Finns kept in training as active reservists has dropped considerably since its peak in the mid-1990's, the government decided to boost its forces by 50,000 after Russia's annexation of Crimea. The current number of continuously trained reservists now stands at 280,000.

A widely circulated 2015 Gallup poll showed 74 percent of Finns said they'd be willing to take up arms to defend their country - the highest figure by far in Europe. Almost 60 percent of Russians would be willing to fight for their country.  In next highest Sweden, that figure was 55 percent; in Germany, just 18 percent.

In Finland this preparedness is more than an attitude, it's also an ability carefully cultivated throughout society. Due to the country's inescapable geopolitical position, Finland is not among those states that felt comfortable enough to abolish mandatory military service, as did Sweden, Germany and even the Baltic nations. 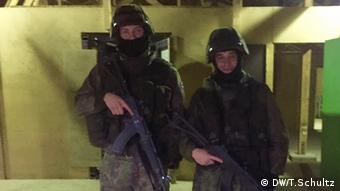 Conscripts in Finland's "Guard Jaeger Regiment" train in the rain on the island of Santahamina.

On a rainy afternoon at a military base at the outskirts of Helsinki, Lt. Col. Rainer Kuosmanen, deputy commander of the "Guard Jaeger Regiment," was watching over conscripts learning the basics of urban warfare. Trainees were learning how to protect the capital if any enemy tried to attack, be it criminal gangs fighting with police or a hostile foreign country trying to invade.

Kuosmanen explained that every year about 20,000 conscripts complete their mandatory duty and 20,000 reservists are given refresher training. The number of women is rising since they were given the right to join in 1995.

Valter Lehtonen and Lauri Leikkila were among the dozens of people training for urban warfare in the forest outside Helsinki on a rainy afternoon. The young men are typical of conscripts in Finland. They are in between law school or master's degrees, looking forward to going back to school after this experience. Asked about their impressions of becoming a soldier for a half-year, Leikkila said he hadn't been expecting to have an experience that looks like an American war movie - "but in fact it did!" Kuosmanen explained that Finnish training involves live-fire shooting within the first week, which he says is unusual.

Both men said some days are more comfortable than others, but they wouldn't think twice about jumping right in if their country came under threat, presuming their counterparts would do the same. 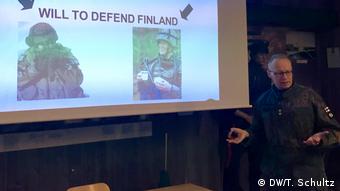 Kuosmanen said that's just the norm in his country. "We have this strong tradition that we can defend Finland, the 'will to defend,'" he said. "In a Finnish family it's part of the core thinking - you have to do your military service."

A society ready for 'homeland defense'

Finland's resilience doesn't just come from having skilled shooters, though, explained Hanna Smith, the director of Strategic Planning and Responses at the newly opened EU-NATO Hybrid Warfare Center of Excellence (CoE). The rest of society joins the military in being willing reservists in their own ways, Smith told DW, with more than 100,000 people having participated in "homeland defense" courses. These trainees range from CEOs of major companies to journalists to principals of schools, so that everyone knows how to play a constructive role if crisis strikes.

Now, reminiscent of the international eagerness to study how Finland's schools manage to continuously rank as "best in the world," other countries are coming to examine this national network of resilience that stretches all the way under the ground, where there are bunkers designed to provide protection for the majority of urban dwellers in case of a life-threatening disaster of any kind.

"We are not perfect and there is still work to be done," Smith said, paraphrasing the Finnish prime minister in his speech inaugurating the CoE Monday. "But," she added, "I do think that the Finnish model relating to this kind of comprehensive security way of looking at integrated responses is something quite unique and there is quite a lot that others could learn from that."

For those that may have other intentions than "learning" in Finland, Col. Kuosmanen shares the military's philosophy. The legend of Finland's victory against the Soviet Union in the Winter War of 1939 credits the outnumbered Finnish soldiers with being tirelessly creative, able to attack by ski, even carrying bicycles on their backs if they needed to cross varied terrain. The country may not be big enough to defeat all foes, but Kuosmanen warned, "we are strong enough to make sure that whatever happens around us, the possible enemy has to think very deeply, would they like to take all those casualties, starting an operation against us?"