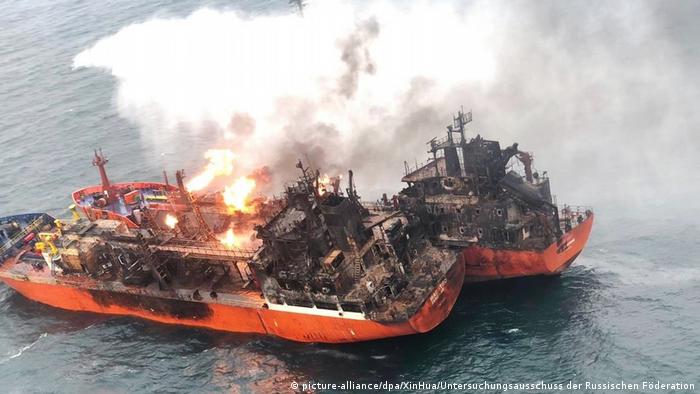 In the Kerch Strait off the Crimean coast, a dangerous undertaking cost 20 people their lives. On January 21, 2019, crews on two tankers were transferring liquified petroleum gas (LPG) from one ship to another at sea. Something went wrong and there was a terrible explosion. Both ships quickly burst into flames.

A search and rescue team tried to locate the burning tankers to rescue the crews. But they lost valuable time. Both ships had loaded illicit cargo and switched off their tracking systems to avoid detection by authorities.

In the end, only 14 sailors could be saved. Most of the victims were Indian and Turkish citizens.

Crew member Erdogan Cetinok (45), who was killed that day, had boarded one of the tankers, the Candy, less than a month earlier in Istanbul. It was his first job with Milenyum Energy SA, which owned both the ships involved in the Kerch Strait incident. Before his death, he told his sister that the ship was sailing for Libya.

In reality, it was more likely headed to Syria. It was later discovered that both the Tanzanian-flagged tankers — the Candy and the Maestro — as well as the company that owned them were on a US blacklist for violating sanctions on Syria.

Erdogan Cetinok's sister Hulya said she believes Milenyum's owners are to blame for the accident and the deaths of the 20 people: "They were hired under false pretenses. What's left behind are the orphans."

Were those behind the disaster in the Kerch Strait part of a broader network of international players directly violating international sanctions on Syria by transporting oil and gas products in an out of the country? Extensive research by a team of more than 400 journalists from 88 countries points in this direction.

Insights into these dubious networks and their forbidden practices come from documents prepared by compliance officers within banks and submitted to the Financial Crimes Enforcement Network (FinCEN), a regulatory unit within the US Treasury Department tasked with fighting money laundering. Financial institutions are required to file so-called Suspicious Activity Reports (SARs) when they have reason to believe that transactions may violate regulations. SARs are not necessarily evidence of wrongdoing. They reflect the views of watchdogs within banks.

In 2019, a cache of such SARs was leaked to BuzzFeed News, which shared them with the International Consortium of Investigative Journalists (ICIJ). Over the course of 16 months, hundreds of investigative journalists evaluated the secret banking reports and additional documents. The result is the FinCEN Files— an extensive investigation into the illicit money flows around the globe.

US and EU sanctions targeting the import,purchase and transport of oil and petroleum products to and from Syria have been in place since 2011. In August 2015, in an attempt to weaken Syrian President Bashar al-Assad's support network, the US Department of the Treasury (USDT) announced new sanctions directly targeting individuals and companies providing energy products used by the Syrian regime.

Among these newly blacklisted entities was Milenyum Energy. The company is registered in Panama and operates in Turkey. The USDT maintains that Milenyum made regular shipments of oil products to the Syrian port of Baniyas. As a consequence, its oil shipping vessels were blocked.

The company's director, Ufuk Kenar; two of its managers, Serkan and Erkan Duzgoren; and another employee, Mustafa Aydin; were all individually sanctioned. 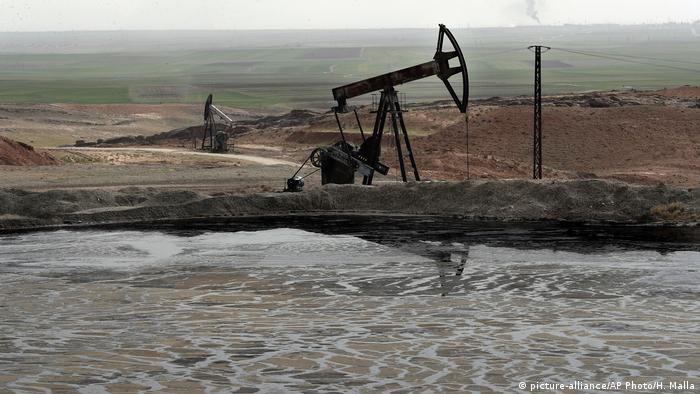 Drilling for oil in Syria

Blue Energy, a company closely linked to Milenyum and registered in the Caribbean island state of Saint Kitts and Nevis, was also affected. According to the USDT, Milenyum used its partner Blue Energy to receive payments for those energy-related shipments.

But despite US and EU sanctions, tankers owned by Milenyum Energy continued their activities, with their vessels shipping oil products in and out of Syria just as before. Their forbidden transactions weren’t discovered until the fatal explosion in the Kerch Strait, which killed Turkish sailor Cetinok and 19 others.

It turned out that one of Milenyum's sanctioned tankers, the Green Light, was sailing under a new name: Maestro — the vessel that went up in flames alongside the Candy.

Connecting the dots between Turkey, Malta and Syria

Information gleaned from the FinCEN Files suggests that bigger players, such as Petkim — Turkey's premier petrochemical company — may also have been involved in Milenyum and Blue Energy's illegal operations with regard to Syria.

Founded in 1965, Petkim Petrochemical Holding began as a state-owned petrochemical manufacturing company. Petkim was privatized in 2008 when the Turkish state sold its 51% stake in the company to the SOCAR & Turcas Consortium. In 2012, SOCAR, or the State Oil Company of Azerbaijan Republic, bought Turcas' shares and is now the majority owner. The remaining shares are traded on the Istanbul Stock Exchange.

The trail of FinCEN documents pointing towards Petkim begins in Malta. The files show that in 2016 US Bank BNY Mellon filed a Suspicious Activity Report relating to a firm called Petrokim, a company based on the Mediterranean island. Malta is considered a tax haven. According to the US bank, Petrokim is associated with the Turkish Petkim. Malta, an EU member state, is considered a tax haven

BNY Mellon provided foreign correspondent banking services to Petrokim, helping it to conduct business abroad. While doing so, the US bank noted that the company completed 223 cash transactions amounting to more than $224 million between March 2010 and July 2016. Its report indicated that suspicious money transactions suggested Petrokim may have violated sanctions on Syria.

Furthermore, it described the company as "a shell-like entity maintaining an address in the high-risk jurisdiction of Malta," adding that Petrokim was "using an address that is identical to numerous entities that were designated SDNs under Iran sanctions." SDNs is the abbreviation for "Specially Designated Nationals" who are blacklisted. SDNs can be individuals or companies. Their assets are blocked, and US persons are generally prohibited from dealing with them.

According to BNY Mellon, both "shell-like" Petrokim and Turkish oil giant Petkim completed over $90 million in "suspicious transactions" between March 2010 and January 2016. Milenyum business partner Blue Energy, which the USDT claims to be involved in the illicit trade of petroleum products to Syria, was also among the companies with which Petrokim exchanged payments — over $13 million worth of transactions between July and December of 2014.

BNY Mellon's listing of Petrokim as an associate of Turkey's Petkim was confirmed in the ICIJ's 2017 Paradise Papers investigation. Research conducted for the Paradise Papers showed that Samir Karimov, who served as vice president of SOCAR Turkey at the time, was also the director and legal representative of Petrokim. At this time, SOCAR was the majority owner of Petkim.

The relationship between Petkim and Petrokim was also confirmed in Petkim's financial records. There Petrokim was listed under liabilities, as Petkim was behind in payments to its Malta-based associate.

Companies respond to the allegations

Between 2009 and 2017, Petrokim was administered by the law firm Fenlex, which is also based in Malta. In response to questions from the ICIJ, Fenlex denied that Petrokim was "involved in trades in breach of the US (or European) sanctions in force at the time in connection with Syria."

Fenlex further stated that Petrokim "did not transact with Syrian entities, nor did it tranship any goods to or from Syria."

The oil firm Petkim and its majority shareholder, SOCAR, refused to comment on the allegations.

An investigation into the 2019 Kerch Strait ship blaze is ongoing, with Milenyum Energy director Ufuk Kenar and managers Serkan and Erkan Duzgoren, as well as the captains of the Candy and the Maestro, all on trial. The next hearing will take place in Istanbul on November 20.

Hulya Cetinok, who lost her brother in the accident off the Crimean coast, wants to be hopeful for the upcoming trial. But she also has her doubts after the captains of the ships were released in a previous trial: "As the relatives of the victims of this disaster, our only expectation is that justice be served and those responsible get the sentence they deserve."

No matter how dodgy the deal, profits are everything. That was clearly the motto at Deutsche Bank — and attempts to justify the wrongdoing uncovered by the FinCEN scandal seem pointless, writes DW's Henrik Böhme.