Filmmaker Afineevsky: ′Not a welcome guest in Russia′ | Europe| News and current affairs from around the continent | DW | 08.10.2015

Filmmaker Afineevsky: 'Not a welcome guest in Russia'

Evgeny Afineevsky's "Winter on Fire" documents the uprising in Ukraine. Before the Netflix premiere on Friday, DW talked to the director about the dramatic events in Kyiv and the impact of his documentary. 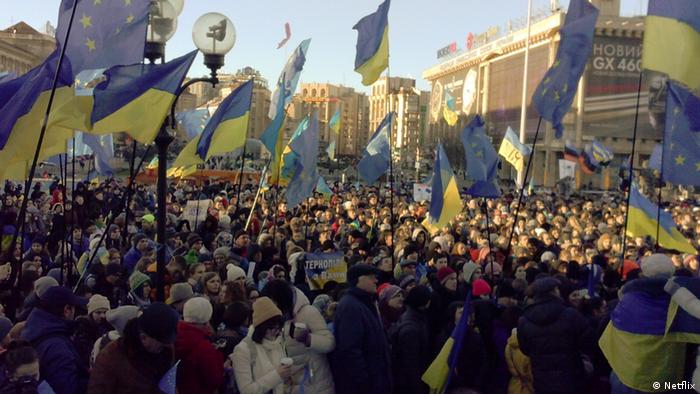 Screams and gunshots can be heard at the beginning of the documentary "Winter on Fire: Ukraine's Fight for Freedom." A teenager's voice says: "Do something for the revolution!"

The American director, actor and scriptwriter Evgeny Afineevsky, who was born in the former USSR, came to Kyiv at the end of 2013 to capture the protests on the capital's main square, Maidan Nezalezhnosti. The events forced him to stay in Ukraine much longer. His video footage eventually turned into the documentary, first aired at film festivals in Venice and Toronto and soon to hit online video service Netflix. There, it has the chance to reach a much wider audience than other documentaries about the dramatic events in Ukraine.

Deutsche Welle: You were born in Kazan, in the Republic of Tatarstan (in the former USSR). Later, you emigrated to Israel, nowadays you are living in the USA. Why was it so important to you to tell the story of Ukraine? 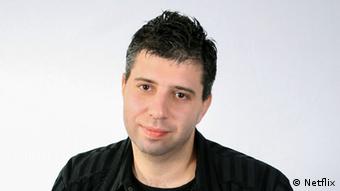 Evgeny Afineevsky: It is not about me being Russian, Ukrainian or Israeli. I think the movie itself points out an amazing fact: that it's not about nationalities on Maidan. For example, Serhiy Nigoyan, who was killed first, was Armenian, but Ukraine was his home, so he gave his life for its future. The second one was Mikhail Zhyznevsky from Belarus. The Maidan events reflect an amazing solidarity between people of different nationalities, social backgrounds, generations. It is very important to me to deliver this message to the entire world. Also, the Maidan protests reflected an amazing unity between the people and the church. While the church became a tool of the government to control people in other circumstances and other countries, in this case the church was on the people's side.

"Winter on Fire" has already been screened at the film festivals in Venice and Toronto before its premiere on Netflix. How did the audience receive it? 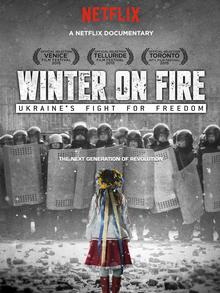 At the Venice Film Festival, the documentary was received with standing ovations

The reception at the Venice Film Festival was outstanding. We had a 15-minute standing ovation. People were crying, they felt the pain of the characters in the movie, they were applauding the heroes. Then we showed the movie at the TIFF in Toronto, where we received the "People's Choice Documentary Award." I think this proves that people really loved the movie.

The Maidan protests have been depicted in different books, TV-shows and documentaries. What do you think about the relevance of this topic today?

I am not a politician, I am a filmmaker. In my view, history was made there. I think the topic is still essential nowadays. This is still a top story.

Those who killed and injured people during the protests have not been punished yet. Does your film seek to accuse them?

My movie is just a historical document. I am not accusing anybody. I am sure that the law will be fulfilled and justice will prevail. But my role is not to create justice. We help in our way: a lot of our footage was taken into consideration for investigation by the proper institutions in Ukraine.

Nowadays Russian movies and TV-shows that glorify the Russian army and police are banned in Ukraine, some books and artists who support Putin have been blacklisted. How do you feel about that?

I am not here to judge what the government decides to do these days, how they fight for their freedom or how they fight against their enemies. I haven't been to Russia for a couple of years and I am not planning to go there at the moment. I am probably not a welcome guest there. But there are filmmakers everywhere and all of us deserve freedom of expression and freedom of speech.

It all started on Maidan square. In fall 2013, hundreds of thousands of Ukrainians took to the streets of Kyiv to topple the government and drive President Viktor Yanukovych from power. (07.04.2015)

Poroshenko: 'Ukrainians died for the right to be Europeans'

In an interview with German broadcaster ARD, President Poroshenko has reiterated Ukraine's desire to join NATO. The statement came on the anniversary of the protests in Kyiv that sparked the ongoing Ukraine crisis. (30.11.2014)