Filipino fishermen face double burden of COVID and Chinese expansion | Asia| An in-depth look at news from across the continent | DW | 26.05.2021

China's expansion into contested waters in the South China Sea has been a longtime problem for fishing communities in the Philippines. Now, a pandemic-fueled economic downturn has made things even worse. 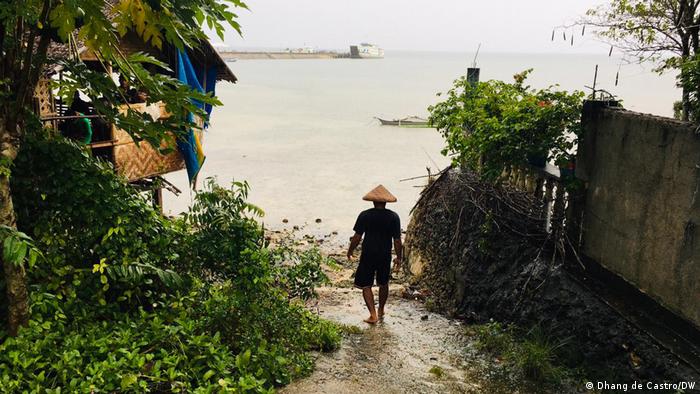 "We do not even have enough fish to feed our families. ... We will starve," a fisherman says

Flaring tensions in disputed areas of the South China Sea, and coronavirus-related lockdown measures complicating distribution of fish catches, are threatening the survival of Filipino fishermen, according to activists.

Members of BIGKIS, a collective of fishermen from the northern fishing provinces of Zambales and Pangasinan, have said the presence of Chinese boats in the Philippines Exclusive Economic Zone (EEZ) hampers their fishing activities.

In addition, quarantine-related checkpoints prevent the transport of catch from closer municipal waters to larger fishing markets, forcing the collective to sell their catch at a loss.

Vicente Pauan, 35, told DW that fishers like him had been affected by China’s "aggressive" encroachment in the South China Sea since 2012, when Beijing started building military structures on islands and atolls in the region.

"We do not even have enough fish to feed our families. We sell at a loss and are buried in debt. We will starve," Pauan said.

Alternative livelihoods such as construction work have disappeared because of the economic slowdown brought on by a prolonged pandemic lockdown.

"Our fishermen are cornered. We are not only speaking about livelihood here but also the right to live," Ria Teves, president of the grassroots NGO Peoples Development Institute, told DW.

Beijing claims almost the entire South China Sea, although the Permanent Court of Arbitration in The Hague ruled in 2016 that China's claims were inconsistent with international law.

Annually about $3 trillion (€2.45 trillion) worth of ship-borne trade passes through the contested waters, which are also rich fishing grounds.

In March 2020, tensions between the Philippines and China came to a climax after hundreds of Chinese boats were spotted in the disputed portions of the South China Sea.

China's embassy in Manila has denied the presence of militias.

The president said that the 2016 ruling by the arbitration tribunal in The Hague was "a scrap of paper that should be thrown in the wastebasket."

In July, Duterte said China was "in possession" of the South China Sea.

"China is claiming it. We are claiming it. ... China has arms. ... We do not. It's as simple as that. ... What can we do?" Duterte said in response to  criticisms that his administration had not done enough to assert the Philippines' South China Sea claims.

He also warned that Duterte's statements could have major repercussions for Filipino fishermen.

"You are allowing the largest fishing fleet in the world into our waters while discouraging our own fishermen. ... Duterte doesn't care about Filipino fishermen," Carpio said.

"It is very sad. Our commander-in-chief, the one tasked to protect our territory, does not want to defend our sovereign rights," he said, adding that Manila is unlikely to challenge Beijing with Duterte in charge.

After weeks of ministers speaking out against China's conduct in the contested waters, Duterte issued a gag order on May 17, preventing his cabinet from speaking on the South China Sea in public.

Duterte maintained that the Philippines would defend its rightful territories and instructed maritime patrols to continue.

"The chief executive is consistently defeatist when it comes to China. In that regard, China has already won a strategic victory over us," Custodio told DW.

Political analyst Richard Heydarian, however, said the pushback on Duterte's China stance from such high-ranking officials as the foreign and defense secretaries indicate that Duterte does not have unilateral influence on foreign policy.

Though they have no territorial claims, Western powers have recently directed their naval assets in the South China Sea to challenge China's expansion in the region.

But the multinational show of force may not tip the scales in favor of the Philippines.

"The shared naval passage is where our interests converge, but it is only us who can defend our fishing rights," Jay Batongbacal, director of the University of the Philippines Institute for Maritime Affairs and Law of the Sea, told DW.

"China has a population of over 1 billion that it needs to feed. There is nothing ideological or even political about that, it is simply practical," he said.

"We will get less and less fish because we cannot control China's overfishing. We may soon see the collapse of our fishing sector, " Batongbacal added.