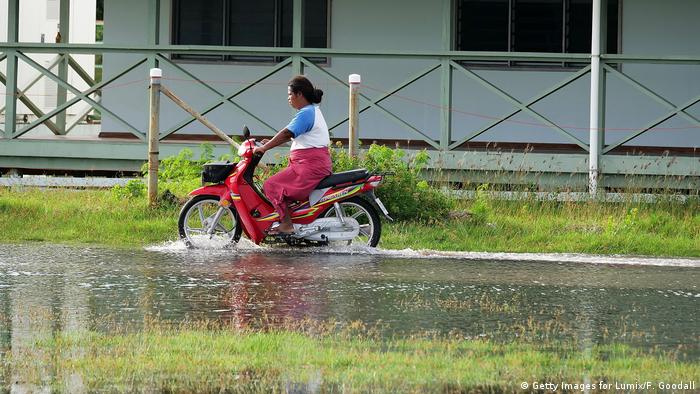 Frank Bainimarama, Fiji's prime minister, accused Australia of contributing to climate disruption Monday, urging Canberra to "do everything possible to achieve a rapid transition from coal to energy sources that do not contribute to climate change."

The general-turned-Fijian premier, who was the United Nation's honorary host at COP23, a large climate conference in Bonn, Germany, in 2017, was addressing a pre-summit event on Tuvalu.

Australia, which is focused on China's growing influence in the Pacific rather than its own climate policies, is likely to face mounting and clamorous Pacific island appeals for Canberra to decarbonize its economy to fulfill global targets set in the UN's 2015 Paris climate treaty.

Cutting emissions would help to restrain polar ice melts and hence rising sea levels that threaten many islands in the Pacific region.

Australia 'far away' from climate target

The Berlin-based Climate Analytics (CA) institute puts Australia among the top emitters of carbon dioxide — from both fossil-fuel combustion and farming — projecting that by 2030 Australian greenhouse gases will lie 8.6% higher than baseline 2005 levels.

At Paris it committed to a 26-28% reduction, says the institute.

That would place Australia "far away” from reductions promised, says Climate Analytics, with Australians emitting "more than twice as much per person as the average of the Group of Twenty (G20) nations in terms of greenhouse gas emissions."

Canberra knew "very well” that it had to take smaller Pacific island nations seriously as regional partners if it was "to move forward” in the vast region, said Sopoaga.

Another member, Palau, last week warned "big brother” Australia that its lack of action on climate change risked damaging its standing among other PIF leaders.

Morrison, a climate skeptic, backed the giant Adani coal mine project in Queensland ahead of his conservatives being re-elected at Australia's election in May. He campaigned on retaining mining jobs and keeping energy prices down.

Morrison, in a pre-forum statement carried by Reuters Monday said Australia would donate A$500 million (€301 million) to Pacific islands for renewable energy projects to "confront the potential challenges they face in the years ahead."

"We are subject of geopolitical maneuvering and strategies of others,” said PIF secretary-general Damen Meg Taylor, adding: "The Blue Pacific collective remains focused on charting our own destiny.”

For China, its potential interest includes fisheries, seabed minerals, naval routes and an opportunity to diplomatically isolate Taiwan, which it regards as renegade.

Briefing a British parliamentary committee last month, veteran conservationist Sir David Attenborough, referring to fisheries reproduction along reefs, said it was "appalling” that Australia's Great Barrier Reef off Queensland was being wiped out by bleaching caused by "rising temperatures.”

"If you wipe that out, you wipe out whole areas of the ocean,” said Attenborough.

"The problems in 20-30 years are going to be major problems that are going to cause great social unrest, changes in what we eat, how we live," Attenborough told parliament's energy committee.

Pacific Islands Forum, based in Fiji