Armenian and Azerbaijani forces have clashed along the front lines of the separatist Nagorno-Karabakh region. At least 30 fighters died as both sides blamed the other for the renewed fighting. 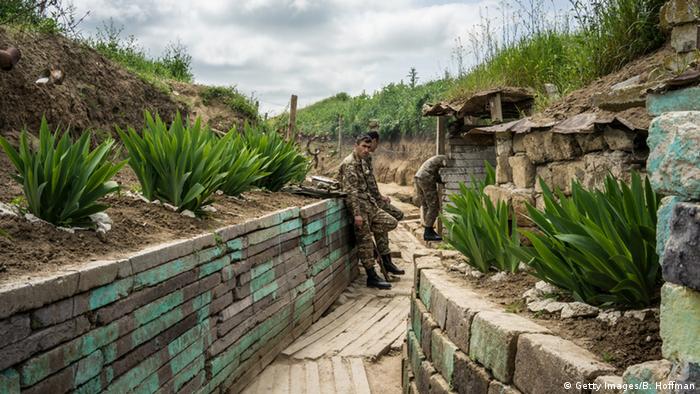 Officials from Armenia and Azerbaijan accused each other Saturday of violating a cease-fire after fighting broke out on the front lines of the disputed Nagorno-Karabakh region, which lies inside Azerbaijan but is under the control of ethnic Armenians.

Armenian President Serzh Sarkisian said in a televised statement that 18 ethnic Armenian soldiers had been killed and some 35 others injured in the fighting. He did not, however, specify whether the soldiers belonged to separatist forces in Nagorno-Karabakh or Armenia's regular forces.

Earlier, a spokesman for the separatist Nagorno-Karabakh region's president said that a 12-year-old boy had been killed and two other children wounded by Azerbaijani missile fire.

Azerbaijan's foreign ministry said one Azerbaijani citizen had been killed.

The Armenian Defense Ministry said it had used warplanes, tanks and artillery to penetrate into Nagorno-Karabakh, adding that "Azerbaijani authorities bear all responsibility for the unprecedentedly supercharged situation."

An Azerbaijani defense official gave the opposite account, saying that Armenian forces had fired mortars and large-caliber artillery shells across the front line, with some shots hitting civilian residential areas.

Similar violence was reported last month as a two-decade-old conflict that has left some 30,000 people dead continues to simmer.

War broke out over Nagorno-Karabakh in 1991 during the dissolution of the Soviet Union when ethnic Armenian separatists backed by Yerevan seized control of the region, which had formed a part of Azerbaijan during the Soviet period. A ceasefire was called in 1994, but there have been sporadic clashes since.

The region is now under the control of local ethnic Armenian forces and the Armenian military, and receives heavy military and financial backing from Armenia.

Years of negotiations brokered by the Organization for Security and Cooperation in Europe have failed to resolve the dispute, and Azerbaijan has repeatedly threatened to take back the rebel region by force if no progress is made.

Armenia, which is a close military ally of Russia, has said it can repel any offensive against the region.

Russian President Vladimir Putin called for an immediate end to the fighting Saturday and said both sides should "exercise restraint in order to prevent further casualties," according to Kremlin spokesman Dmitry Peskov.