Female Circumcision Threatens Girls in Germany | Germany | News and in-depth reporting from Berlin and beyond | DW | 04.05.2004

Female circumsion isn't just a problem in African countries. In Germany, as many as 6,000 girls of African origin are also threatened by the gruesome ritual. 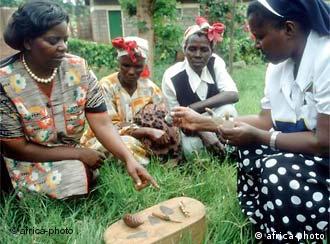 Educational campaigns in Africa aim to end the practice.

Germany is home to at least 24,000 women from African countries who've undergone female circumcision, or, as many experts call it, female genital mutilation (FGM). That's because the practice involves either the full or partial removal of a woman's external genitalia, and has painful physical and psychological consequences.

Jeanette Zachäus of the German human rights organization "Aktion Weisses Friedensband" says the daughters of some African immigrants in Germans are potential victims of FGM -- about 6,000 girls.

"We became aware of the problem through Somalian women living here in Germany, who were going to German doctors. They said it was difficult to get treatment when their doctors didn't know much about FGM," Zachäus told Deutsche Welle.

Her organization has launched a new initiative, supported by the Society for German Technical Co-operation and women's rights groups such as Terre Des Femmes, to raise awareness about FGM, and put a stop to the practice. "Aktion Weisses Friedensband" has also started an educational campaign aimed at German doctors, to make them better able to treat women and girls who've undergone FGM.

The practice is a culturally sanctioned tradition in about 30 African countries. But Zachäus says an awareness campaign is needed in Germany, because African families living here often take their four- to seven-year old daughters back to their home country to be circumcized.

Jawahir Cumar is a Somalian woman living in Germany. She was circumcized as a young girl, and now works for the organization "Stop Mutilation," which mainly runs awareness programs in Africa to educate people about the devastating effects FGM has on girls and women. But she's also active in Germany.

"Here, we invite women who've been affected by FGM to meet with us, so they can speak to other women. No men are allowed to be there. And when we work in Africa, we drive from village to village and speak to parents. We also go to schools there and show the students posters and photos of what the circumcision operation looks like." 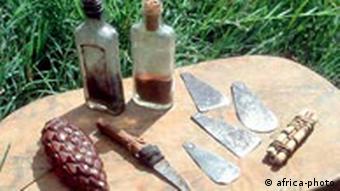 The photos are shocking. The operations are often carried out with little or no regard to hygiene. The girls aren't given any sedatives. Their genitals are cut with dirty razor blades, knives, or shards of glass. Many of the girls die from the operation, because of infection, injury, or AIDS. The girls who survive often have their vaginal openings sewn closed, only to be cut open again on their wedding night.

"The people who promote female circumcision sometimes give religious reasons why the operations are necessary. And sometimes, they give health reasons, for example, that women who haven't undergone circumcision aren't able to bear children later in life," said Christa Müller of "INTACT," an international initiative against FGM.

"Another reason you hear is that uncircumcized women aren't as attractive as those who've been circumcized. I would say that it's the men's interests that play the largest role. A man has an interest in knowing that the woman he marries is a virgin. And she shouldn't be able to take too much pleasure from sex, so that she won't have affairs with other men. He wants a guarantee that the children she bears are from him," Müller said.

"Aktion Weisses Friedensband" and its partner organizations are trying to counter these cultural beliefs and replace them with a new message: No religion requires female circumcision, and its practice goes against every person's right to bodily integrity. According to the United Nation's Declaration on Human Rights, female circumcision is both a form of child abuse, as well as an infringement of a person's basic rights.