Shut-down of the reactor at Yongbyon indicates that Pyongyang is having trouble cooling the plutonium production plant and that a failure in the cooling system could trigger 'the release of radioactivity.' 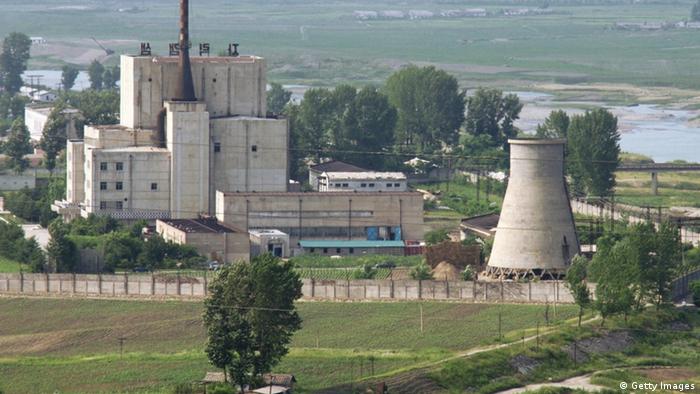 Atomic energy experts are expressing concern over the problems that North Korea appears to be experiencing at its Yongbyon Nuclear Scientific Research Center, which has been reportedly shut down earlier this year when the supply of cooling water from a nearby river was halted.

Analysis of satellite images by the US-Korea Institute at Johns Hopkins University, released on the 38 North website, suggest that extensive rainfall and flooding in July 2013 dramatically altered the course of the Kuryong River away from the facility and may have filled collection cisterns and ponds with sand or river silt, as well as destroying pipes to deliver the cooling water to the reactor.

Images show that steam was released from the turbine building in February, suggesting that the turbines had been halted down ahead of the reactor shutdown, while snow had collected on the normally warm roof of the reactor building.

North Korean engineers were quickly called in to carry out excavations and the construction of a new dam, the institute confirmed, but the repairs appear to be insubstantial.

"Despite these short-term fixes, the danger posed by an unreliable supply of water for the Yongbyon reactors remains, particularly since the channels and dam constructed are made from sand and could be washed away by future floods," the US-Korea Institute warned. In the event that the secondary cooling system for the five megawatt reactor was to fail, it added, the result would be a fire in the graphite core and the release of radioactivity into the surrounding environment. 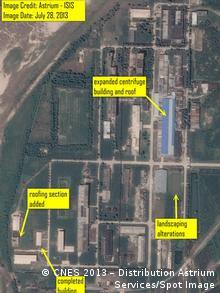 There has been no reaction from Pyongyang to the international concerns

Even a minor accident could cause a leak, given North Korea's lack of experience in dealing with such problems, while an incident involving the experimental light-water reactor that is presently under construction would be potentially far more dangerous.

"Pyongyang has no such experience operating the new facility, the first indigenously built reactor of its kind in North Korea," the institute pointed out. "The rapid loss of water used to cool the reactor would result in a serious safety problem."

There has been no reaction from the North Korean government to the analysis, although the concerns that are raised ring true to those monitoring the regime and its activities.

"I have talked to officials and experts from other countries who have been to Yongbyon and they told me they were just nervous to be there," Daniel Pinkston, a North Korea analyst with The International Crisis Group in Seoul, told DW.

"North Korea is not famous for its labor standards or its attention to safety, and it is all pretty shoddy," Pinkston said. "And once it has been built, the same sort of technology conflicts will be in play, with safety standards at Yongbyon unlikely to be anywhere near as stringent as they would be in the rest of the world."

And if a disaster such as that which struck Japan's Fukushima Dai-Ichi nuclear plant in March 2011 can happen in a heavily regulated and closely monitored atomic energy sector, it is hard to imagine the potential impact of an accident at Yongbyon, he added.

"This is absolutely cause for concern," Pinkston added. "Made worse by the fact that there is no monitoring by the [International Atomic Energy Agency], no international assistance to the nuclear sector, no transparency in what they are doing there, no oversight and very little likelihood they are operating according to international safety standards."

Developments at the site are being monitored by the South Korean authorities, which would be the neighboring country that would bear the brunt of any leak of radioactivity.

In her speech to the recent Nuclear Security Summit in The Hague, South Korean President Park Geun-hye stated that a nuclear accident at Yongbyon could cause more devastation than the meltdown of the reactor at Chernobyl in 1986.

And while analysts say that is unlikely, given the relatively small scale of the reactor in North Korea, it would cause serious concerns in northeast Asia, trigger panic in local populations, and heighten already elevated military tensions.

"Ideally, North Korea would be willing to open the plant to international observers and accept advice and help with running the facility, but that is clearly not going to happen," Go Ito, a professor of international relations at Tokyo's Meiji University, told DW. 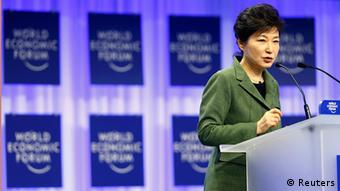 "There has to be concern in Japan and all the other nations in the region if something did go wrong at Yongbyon," he said, adding that the facility is around 30 km from the west coast of the peninsula and about 60 km from the Chinese border.

There is also evidence that the people of North Korea themselves are increasingly aware of the danger posed to their health by the regime's commitment to developing both nuclear energy and atomic weapons.

A study of defectors carried out by the UK North Korean Residents Association showed that while Pyongyang insists that the people are firmly behind its development of a nuclear capability, the truth is very different.

Defectors say they fear wells they used for drinking water have been contaminated with radioactivity.

"Which ordinary North Korean would oppose the idea of using the vast sums of money spent on nuclear tests to resolve their food shortages?" asked author Kim Joo-il, secretary general of the organization. "Who would ever welcome the spread of birth deformities and a host of other diseases caused by radiation exposure?"