Far-right rally in Chemnitz marks one year since murder

A racist group called supporters to the streets in Chemnitz to mark the anniversary of a man's death in a 2018 knife attack. The local football team rebuked fans after racist chants were heard during Saturday's game. 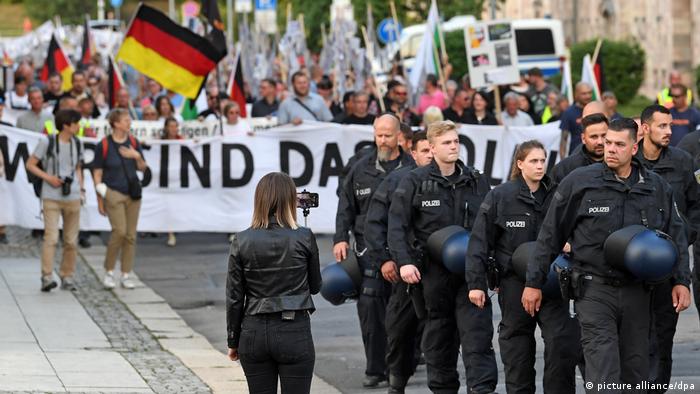 Though organizers planned for 1,000 supporters, police say 450 people took part in a rally called by an extreme-right "citizens' movement" to mark one year since a knife attack left a man dead. Hundreds of counter-demonstrators were on the scene to confront Pro Chemnitz and its supporters on Sunday.

More than 600 officers were also drafted in from across the state of Saxony, as well as neighboring Saxony-Anhalt and Thuringia and the federal police force. Officers temporarily arrested a man for raising his hand in the Hitler salute as part of the Pro Chemnitz demonstration — an act banned under German law. Two men from opposing camps were cited for publicly insulting one another. Last week, a 23-year-old from Syria was sentenced to nine-and-a-half years in prison for the August 26, 2018, killing of a 35-year-old who died after being stabbed in a fight during Chemnitz's city festival. A man from Iraq is being sought in Germany and abroad. In the weeks following the killing, racists took to the streets for mass demonstrations, even chasing down people of color as they saw them.

Forty thousand people rallied against racism this weekend in Saxony's capital, Dresden — the largest protest there since the Berlin Wall fell. State Premier Michael Kretschmer, a Christian Democrat, offered support for the rally, called by Unteilbar (Indivisible), but didn't join because anti-fascists were present.

The third-division Chemnitz Footbal Club (CFC) rebuked supporters for racism over the weekend. According to a statement released by the club, fans called CFC sporting director Thomas Sobotzik a "Jewish pig" and chanted "At least Daniel Frahn is not a negro." Sobotzik had sacked the former team captain earlier this month after he repeatedly showed support for racist hooligan groups.

In March, hooligans mourned Thomas Haller, a racist leader and former head of the CFC security firm, who died of cancer. In the 1990s, he founded the group HooNaRa, short for Hooligans-Nazis-Racists.

Frahn was given a warning, four-game suspension and €3,000 ($3,300) fine after waving a T-shirt that reading "Support your local hools!" and was sacked by the club in August, when he was seen socializing with hooligans after a league game. The 2018 rallies against immigrants drew a contingent of CFC supporters, and hooligans were out in force again at Sunday's demonstration.