Far-right demonstrators face off with counterprotesters in wake of girl′s murder | Germany | News and in-depth reporting from Berlin and beyond | DW | 03.03.2018

Last December, a German teenager was murdered by her former boyfriend, an Afghan refugee. The small town of Kandel has seen its streets hijacked by heated demonstrations of Germany's competing attitudes about migration. 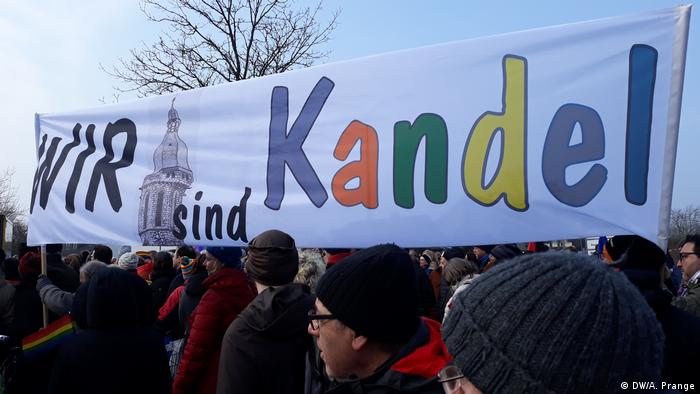 "Child murderers!" a group of right-wing protesters shout at Armin, an artist from the small German town of Kandel. Armin had left a sign for the thousands of demonstrators who descended on his town on Saturday: "Piss off."

"They are exploiting a local tragedy for their own ends," one of his neighbors says. "We just want to live peacefully together."

The tragedy she's referring to is the death of 15-year-old Mia V., who was stabbed to death in front of a local drugstore by her ex-boyfriend, an Afghan refugee, on December 27. After her death, it emerged that she and her parents had gone to the police multiple times to report the youth's aggressive behavior.

Since then, the case has taken on a life of its own — striking a nerve around the country as Germans become increasingly polarized in their attitudes toward migration.

The case is how this wealthy town of only 8,000 inhabitants found itself at the center of four competing demonstrations on Saturday. Thousands of protesters representing dozens of groups — from the far-left antifa (anti-fascists) and the youth wing of the Greens to the neo-Nazi NPD and the far-right Reichsbürger movement — filled the tight medieval streets.

"We are protecting ourselves and our children from migrants," says a member of the right-wing Alternative for Germany (AfD) party who came all the way from Heidelberg. "The politicians have failed us. I don't feel safe letting my 16-year-old daughter go out on her own at night." 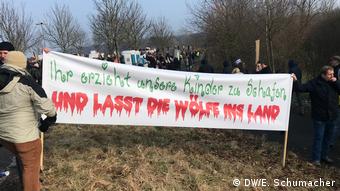 "You turned our children into sheep then invited in the wolves," charged these demonstrators

She is one of the many women — far more than one usually sees an at AfD convention or a far-right rally — who've come to protest.

Around her is a dense crowd carrying German flags and banners reading "You turned our children into sheep then invited in the wolves." After a speech from the AfD state lawmaker Christina Baum, the audience begins to chant "Resist! Resist!"

It was the AfD, together with a "women's rights" group called Kandel ist überall, (Kandel is everywhere) that called the original demonstration, calling on supporters from all over Germany to join in the march — and come they did, from Bavaria, from Dresden, from Berlin.

'We don't want to have anything to do with it'

"They're all strangers," a member of the town's Wir sind Kandel (We are Kandel) group tells me. "We don't want to have anything to do with it. What a scandal, making that girl's parents see her death used in this way." 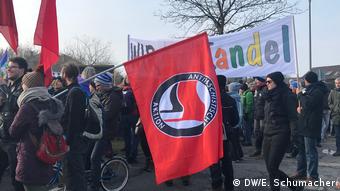 But the town of Kandel has been hijacked by both sides, which are kept apart by a heavy police presence. Playing folk music and carrying rainbow banners, a group of counterdemonstrators has arrived to "show those racists some resistance. Germany has to be more careful than most about creeping fascism."

Antifa demonstrators, faces covered, bring up the rear, chanting "Nazis out! Together against racism!"

Kandel has become a microcosm of Germany's internal divisions. But, although the demonstrations were ostensibly called in her name, Mia V. is hardly mentioned, and her parents have likely already moved away. That the townspeople want to be left in peace, that they've been threatened, that the mayor has received death threats: these don't seem to even register to the protesters, who have found a convenient place to set up their soapboxes.