Fact check: Russian arms train not sabotaged by partisans | News and current affairs from Germany and around the world | DW | 28.04.2022

A video shows a derailed train with tanks and military equipment. Allegedly a Russian arms delivery for the Ukraine war. However, our fact check shows that the clip has nothing to do with the current war. 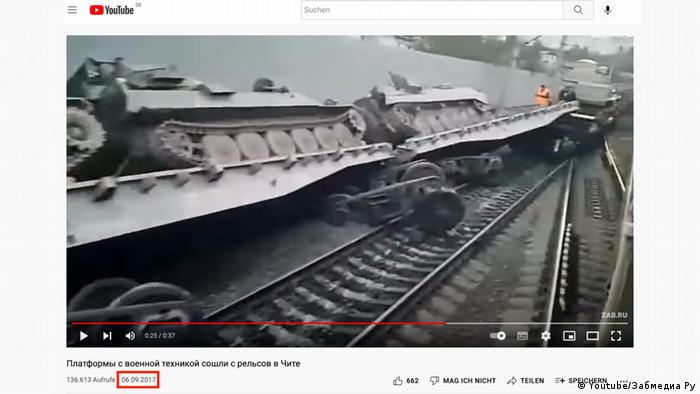 The video shows a derailed freight train carrying tanks, personnel carriers and other military equipment. A 37-second clip, shot from a passing train, captures the scene. It reportedly shows a military train on its way to war in Ukraine, allegedly somehere near the city of Bryansk, just over 100 kilometers from the Ukrainian border. The result of partisans fighting Russia's military on Russian soil?

Claim: "A video believed to have been taken near Bryansk. Part of the military train of the Russian Armed Forces derailed," according to a Telegram user. "They don't even manage to transport their equipment," a Twitter user mocks, calling the Russian soldiers "orcs." And for one Facebook user, the case is clear: "partisans" have successfully sabotaged the Russian train.

The video has nothing to do with the war in Ukraine and in fact predates Russia's invasion. We took a screenshot from the clip and then did reverse image searches with Yandex and Tineye. Result: the earliest versions of the video are from September 6, 2017, long before the Russian invasion of Ukraine in 2022.

Further hits among the search results lead us to several media articles about the 2017 incident. For example, inforesist.org reported that eleven military cars and three passenger cars derailed in Chita, Russia. The vgudok.com platform published several photos of the incident, showing that the derailment occurred at a switch on the tracks near Chita. And ren.tv wrote that the accident occurred on the line between Chita-2 station and Antipikha.

Since the two locations are only seven kilometers apart, this further narrows the search for the site of the incident. Photos of the accident site show the course of the railroad line, the landscape and the buildings along the tracks. Using Google Earth, we were able to verify that the accident happened on a curve shortly after the Chita-2 station.

Some 6000 kilometers from Bryansk

Conclusion: The train accident wasnot only almost five years before the Ukrainian war, but also a good 6,000 kilometers away from the alleged site at Bryansk. It cannot be attributed to partisan fighters in the context of the Ukrainian war.

More fact checks on the Ukraine war can be found here.

Manipulated photos, false statements, state propaganda and deepfake videos are all part of the war between Russia and Ukraine. We debunk some examples and show how to see through the deception.

Fact check: How to spot a fake military success story in Russia-Ukraine war

Russia's invasion of Ukraine has prompted viral videos claiming military success on both sides. But can you trust the images of drone strikes, snipers and ambushes? DW unpacked one video in search of the truth.