Seventy years after the battle of Stalingrad, a historian has published long-forgotten eye-witness accounts by Red Army soldiers and civilians. The sources open up a new perspective on the events of winter 1942/43. 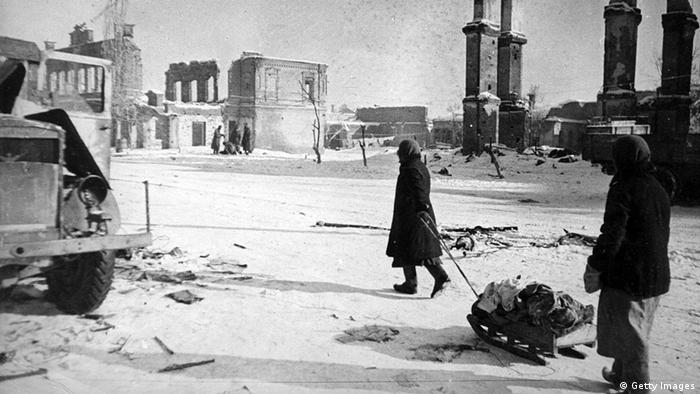 In a long chain, starving and ragged men departed from Stalingrad, the metropolis on the Volga. The German soldiers were watched over by armed Red Army troops, though they were too weak to flee. Their eyes were empty; they could barely stand.

These images from the first few days of February 1943 are burned into the German collective consciousness. National Socialist propaganda painted the defeat as a great act of self-sacrifice. 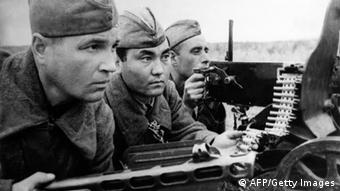 Red Army soldiers pictured during the battle of Stalingrad in 1942

That was a myth. The 6th Army of the German Wehrmacht had taken Stalingrad six months earlier. In late fall 1942, the Red Army encircled the Germans and recaptured the city, house by house.

Historians in the trenches

But the suffering of civilians and Russian troops at Stalingrad has long been blanked out. Around 40,000 civilians are estimated to have died in the city during the German bombing campaign. Around 480,000 Soviet soldiers were killed, more than twice as many as on the German side.

In his new book "The Stalingrad Protocols," the German historian Jochen Hellbeck has provided a detailed examination of the experiences of Soviet civilians and soldiers during the bloody battle for the city.

The occasion for the book is the rediscovery of unique and authentic sources from the time of the battle. "A group of historians in Moscow questioned 215 eye-witnesses and recorded their conversations. Among them were generals and commissioners, but also soldiers and civilians," Hellbeck, a professor at Rutgers University in the US, explained.

Some of the conversations were even recorded in the trenches. The transcripts were kept under lock and key for decades. Now Hellbeck has analyzed the material together with Russian historians.

The accounts given by civilians are particularly unsettling, like that given by kitchen hand Agrafena Posdnjakova. After German troops marched into the city, the mother of six children was forced out of her house. Posdnjakova and her family held out in a ditch: "On (September) 27, there was heavy artillery fire. My husband and my little girl were killed, and we were trapped." 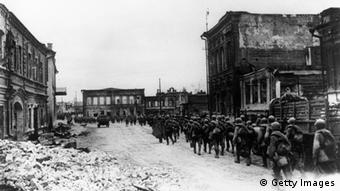 Soviet soldiers reached the city on the Volga on January 22, 1943

She later described the struggle for food: "Then, when the Germans were surrounded, they themselves ate horse meat. They left us the legs, the head and the offal. Towards the end there wasn't even that anymore. They kept everything for themselves and left us just the hooves and the offal."

"No stone should remain unturned," was Hitler's order before the attack. The civilian population was to be forced into the steppe or taken as slaves. The deportation and expulsion of the citizens of Stalingrad began immediately after the German invasion. Thousands of people were forced to register at meeting points on a daily basis.

When the Soviet counter-offensive began, an estimated 15,000 civilians remained in the city. Hungry and freezing, they bedded down among ruins and in holes in the ground. Their city was almost completely destroyed.

Orders given by the Russian leadership were just as horrific. Stalin had given order Number 227: "No going back." The dictator also refused to allow civilians in the city to be evacuated before the beginning of the military assault.

His merciless attitude didn't only have to do with the strategic importance of the city on the Volga. "Stalingrad was named after Stalin. For that reason, the capture as much as the defense of the city was a political issue for both sides," explained Torsten Diedrich from the Center for Military History and Social Sciences in Potsdam. He wrote a biography about the German commander-in-chief in Stalingrad, Friedrich Paulus, exploring the German perspective on the battle.

The unyielding orders from Hitler and Stalin also had an impact on the interpretation of the battle in historical research. "In the German accounts of the 1950s, Stalingrad was portrayed as a struggle between two dictators, for which hundreds of thousands sacrificed," Diedrich explained.

But this version of events has long been considered out-dated among academic researchers. Jochen Hellbeck emphasized that by focusing too heavily on the two dictators, equivalence is created between the two regimes and two populations. "Then both of them look like victims. But the German side led a war of aggression. For the Russians, World War I became a war of liberation against fascism." 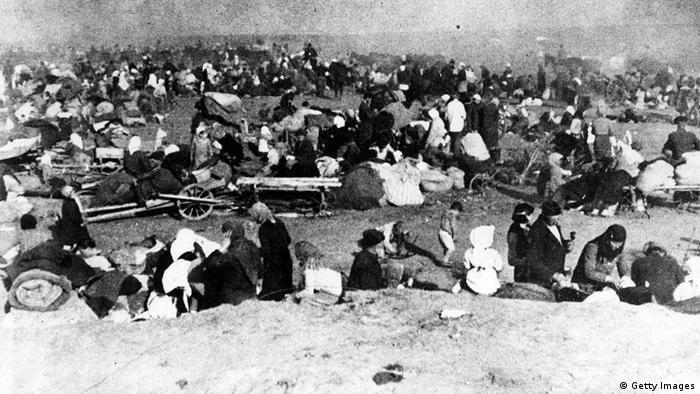 Women, children and elderly men were forced out of the city to avoid Nazi shelling

The Stalingrad transcripts show that Soviet soldiers viewed the fight against Hitler's Wehrmacht as a war of liberation against fascism. "The communist commissars in the Red Army understood how to exploit patriotism in order to mobilize people and move them to fight against a 'fascist aggressor,'" Hellbeck said.

But are the interviews regarding the motivations of soldiers really reliable? After all, opponents of the Stalin regime feared for their lives. Torsten Diedrich is certain that the book written by his colleague Hellbeck adds to our understanding of the battle. However, he warned against an all too uncritical examination of eye-witnesses as historical sources.

"The interviewers were historians, not party functionaries. Aside from that, the majority of interviews were recorded at the time of the Red Army's biggest triumph to date. There was room to talk about earlier weaknesses," Hellbeck countered.

One thing is certain: Until now, such a large number and such authentic eye-witness accounts have never been accessible to an audience outside of the Soviet Union. They show that the old cliché, that soldiers and civilians were drawn into the battle out of fear of Stalin's regime, is no longer tenable. Instead the records are the testaments of people who willingly fought and sacrificed themselves because they wanted to liberate their homeland from the aggressors. 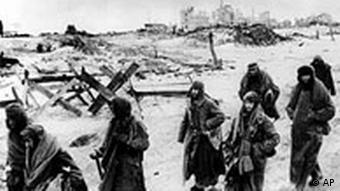 German soldiers surrendered to the Red Army on January 31, 1943

Does the history of Stalingrad need to be re-written? "No," Hellbeck said. "However, the transcripts broaden our perspective and bring us away from the viewpoint of the German choreography: attack, encirclement, surrender," he explained.

Historians agree on the significance of the battle: Stalingrad marked a moral turning point in the Second World War. For the Red Army, the victory was an outright triumph that brought new hope. In Germany, the myth of the unbeatable Wehrmacht was destroyed.

Among the German soldiers trapped amid the horrors of war, the sense of disillusionment spread: They were the first to realize that they had served an inhumane dictator, to whom their lives meant nothing. But that's the most significant insight which the transcripts deliver: Stalin was not only a German tragedy, but Russian too.