The ultranationalist National Democratic Party (NPD) failed twice to convince lower-level courts that its campaign ad was legal. Germany's highest court agreed with the party and wants the commercial to be aired. 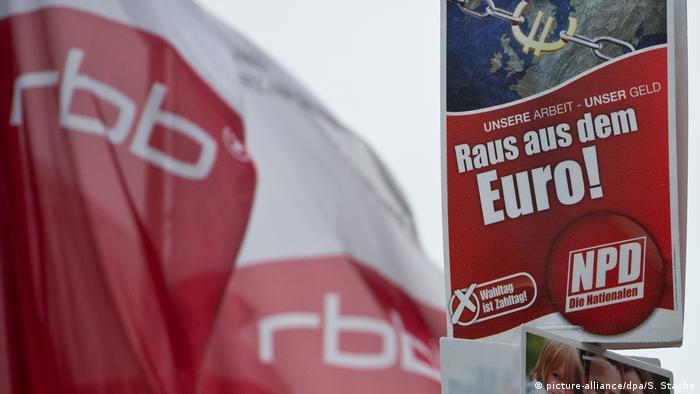 The judges dismissed the argument by the broadcaster, which covers the states of Berlin and Brandenburg, that the commercial's content constituted hate speech.

The court also rejected a lower court's ruling that the NPD's political positions and manifesto were relevant to any interpretation of the commercial. The content of the ad itself was the only relevant factor, it said.

The commercial shows images of crime scenes and references  the recent mass influx of refugees: "Since the arbitrary opening of the border in 2015 and the uncontrolled mass immigration since then, Germans have become victims almost every day."

The NPD appealed to the Constitutional Court after two lower-level courts sided with RBB.

In April, Germany's highest court had ruled in favor of public broadcaster ZDF's decision not to broadcast a previous version of the ad.

In a similar dispute, Bavaria's public broadcaster BR aired an NPD radio commercial on Tuesday morning, having initially resisted in the courts in Munich.

The NPD is the most prominent ultranationalist party currently active in Germany.

It has one seat in the European Parliament and several hundred seats in municipal assemblies throughout Germany. It has no representatives in the German parliament or in any of the 16 state parliaments.

Mainstream lawmakers have twice requested that the Constitutional Court ban the NPD as a threat to the democratic system. The most recent attempt failed in 2017 after judges ruled that the party was too small to pose a genuine threat.