Extreme-right defectors deal a blow to Germany′s far-right AfD | Germany | News and in-depth reporting from Berlin and beyond | DW | 11.01.2019

The far-right Alternative for Germany may be unravelling at the edges after a disgruntled member struck off on his own. That's bad news for the populists ahead of key elections, says DW political analyst Jefferson Chase. 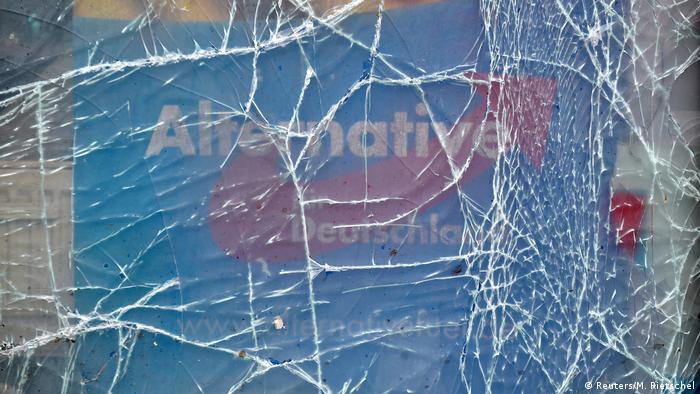 There is now even more right-wing alternative to the Alternative for Germany (AfD).

On Thursday, the former party leader in the eastern German state of Saxony-Anhalt, Andre Poggenburg, resigned his party membership. Only hours later, the far-right hard-liner announced that he is forming a party of his own, the "Aufbruch deutscher Patrioten" (Uprising of German Patriots), to compete with the AfD.

Poggenburg was one of the more extreme nationalist and xenophobic leaders within the AfD, which twice censured him for using language reminiscent of right-wing extremism. He has close ties to the radical Identitarian and Pegida movements. And for much of his career he was also an ally of Thuringian AfD leader Björn Höcke, who is regarded as one of the main motors behind the AfD's ethnic-nationalist hard-line wing and who has often been accused of anti-Semitism.

In 2016, Poggenburg became the leader of the opposition in the Saxony-Anhalt regional parliament, but he stepped down last year from that position and as regional party leader following controversial anti-Turkish remarks. The emblem of Poggenburg's new party, a blue cornflower, has been criticized for having right-wing extremist and Nazi connotations.

Reaction to Poggenburg's defection among AfD members has been mixed. Some hard-liners have rued his departure, while members of the relatively moderate Alternative Mitte group have welcomed it. Regional parliamentarian Uwe Junge, for instance, tweeted: "Andre Poggenburg is leaving the AfD! Finally. I hope he takes all the extremist fools and self-proclaimed patriots with him."

A limit to the AfD's move right?

The 43-year-old may not have been universally liked within the AfD, but party leaders have to be concerned that Poggenburg's supporters could follow him and defect — a scenario that has some precedent.

The Alternative for Germany was founded in 2013 primarily in opposition to European monetary union. But a lack of electoral success shifted the focus to hostility toward mass migration. Co-founder Bernd Lucke was replaced by the far more conservative Frauke Petry as party head in 2015.

That shift roughly coincided with Chancellor Angela Merkel's decision not to close Germany's borders as large numbers of refugees and migrants began arriving from Syria, Northern Africa, Afghanistan and other places. That brought a surge of support for the AfD from Germans who feared that large-scale migration would threaten their way of life and the country's traditions.

Since 2015, the AfD has moved further and further to the nationalist, some might say racist right, guided by such figures as current party co-leader Alexander Gauland, Höcke and Poggenburg. That evolution has come to the dismay of more moderate AfD members, including Petry, who became increasingly marginalized in the run-up to the 2017 German federal election.

The party recorded an impressive 12.6 percent of the national vote and eventually became the main opposition party in the Bundestag. The triumph prompted Gauland to promise to "hound" Merkel and Germany's traditional political parties.

But the day after the vote, Petry and her supporters quit the AfD. That meant the parliamentary group immediately lost three seats. Petry subsequently formed the Blue Party, but it has yet to contest any elections and has attracted very few members.

The schism with Poggenburg and his supporters could be far more damaging than the split with Petry. For starters, this is the first time that a rival group has formed to the right of the AfD. And it comes as the party had hoped to kick-start its stalled momentum with three regional elections in its stronghold of eastern Germany: Saxony and Brandenburg on September 1 and Thuringia on October 27.

After becoming Germany's third-largest party at the national level in 2017, the AfD failed to dramatically increase its support in regional elections in 2018. The populists came in a distant third with just over 10 percent of the vote in Bavaria and fourth in Hesse with slightly more than 13 percent.

The AfD continues to attract some 13.5 percent support in opinion polls, but the far-right populists have been outstripped by the Greens, who have been polling 18 to 20 percent.

The AfD does attract 20 to 25 percent support in the east, but splits like those with Petry and Poggenburg could see erosion on both ends of the AfD's spectrum of voters. Petry, who is from Saxony and won her constituency outright there in 2017, could siphon off moderates. Poggenburg, who was also born and bred in the formerly Communist east, could take away some hard-line far-right and extremist voters.

Many mainstream political analysts have predicted, perhaps with an admixture of wishful thinking, that the tug of war between relative moderates and hard-liners could rip the AfD apart at the seams. That remains a very hypothetical scenario — at the time of writing, Poggenburg's new party has a grand total of 10 Twitter followers.

But arguably more than any other German party, the AfD's appeal relies on the perception that it represents a popular movement that is inexorably growing in strength. The latest discord undercuts the idea of the AfD as a truly viable alternative.