Exploring one of the hottest places on earth in Ethiopia

Located 100 meters (328 ft.) below the sea level and with one of the most extreme climates on earth, the Danakil depression in Ethiopia has multi colored landscapes which look like from an alien planet. 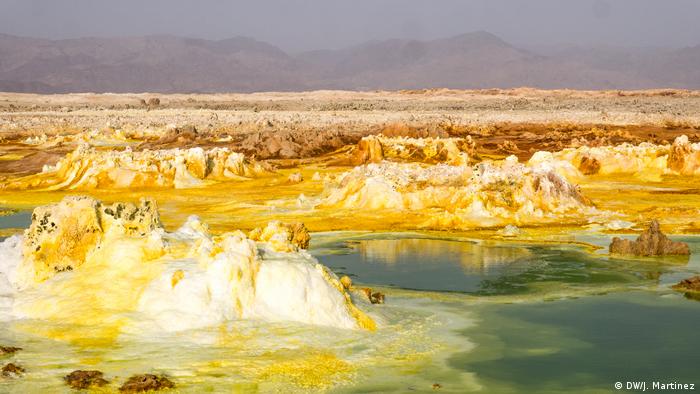 "This is not a tour, it's an expedition," said Teshome Ayele, one of the few tour operators who offer tourists the experience of visiting the hottest place on earth, based on average temperature. We had been traveling for more than 8 hours by car from the northern town of Axum. Along the way we had already crossed mountains with beautiful views, small villages and even a couple of Eritrean refugee camps making it a very tiring and long ride. However, it was worth every minute when you know you are about to visit one of the most incredible spots on Earth. 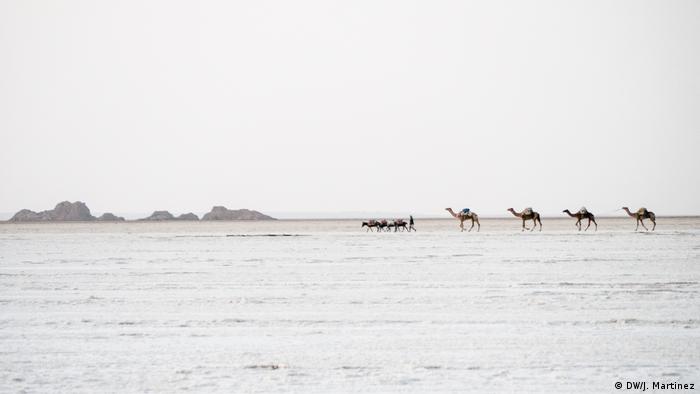 Located in the northeast of Ethiopia and very close to the border with Eritrea, Danakil is a geological curiosity. It is located at the junction between three tectonic plates and with Africa and Asia moving apart, some of the strangest landscapes on the planet have formed here. Its geological structure is so different from anything else, that geologists and scientists investigate here what life might be like on other planets. 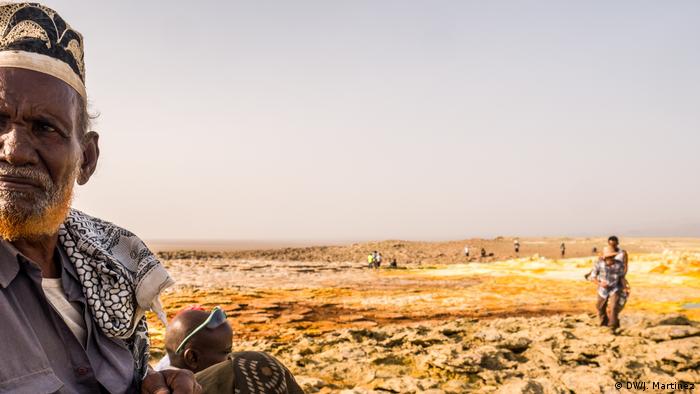 The day was almost over, but the temperature outside was still around 43°C (109° F). We arrived at the salt mines of Lake Karum, the first stop in Danakil. Workers at the salt mines labor long hours in some of the most extreme temperatures on Earth. "Locals here are used to this intense climate,"  Teshome tells us. "They even walk dozens of kilometers under the sun with only a couple of bottles of water." Strolling around the area we saw some locals, the Afar people, leading groups of 10-12 camels carrying salt. These so called camel trains transport the white gold of Ethiopia from the lake to the small city of Mek’ele. A journey that can take a week.

Surrounded by nothing, the salty soil in combination with the huge amounts of salt dust in the air created a white filter in front of us. For a moment I felt like I was inside a colorless box.

Once the sun set, different tones of pink started illuminating the sky, creating a perfect silhouette of the camel caravans leaving for Mek’ele. With temperatures of 40°C at night and with a hot glass of whiskey in hand, we celebrated the end of a long journey and the start of a great adventure. 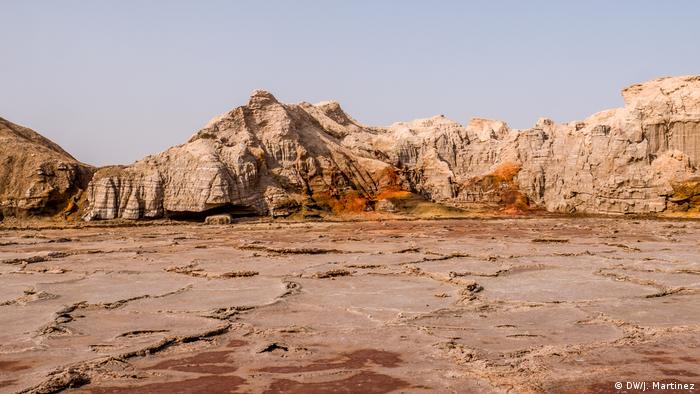 Not far from the salt mines of Danakil, rock formations with different tones of red are formed

A tour to the Danakil depression has to be planned in advance and is never a low-cost experience. Tour operators must apply for a lot of permits and the situation in the region has been more than a little volatile over the past years. Only guided tours are allowed to visit the area and every one of these tours needs to be accompanied by a military escort. Accommodation and facilities are minimal and basic, but I guess visiting Danakil is not a journey for those looking for luxury.

After spending the night on a wooden bed under the starry sky, we visited Dallol, a cinder cone volcano which simply looks like an alien planet. White, red and neon-yellow formations of minerals, iron and salt create a fantasy world landscape. Dallol was part of the Red Sea millions of years ago. However, the sea evaporated due to the high temperatures and left behind the salt lakes as a reminder of its past.

Exploring acid pools in extreme weather conditions makes Dallol a must-see destination for adventure lovers. The scenery leaves every visitor speechless and a tour of this place is truly impressive as you see something you simply can't find anywhere else on Earth.

The time spent in Dallol is not long, but still, it's enough to leave a lasting impression of nature's magnificence. 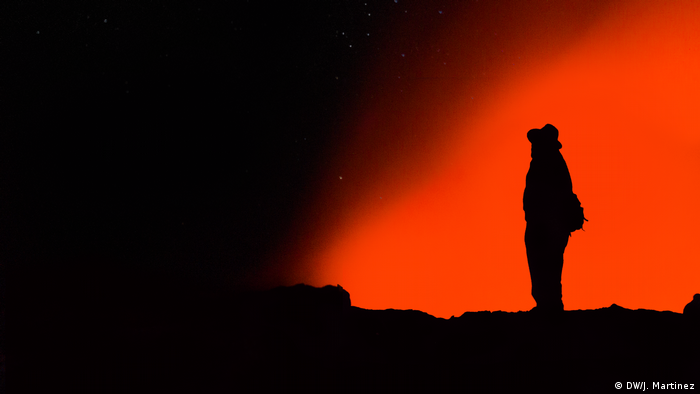 While Dallol is the visually most impressive spot in Danakil, Erta Ale is the most adventurous! Locally known as the "Gateway to Hell", Erta Ale is Ethiopia's most active volcano and one of the few places in the world where visitors get the chance to see a lava lake just meters away.

After more than 8 hours of driving (3 of those through irregular volcanic rock), we arrived at Erta Ale's base camp, a small military camp located 12 km (7.5 mi) from the crater. Here tour companies leave their vehicles and prepare for the 3-hour hike to the volcano. With no more than just a small backpack each, my group and I started hiking uphill at 9pm and with the smoke of the volcano and a red silhouette behind the mountain as our target, we reached the crater at around midnight. 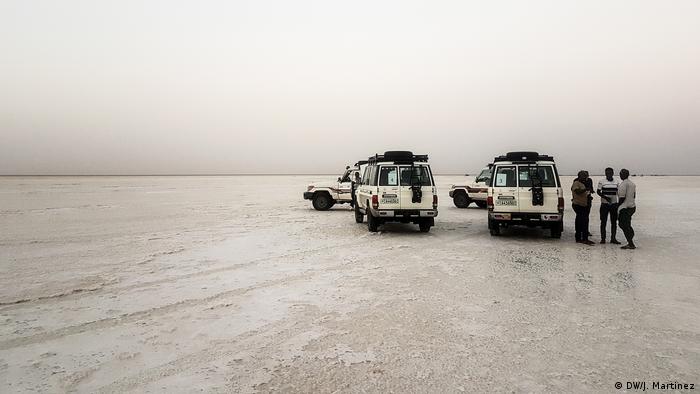 This is not an easy journey. The path is dark, temperatures are high and the sharp rocks on the way can hurt you if you lose your footing. However, the view from the top and the fact that you are literally sleeping meters away from lava, make this journey worthwhile and definitely a once in a lifetime experience. 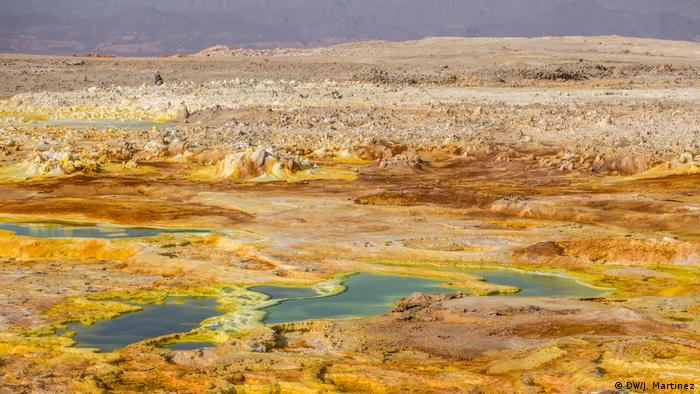 A visit to this part of the world is not a dream experience for every traveler. But if you are looking to see one of the most extraordinary places on Earth in the most natural way possible, Danakil should be on top of your list. From the colorless views in Karum, the neon sceneries in Dallol to the black lava in Erta Ale, a trip to Danakil is a journey through an entire spectrum of colors that, every once in a while, will make you forget you're still on planet Earth.

Take a dip in the world’s most exclusive pool

Considered the world’s most instagrammed hotel and welcoming over one million visitors per year, the Marina Bay Sands is more a tourist spot that happens to be a hotel. Its infinity pool is Singapore’s main attraction. (21.03.2018)