Speaking to DW, FDP lead candidate Christian Lindner recommended focusing on finding safe refuge for Afghans in "the immediate vicinity." He also criticized Merkel for failing to engage with a conflict she "inherited."

The leader of Germany's pro-business Free Democrats recommended supporting Afghanistan's neighbors and helping them receive people who might flee the Taliban takeover.

"We should not expect people who are fleeing to have to travel the long and dangerous journey to Europe. That's why there needs to be a first option for humane accommodation in the immediate vicinity," he told DW in an exclusive interview ahead of September's election.

Once this safe refuge nearby was secured, Lindner said, then various international organizations like the UN Refugee Agency or the International Organization for Migration could assess the situation and see what to do next.

On Afghanistan, refugees and the 'lessons of 2015'

Lindner called for an emergency EU leaders' summit, saying it was already long overdue, to seek a shared policy on how to approach the problem.

When asked why Germany couldn't take swifter action by itself if necessary, Lindner cautioned that doing so in 2015 during the so-called migrant crisis had caused friction with European partners.

"The situation [in Afghanistan] is not directly comparable with Syria in 2015. But nevertheless, we should learn the lessons of 2015," Lindner said.

"I would not do things in the manner of Austrian Chancellor [Sebastian] Kurz, who said right away nobody would be taken in. I consider such a unilateral approach to be wrong. But then, in turn, it would also not be right for Germany to name a number [of people it was willing to take] and to go it alone. That's why I am appealing for a shared European Afghanistan policy."

Asked what lessons could be drawn domestically from the sudden collapse in Afghanistan following the withdrawal of NATO troops, the 42-year-old called for the establishment of a new national security council.

"There's a lack of systematic coordination between the Chancellery, Foreign Ministry and Defense Ministry. We therefore need to create different structures in Germany in the future, too. I strongly believe that we need something like a federal security council, for institutional coordination between the departments active in foreign policy, and information exchange on the highest level. Besides the ministries I just mentioned, I would also include the Ministry for Economic Development."

A similar proposal has already been floated by the CDU's lead candidate for chancellor, Armin Laschet. Of all the German parties, the CDU/CSU alliance would be the FDP's most natural potential coalition partner. Currently logging a little over 10% support, depending which opinion polls you refer to, the FDP is battling with the far-right AfD and the Left Party to be the fourth largest party in Germany. It could emerge as a crucial kingmaker in coalition negotiations.

However, Lindner also criticized outgoing Chancellor Angela Merkel of the CDU for not paying enough attention to Afghanistan. He said he believed that Merkel always saw the conflict as one she "politically inherited," having taken office in 2005, arguing that she "never really saw this mission in Afghanistan as her own."

"You just have to ask yourself the question, when was Mrs. Merkel last in Afghanistan?" Lindner said.

Merkel made several trips to Afghanistan as chancellor but the most recent was a 2013 troop visit. She only once visited her Afghan counterpart, Hamid Karzai at the time, during her first term in 2007. Lindner said he would have expected more, "given that Germany was the second-largest provider of troops by the end." 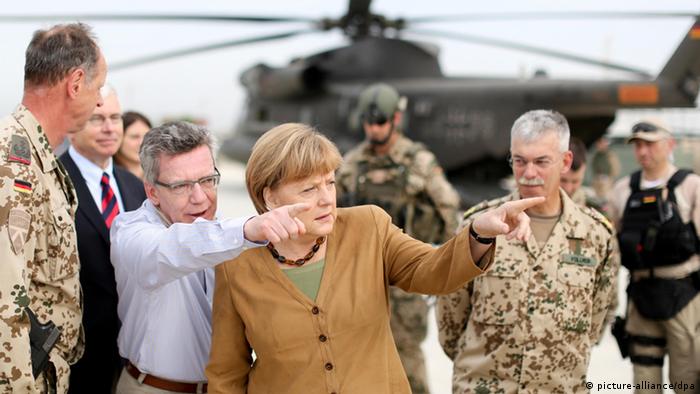 This one-day troop visit with then-Defense Minister Thomas de Maiziere on May 20, 2013 was Angela Merkel's most recent trip to Afghanistan

On balancing human rights and global trade and cooperation

Lindner was asked how these two planks of FDP's identity could coexist in foreign policy — how it was possible to promote trade with countries with dubious human rights records.

He said there were "very many countries" in the world that did not meet "our personal standards on human rights, democracy and the rule of law," but that it was necessary "to recognize as a realist" that there can be different levels of cooperation.

"For example, if we were to really make everything dependent on our human rights standards, then we might even have a problem with the US, because it still uses the death penalty," Lindner said.

On China: No more business as usual

Yet, despite this warning about very few international partners being perfect, Lindner also said he would take a tougher line on China than German governments have in recent years, not least in light of developments in Hong Kong. Asked by a Chinese DW viewer how his approach would differ, Lindner said:

"We need more determination and less kid gloves than we have seen in the past years from Mrs. Merkel and her government. The People's Republic of China has violated international law and doesn't uphold the minimum standard of human rights. In international trade, their demeanor is downright imperial, and they operate with dumping prices. We cannot just continue as before with a country like that."

He added that the EU's pending investment deal with China, provisionally agreed earlier this year, "should not be ratified" given the status quo.

When challenged on trade considerations, namely the huge share of German carmakers' sales in China, he quipped: "German cars are so good that I fear no blackmail."

Lindner took a similarly tough stance where Russia was concerned, calling for tougher sanctions and more engagement with opposition groups in the short term. However, he also said it would be "great," if many problems could first be solved, to one day seek closer ties between Europe and Russia, potentially even including free travel and trade deals.

Finally, the 42-year-old was asked about the legacy of Angela Merkel, after his party ruled in coalition with her Christian Democrats during her second term. Having criticized her policy at earlier junctures, Lindner focused on the positives.

"She put her intellectual gifts and all her skills and strength into the service of our country. That deserves very great recognition. When it comes to the political scorecard, other more objective souls than myself should probably be the judges."

The interview was conducted by DW's Editor-in-Chief Manuela Kasper-Claridge and Jaafar Abdul-Karim.

Opinion polls indicate that no two-party coalition would manage to secure a majority following the general election on September 26. Several three-party combinations would be possible. Here's an overview.

Energy crisis: Germans call for help from the government 01.09.2022

People in Germany are beginning to feel the pinch, in the face of skyrocketing electricity, fuel, and food prices. As inflation rises, concern is mounting — and so is dissatisfaction with the government.