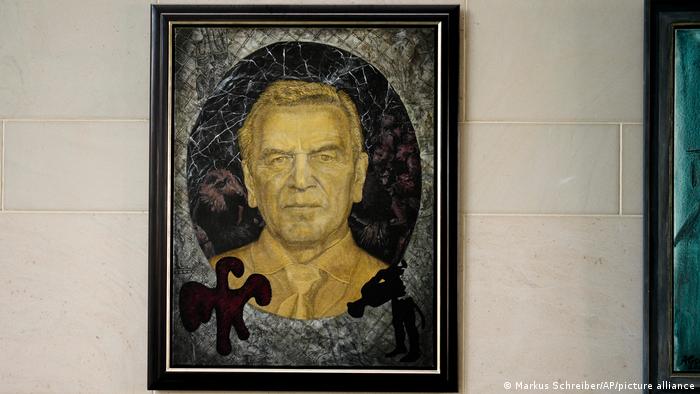 A portrait of former German Chancellor Gerhard Schröder in the 'Chancellors Gallery' at the chancellery in Berlin, which Schröder is suing now to gain back privileges lost after Russia invaded Ukraine

Former German Chancellor Gerhard Schröder sued the German parliament, the Bundestag, Friday for taking away some of his state privileges in May.

Schröder filed a lawsuit at the Berlin Administrative Court demanding back his parliamentary office, his lawyer Michael Nagel told the news agency.

The Bundestag had closed Schröder's publicly funded office and reallocated his staff after his refusal to condemn Russian leader Vladimir Putin for invading Ukraine.

It is customary for German chancellors to receive a state-funded office and staff to continue their political work after they have stepped down or retired.

While pensions of chancellors and presidents are regulated by law, other provisions for them fall under the Bundestag budget.

Decision to cut some of Schröder's privileges

Several employees have also resigned from their posts at Schröder's office since the invasion.

"The budgetary committee observes that former Chancellor Schröder no longer carries out any duties that result from his former office," the parties' joint motion read.

The parties' motion argued that the "endowment for former federal chancellors should in the future no longer be status-related, but should be based on the continuing the obligations arising from their office."

However, the decision to revoke Schröder's privileges has ignited a debate within Germany, with some arguing that other politicians, like former Chancellor Angela Merkel, had bigger staff and continued receiving benefits even though Merkel no longer actively worked for the country.

Schröder under fire for friendship with Putin

The 78-year-old former chancellor was the last SPD leader before Scholz, having led the party from 1998 until 2004. But after his party lost the 2005 election, Schröder took on jobs with Russian energy giants and developed a personal relationship with Putin.

The once popular leader has continued maintaining close ties to President Putin,  falsely absolving the Russian president and laying the entire blame for the atrocities in Ukraine on Moscow's military commanders.

In July, Schröder met with Putin and said Moscow was ready for a "negotiated solution" to the war in Ukraine. The comments were labeled as "disgusting" by Ukrainian President Volodymyr Zelenskyy.

Even though the SPD has tried to persuade Schröder to give up the relathionship, the party maintains that Schröder's ties didn't amount to a violation of the party rules and he could not be expelled.