European Commission (EC) President Jean-Claude Juncker has set out five "avenues of unity" after years of political crisis in Europe. He called on EU states to write a new history "chapter" once Britain leaves the bloc.

Presenting five options to the European Parliament on Wednesday, Juncker said it was time for European Union members to once again become "pioneers" to carve out a new future for the EU at 27, referring to the bloc's 27 remaining members after the UK withdraws.

His speech comes just weeks before British Prime Minister Theresa May is due to trigger Article 50 of the Lisbon Treaty, to begin the country's official divorce proceedings from the EU.

The former Luxembourg prime minister insisted that "as painful as Brexit will be, it will not stop the EU as it moves to the future."

Juncker laid out five "pathways to unity" for EU leaders to consider at a special summit in Rome on March 25 to mark the 60th anniversary of the bloc's founding treaty. 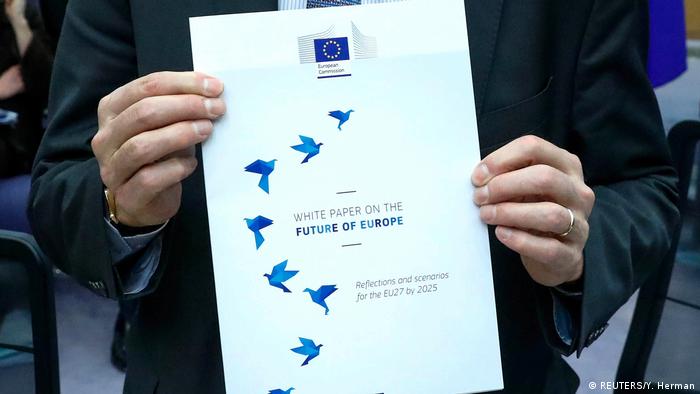 They range from reducing the EU to just a single market, to creating a "multi-speed" Europe in which like-minded countries can push on with plans even when others disagree.

The head of the EU's executive commission, Jean-Claude Juncker, has suggested a dramatic restructuring of the bloc with "core" members and "orbit" nations. These outliers could include the UK and Turkey, he said. (24.02.2017)

Lord Newby on Brexit: 'We have nothing to lose'

Is there anything that can still be done to prevent Brexit? Yes, Lord Richard Newby, a passionate pro-European, tells DW, as the Brexit bill is debated in the House of Lords. (20.02.2017)

European Commission President Jean-Claude Juncker has warned the UK it cannot negotiate bilateral trade deals in the period before it leaves the EU. London, meanwhile, is eyeing up China with talk of a 'golden era.' (17.02.2017)

In the three months following the UK's EU referendum, hate crime sky-rocketed in parts of Britain. For one British-German family in Leipzig, their future remains uncertain on both sides of the English Channel. (15.02.2017)

With the Brexit bill debate under way, UK PM Theresa May has warned parliament against delaying Brexit talks. In an unusual move, May also attended the House of Lords, where she sat on the steps of the queen's throne. (20.02.2017)

Another option would see Brussels pull back from many areas, including regional development, health, employment and social policy. Alternatively, the bloc could maintain the status quo, Juncker said, with limited progress on strengthening the euro single currency and limited defense cooperation.

The fifth option would involve a more federalist approach, "sharing more power, resources and decision-making across the board."

During his speech, Juncker hit out at "permanent Brussels bashing" by populist politicians all over the bloc, insisting that the EU was not responsible for each country's problems.

But he conceded that Brussels had often been put on a pedestal, and had failed to keep many of its ambitious promises, for example, addressing the bloc's high unemployment rate.

Looking to the future, Juncker said: "Our task will be to say clearly what Europe can and cannot do."

He called for EU states to respond to his suggestions by the end of the year, and decide on a course of action by the European Parliament elections in June 2019.

While Juncker was preparing for the imminent Brexit trigger, British Prime Minister Theresa May was facing her first parliamentary defeat on legislation which allows her to begin EU exit talks following last year's referendum.

The upper House of Lords was expected to back an amendment to protect the rights of EU citizens residing in Britain, in a vote late on Wednesday.

The amendment, brought by the main opposition Labour party, calls on the government to guarantee that EU citizens will keep and continue to acquire residency rights once formal Brexit negotiations begin.

By leaving the EU, Britain will be withdrawing from the bloc's policy of free movement of citizens among member states. That leaves three million EU nationals in Britain, and one million Britons living in other member countries, in limbo.

If the amendment is approved, the legislation will have to go back to Britain's lower House of Commons for a second vote.

The delay could potentially threaten the government's timetable for starting Brexit talks with Brussels, analysts say.

The bill had been expected to be passed on March 7, allowing May to trigger Article 50 of the EU's Lisbon Treaty, which sets the rules for a nation negotiating its exit from the EU, by the end of March.