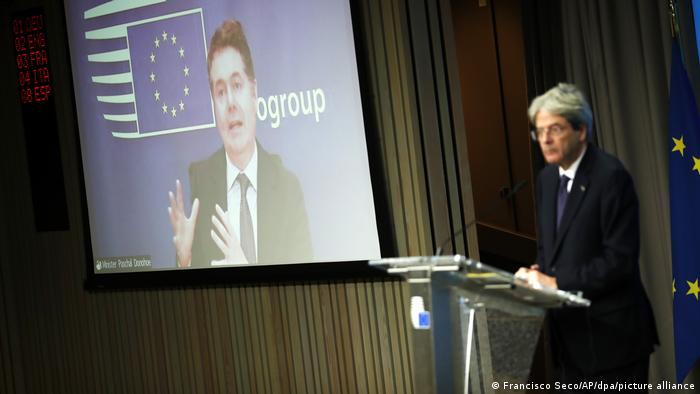 Eurozone finance ministers on Monday agreed to move forward with a long-awaited overhaul of their European Stability Mechanism (ESM) bailout fund, giving it a bigger role in crisis prevention and strengthening the single currency area in the face of the coronavirus pandemic.

"Since the onset of the pandemic, our group has shown our determination to tackle the economic challenges head-on," said Eurogroup president Paschal Donohoe shortly after the deal was struck.

Ministers from the 19 countries that share the euro currency gave the green light for the ratification of the deal, almost a year since their agreement "in principle" to widen the responsibilities of the ESM.

"The ESM reform strengthens the euro and the entire European banking sector because we are making the eurozone even more robust against attacks by speculators," said German Finance Minister Olaf Scholz.

"With this, we are making Europe's banks more crisis-proof and supporting the real economy," he added.

The ESM was set up to bail out eurozone countries under extreme financial difficulty or that require the recapitalization of banks and have been locked out of the bonds market. The bailout came with strict reform commitments.

The changes agreed on Monday should ease access to lending with precautionary credit lines from the ESM, and also allow that institution to serve as a financial safety net for the Single Resolution Fund (SRF), which helps ailing banks.

The new measures will also reduce the risk of investors holding out for a better deal in a sovereign debt restructuring and give the bailout fund room to mediate between the sovereign and investors.

Read more: ESM, Coronabonds or 'Marshall Plan:' How the EU could manage the Coronavirus fallout

They will also allow the ESM to lend to the eurozone's bank resolution fund to wind down failing banks if, in a banking crisis, the fund runs out of its own money.

Initially, progress on the ESM reform had been slow due to the disagreements between the fiscally conservative northern countries, and the southern states which were worst hit by the COVID-19 crisis.

The ESM is seen as politically toxic in Italy where the main ruling party, the populist Five Star Movement (M5S), considers it to be a tool through which the European Union can impose austerity measures.

However, Italian Finance Minister Roberto Gualtieri indicated that Rome was satisfied with the deal.

Eurozone governments are expected to sign the ESM treaty changes in January. The amended treaty will enter into force in 2022.

Coronavirus: EU says economy will only bounce back in 2023

The EU's economy grew faster than expected during the summer despite the shock of the coronavirus pandemic. With the second wave hitting Europe, however, the bloc's leaders say there will be no V-shaped recovery.

The EU has been criticized for its response to the COVID-19 crisis. In recent weeks, the bloc has been scrambling to come up with clear financial plans, but despite huge figures being mentioned, uncertainty remains.

The Baltic states are fairly new eurozone members. But after turning their economies around following deep recessions, many think Greeks should follow their lead and tighten belts for recovery, as Girts Orests reports.