Ahead of the 2019 Eurovision Song Contest, organizers have required a promise from the Israeli government to grant visas irrespective of political affiliation. The demands clash with the country's current policies. 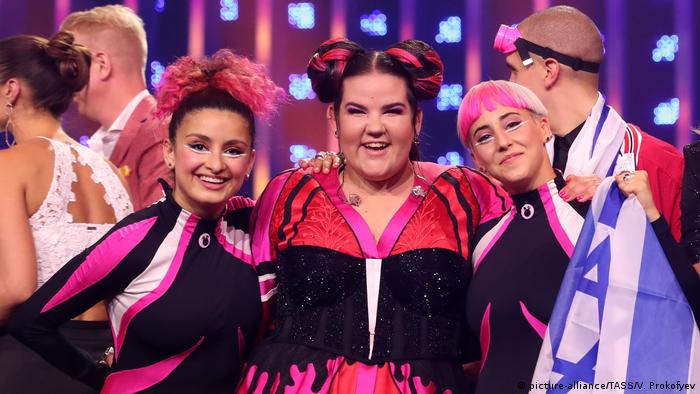 After organizers of the European Broadcasting Union (EBU) toured Israel last week to scout for possible venues for the 2019 Eurovision Song Contest — designating Jerusalem, Tel Aviv and Eilat as possibilities — the EBU director sent a letter to Prime Minister Benjamin Netanyahu with a list of demands ahead of the event, an Israeli news broadcaster reported Monday.

Among the conditions required from Israel to host the event in 2019 is that the government promises it will grant entry visas for the event regardless of participants' political opinions, religion or sexual orientation, and that they be allowed to tour the country freely.

"It's a disgrace, it's a humiliation," Public Security Minister Gilad Erdan said in an interview with Army Radio Tuesday, according to newspaper Haaretz. "Where does the European Broadcasting Union get the chutzpah to come with such demands and insist that contrary to the laws of a democratic country, people be permitted to enter Israel even if they work day and night to hurt it?"

Freedom of expression and of the press

The EBU also reportedly called for freedom of the press and freedom of expression for all participants, and demanded that Israel's public broadcaster, Kan, be given complete independence in editing the broadcasts.

The European Broadcasting Union stated that most of its demands were standard. The requirements on freedom of movement and expression, however, were added in the past to the letter to host countries including Ukraine and Azerbaijan.

One final requirement is specifically related to Jewish customs. The EBU stated that final rehearsals should be allowed on Saturday, disregarding the religious restrictions of Shabbat.

The finale of the competition traditionally falls on a Saturday evening, which would be right at the end of the Jewish Sabbath.

This demand could possibly clash with positions of the government's ultra-Orthodox coalition members. For instance, the country's deputy health minister, Yaakov Litzman, has already insisted that preparations for the contest should not interfere with the Jewish day of rest.

As a general rule, the Eurovision Song Contest is staged in the country of the previous year's winner. In 2018, Israeli singer Netta won the competition with her song "Toy."

Netta: A star is born

If ESC votes went to contestants with the strangest costumes, the winner's podium would likely look quite a bit different. The Barbara Dex Prize for the most courageous stage outfits has given credit where it's due. (07.05.2018)