Europe's newest astronaut, Matthias Maurer: 'The trainers really push you to your limit' DW: So you're the newest European astronaut, is that accurate?

Matthias Maurer: The newest. Not the youngest, unfortunately. [Laughs].

You've just "graduated." And yet there's more training to come. So have you just finished the astronaut equivalent of elementary school, high school, or do you have a bachelor's or master's degree?

A bachelor's degree. Before I can fly to space, I need mission-specific training. And that will then lead to my "master's degree."

What were three moments from your "bachelor's degree" training that will stay with you, crystal clear, for the rest of your life?

The NEEMO Mission. Living underwater, for 16 days. I lived on the bottom of the sea, and we practiced exploring Mars. That was really amazing. And it surprised me how quickly the brain adapts to the new environment … The second one was this winter survival training in Sweden. That was so tough. I had to survive two days without food, without any additional clothing. No sleeping bag, no tent. It was really cold. I had wet feet, and I was so surprised to find out how quickly you lose energy if you don't have food. And I'm lucky — I'm happy — that I actually experienced getting so close to a state of physical fatigue [as preparation for space exploration]. 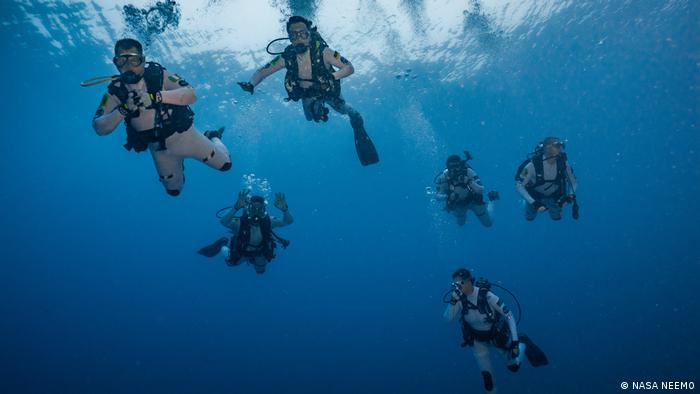 That was the part of the video we saw earlier where you had an ax in your hand, and you were chopping down a tree?

Exactly. The thought that crossed my mind was like, OK, I have no energy. But I need to chop down this tree. So be careful with the ax, [because] if I chop off my leg instead of the tree, it's the end of my astronaut career.

And the third moment?

Spacewalk training. That happened underwater as well, at NASA. We're in this heavy spacesuit, and you practice for six hours, and you learn all the different situations — what might go wrong on the outside of the station, if you need to repair it. The trainers really push you to your limit: six hours, fully concentrated. You work hard physically. Then, at the end of the six hours, there's a rescue scenario where you need to rescue your buddy and bring him in safely. And you always need to be mentally up to speed. It's completely fatiguing, mentally and physically.

When I went to university, I failed one of my courses because it was in a foreign language and it was just too much for me. And I had to go back and do it again, and then I succeeded. With all the training you did, was there a moment where you had to repeat something because you couldn't quite get it at first?

Let me tell you a secret: I really like the philosophy of how ESA astronauts get trained. If I failed an exam, it wasn't my fault, but the trainer's, because he or she didn't teach me well enough. So I tried not to end up in that situation, and we always managed. I passed my exams. Obviously, sometimes you need more training and then you get additional lessons. That's normal. I'm just human.

Waiting. Waiting for the mission assignment phase, the mission-specific training. But in the meantime, I'll work on projects. We need to prepare for the future, and the future will lead us to the moon. We need to practice how to work on the moon, how to live there. So we'll test all these different tools and equipment, and we'll set up a lunar analog [a replica of the moon's surface] here, close to the European Astronaut Centre.

How will you personally — when no one's around, putting microphones in your face — celebrate the fact that you've graduated, that you're an astronaut?

I'll probably drink a nice glass of wine with my friends.

Matthias Maurer is a European astronaut of German descent. His first spaceflight is expected by 2022, with a future mission potentially involving a trip to the moon. The 48-year-old materials scientist joined ESA in 2010 and its astronaut corps in 2015.

Germany has no protocol to follow in the event of contact with life from outer space. Research has shown that if aliens did show up on Earth, humans would actually be happy to meet them. (18.08.2018)

Sprinting star Usain Bolt ran a footrace in a Zero-G gravity plane during a flight aimed to test a bottle of champagne that can be popped in outer space. The maker of the bottle is Charles de Gaulle's great-grand nephew. (12.09.2018)