Want a peek at John Lennon's hash pipe? A lock of Elvis' hair? Maybe Dylan's harmonica? Head to the German-Dutch border town of Gronau where these objects along with other rock paraphernalia have found a new home. 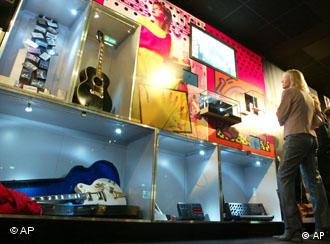 It might not seem like the birthplace of rock and roll, but the German town of Gronau is the home of Europe's first museum devoted to the genre.

Three years behind schedule, the museum finally threw open its doors on Tuesday to 500 guests, including German dinosaur rocker Udo Lindenberg, who hails from Gronau and is the reason the museum has chosen this rather out-of-the-way town for its home.

But don't be fooled, the Rock and Pop Museum could put Gronau on the map, since according to its directors, the building is meant to be "a place of musical and cross-border encounters."

Besides Lennon's drug paraphernalia and Elvis' hair, visitors can take a peek at the King's army jacket and Marlene Dietrich's gloves along with 130 other objects and more than 400 photographs and sound samples. Udo Lindenberg himself donated a shawm, a forerunner of the oboe, that he got from former GDR leader Erich Honecker.

Lindenberg insisted, however, that his home-town museum shouldn't be seen as some kind of crypt for rock-and-roll artifacts. He wants it to support young musicians and bands who sing in the German language. He also wants it to provide a little history to those young people, perhaps teaching them that rock and pop is more than bad-boy posing and sex-kitten writhing, all in search of the almighty buck.

"Young people should visit the museum to check out what was going on in the 60s and 70s," he said. "Back then music was being made to protest atomic power plants."

The €10 million museum hopes to attract some 60,000 visitors a year with its multi-media installations and sound collages, concert posters, films and specially designed sound system. Museum backers said the facility would attract music enthusiasts from around the world to little-known Gronau, right on the Dutch border.

"Now Gronau is a world city, right next to Liverpool," Lindenberg said.

Perhaps more important, it's close enough to Holland so rock fans can pop over the border for a quick taste of what John Lennon liked to smoke in that pipe on display.

English-language music dominates the airwaves in Germany. But some are calling for a radio quota that would force stations to play more German songs, saying it would help homegrown artists and the local music industry. (Dec. 9, 2003)

Much Ado About Nothing

At the air guitar championship in Berlin, contestants duke it out to see who's best a stroking imaginary instruments. The winner will represent Germany at the world championships in Finland. (July 14, 2004)