Footloose and fancy-free as a pensioner? There may be little chance of that in a future Europe. While more people are living longer, birth rates are dropping. And the eurozone crisis is contributing to the pinch. 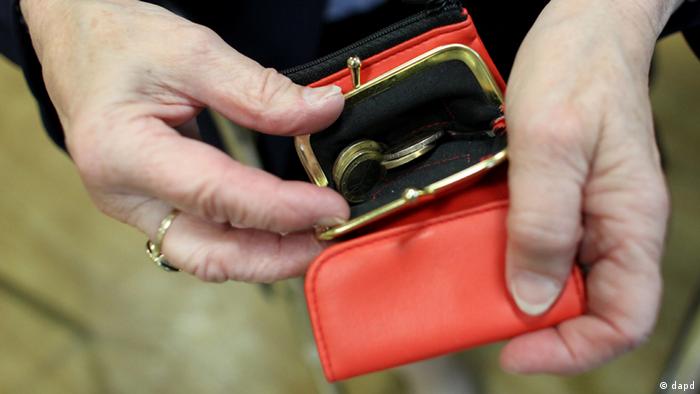 For countless people living in severe poverty or confronted with political repression in northern Africa, Europe seems to be the promised land. Thousands of them risk their lives illegally crossing the Mediterranean, hoping to reach the European continent. For them, increased discussions about the risks of the elderly in Europe facing poverty may seem rather theoretical. After all, the definition of "poor" could not be more different between a western European and someone from an African country in crisis.

Yet Europe is facing a situation that, while far removed from African circumstances, has been a great cause of concern for European Union governments for a while now.

Not only are demographic changes causing a strain on the social welfare systems as European citizens live longer and fewer babies are born, the eurozone crisis has also strapped EU governments. In many European countries, the number of people of working age is dwindling, while unemployment is rising. The consequence is that payments from both state and private pension funds are dropping. 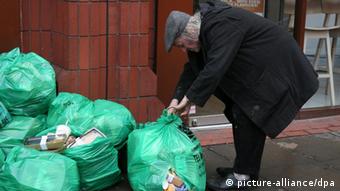 Some older people have to fight for survival

According to the European Commission, the number of people over the age of 60 is increasing by two million each year - twice as high as it was ten years ago. As it is, European Union governments spend ten percent of their gross domestic product on pensions, and that amount is set to grow. Currently, some 120 million retired people live in the EU; that's about 24 percent of the population.

Just a few years ago, the notion of a poor retiree in countries like Germany and Great Britain would have been laughable. Nowadays, not only do many people face social exclusion once they retire; they also have to fear for their existence.

"We don't have any precise data because poverty information depends on EU income surveys," Michael Dauderstädt, director of the social and political policy department of the Friedrich Ebert Stiftung, a political foundation affliated with Germany's Social Democratic Party, told Deutsche Welle. "But given the way that pensions systems are structured in most European countries, one has to assume that the risk will increase." 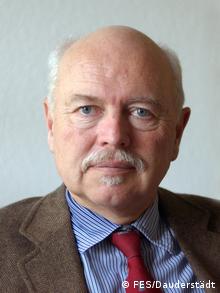 Currently, Dauderstädt said, Spain, Portugal and of course Greece have relatively high rates of poverty among the elderly. "We are talking about rates of between 20 and 27 percent," said Dauderstädt, who heads the social and political policy department at the Friedrich Ebert Foundation.

Great Britain at the tail end

According to a study by the foundation, many elderly people are also at risk in Great Britain. State pensions are relatively low there, making private pension schemes all the more important. The latter, however, are extremely vulnerable to crises on capital markets and to poor decisions made by fund managers.

The study, on the other hand, showed that the Netherlands, compared to other European countries, boasts good figures. Germany stood somewhere in the middle, with a poverty rate of nearly 15 percent in the group of over-65-year-olds. 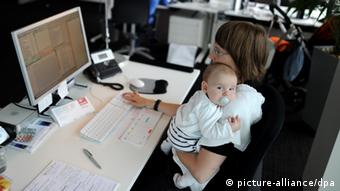 Juggling everything still may not make ends meet in old age

Women may be particularly vulnerable. The pay gap between men and women is still a reality, with women in the EU receiving an average of 17 percent less in wages than thier male counterparts. Lower wages mean reduced payments into social security funds and lower pensions. Time off for taking care of children and aging family members further reduces women's pensions.

The European Commission began responding to this problematic development last year; 2012 was declared the 'European Year for Active Aging and Solidarity between the Generations.' The Commission suggested that people retire at a later age, and women work just as long as men to help keep Europe's social welfare systems from collapsing.

In reforming their pension systems, each member state had to take into account its individual situation, said Laszlo Andor, European Commissioner for Employment, Social Affairs and Inclusion. "But principles remain for the entire EU," he said, such as adjusting the age of retirement to life expectancy. 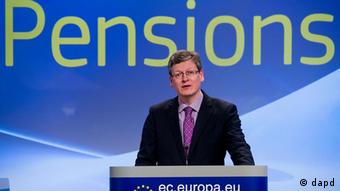 "It's important to think about income among the elderly early on, to promote employment and to ensure that more and more people make their contributions for a longer period of time in order to lay a foundation for old age," Andor said.

Within the EU, Sweden is often seen as a shining example - coupling, as it does, the age of retirement with life expectancy. Sweden has one of the highest rates of employment of people between the ages of 55 and 64.

Retirement security has certainly become more challenging due to the financial crisis, Andor said, "but we can at least suggest measures to help stabilize the situation." One Eurobarometer survey shows Europeans agree with the Commissioner, with 61 percent saying they are happy to continue working after retirement age - all long as the conditions are acceptable.

Working into old age in Germany

The number of pensioners still heading to work in their old age has doubled in the past decade. Nearly a million of Germany's 17 million retirees are still working to make ends meet. (12.12.2012)