Europe′s Biggest Station to Open in Berlin in Time for World Cup | Germany | News and in-depth reporting from Berlin and beyond | DW | 26.05.2006

Chancellor Angela Merkel is opening Europe's largest train station in Berlin Friday. The completion of Lehrter Bahnhof marks the end of a race against time for construction workers in the German capital. 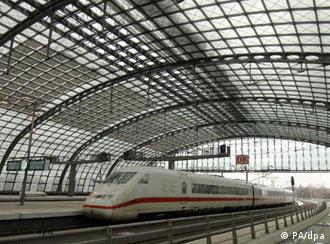 A prestige project, but is it worth it?

Dreamt up in the heady early days of German reunification, Berlin's five-storey steel and glass central railway station is finally opening after a 10 year construction period -- and just in time for the World Cup.

Some 1,100 trains and 30,000 passengers will pass through the station every day once business begins on Sunday, and it will be where most visitors disembark upon arriving in Berlin. They're likely to be pretty impressed.

According to newspaper Stuttgarter Nachrichten, "it looks like a giant glass spaceship has landed in the middle of Berlin," while Deutsche Bahn's CEO Hartmut Mehdorn has called it "the most beautiful station in the world."

It certainly is the continent's largest -- and costing some 700 million euros ($892 million) to build, it's probably its most expensive, too.

But after watching the project develop slowly and often spectacularly over the last few years, the bankrupt German capital doesn't seem to be holding the cost against anyone. Half a million people are expected to attend the two-day party marking the grand opening, which will start when Chancellor Angela Merkel rides in on the fastest train from Leipzig ever.

Other highlights of Deutsche Bahn's inauguration bonanza include concerts, fireworks, a light-show and two illuminated trains arriving from the East and the West. And then at 5:27am Sunday, the Intercity Express to Hamburg will become the first high-speed train to pull into Lehrter Bahnhof rather than Zoologischer Garten, which has served as the reunified city's central station for the last 16 years. 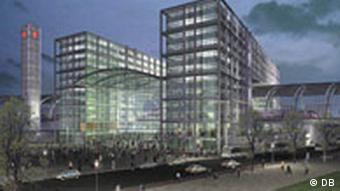 Lehrter Bahnhof is the first major European rail station built from scratch in nearly a century.

"We're the envy of major cities across the world!" said Deutsche Bahn CEO Hartmut Mehdorn. "Berlin's division during the Cold War left us with a massive strip of undeveloped territory along the former Berlin Wall. We were lucky to be able to build Europe’s biggest rail crossing hub right here in the center. It's a building for the next century. It's going to get us up to speed in many different ways."

It's a spectacular sight. Close to the historical Reichstag and the Chancellery, the station's twin towers and translucent tubular roof made up of 9,117 glass panels rise up above the rest of the capital's government quarter, cementing post-reunification Berlin's reputation for ambitious architecture.

12 meters above street level, six east-west bound tracks will connect destinations such as Paris and Moscow. 43 round glass-elevators, 54 escalators and dozens of staircases take travelers down to a three-level shopping plaza, where 82 stores, lounges and restaurants will be providing service around the clock seven days a week.

German architect Meinhard von Gerkan calls his new station a "mobility cathedral" and said his biggest challenge was bringing daylight to all levels.

"My aim was to allow daylight to shine right down to the ground floor," he said. "Transparency was everything. You might be standing at the end of a tunnel, but when the sun shines you can feel it on your face!"

On track, but only just 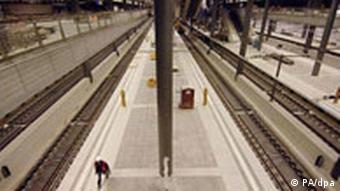 A view of the gigantic station

In fact, the project has been plagued by problems throughout development, and von Gerkan is taking Deutsche Bahn to court for altering his original plans. The architect was forced to scale down his plans for an even more ostentatious glass roof and claims the design was changed without his permission.

"It's a very expensive station and it will end up costing more than planned," said Deutsche Bahn's chief executive Hartmut Mehdorn. "We wanted a functional station…. and we had to draw the line."

Experts say that ultimately, the building might end up costing 10 billion euros if all costs -- for rail infrastructure, a road-tunnel, a subway line and even the re-routing of the Spree River which lies next to the station -- are included.

While many believe the station is both visually and conceptually over the top in the cash-strapped capital, others are even wondering what the practical advantages actually are -- with the population in western Berlin feeling particularly marginalized by the location of Berlin's new "central" station. One protest group managed to collect 112 000 signatures for a petition against the project.

But no matter what the critics say, Colin Hall of the European Union's community of railways and infrastructure companies in Brussels says Berlin's new station is more than an eye-catcher.

"Deutsche Bahn has every right, I think, to be proud of their new central station," he said. "And to me, it's a statement of confidence in the rail system."

As the world's eyes turn to Berlin for the World Cup, Deutsche Bahn hopes the new station will showcase Germany's best in technology, engineering, infrastructure, efficiency and architecture -- and get people to the matches on time.

As Berlin continues to wrangle with monuments of its inglorious past, one last big post-unification project is almost finished: Europe's largest train station. (May 24, 2006)

Derailing an Icon of West Berlin

German Rail has announced that starting next May, long-distance trains will no longer stop at Berlin's Zoo Station, once West Berlin's primary train terminal. It marks the end of an era for many Berliners. (July 14, 2005)

Star architect Meinhard von Gerkan has left his stamp all over Germany, but as he celebrated his 70th birthday on Jan. 3, he was most feted for his work as the architect of modern China. (Jan. 3, 2005)