European toilets a mystery to many refugees | Germany| News and in-depth reporting from Berlin and beyond | DW | 16.02.2016

European toilets a mystery to many refugees

Refugees often find European toilets mystifying. Pictograms and instructions in Arabic don't always have the desired effect - but help is on the way in the form of a novel kind of toilet for all. 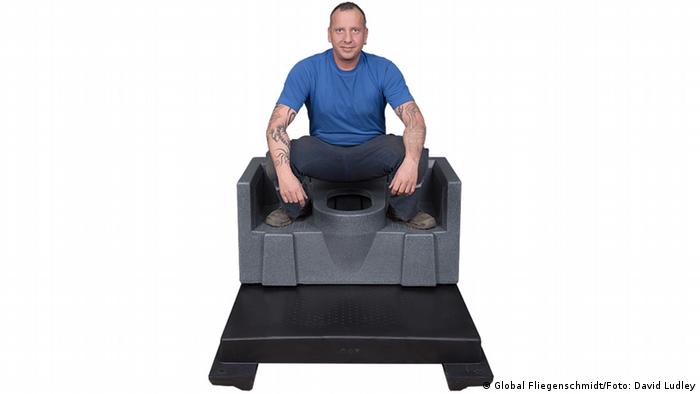 The influx of more than 1 million refugees last year is German society's "rendezvous with globalization," according to Finance Minister Wolfgang Schäuble.

It's undoubtedly a rendezvous of different cultures. And in the rush to provide housing, cots, clothing, food, language training and health care for the thousands of newcomers, no one thought to explain Western-style flush toilets.

The mayor of Hardheim, a small town in the southwestern state of Baden-Württemberg, raised the issue in October - and was ridiculed for thinking it necessary to admonish the town's asylum-seekers not to relieve themselves in gardens, parks, behind hedges and behind bushes.

The difficult and often tense situation in overcrowded emergency refugee shelters, tents and gyms isn't made easier by different toilet standards and rituals.

Squat toilets are traditional in many parts of the Muslim world. Baffled by ordinary Western-style flush toilets, refugees nationwide have squatted on toilet rims or the floor of the bathroom when nature called; others have relieved themselves in the shower stalls, leaving behind human excrement on the floors.

It's not a central problem, says Manfred Nowak of Arbeiterwohlfahrt (AWO), a social welfare organization in Berlin that currently looks after 4,000 refugees in six initial reception facilities in the capital. But it does exist, he told DW, adding that the severity of the problem depended on where the refugees were from. 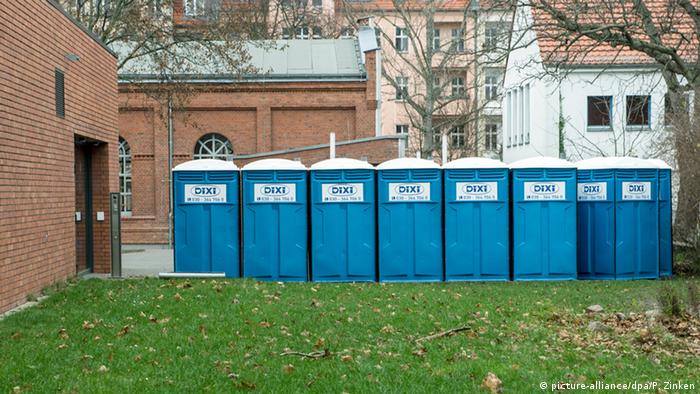 Many refugees find themselves confronted with outside portable toilets

Many migrants will have never seen toilet paper before, and even if they have, water-free wiping is widely thought to be an unsanitary way of cleaning oneself. Sit-down flush toilets are a mystery despite the pictogram instructions that have meanwhile been put up.

A remedy is in the works, however: Sanitary specialists at the Global Fliegenschmidt toilet manufacturers in Coswig in the eastern state of Saxony-Anhalt have come up with a portable "multicultural toilet."

It's been on the market for just a few days, company head Peter Fliegenschmidt told DW. His company has sold squat toilet units for years, he said, but in the wake of the refugee crisis in Germany, the challenge was to come up with a combined Western-style/squat toilet. He has already received queries from organizations that run refugee shelters.

His firm specializes in portable toilets, which are currently in high demand for use in emergency refugee shelters. "Generally, about 60 percent of our toilets are found on construction sites, and about 30 percent are used at special events like fairs and concerts," he said. Equipping refugee shelters is a new development that's bound to be "temporary," he said, adding that he saw a market for the new portable squat toilet abroad and at construction sites, which often employ foreigners.

Fliegenschmidt's design is actually surprisingly simple. It's a regular Western-style toilet bowl with a sizeable squatting platform to the left and the right.

Islamic countries traditionally use water to wash. The myreligionislam.com website lists 20 rules and practices "to be followed when answering the call of nature." One rule stipulates using fingers to clean oneself, and "if there are still traces," washing them with water. Cleaning the private parts "with stones and similar materials" is regarded as an "acceptable substitute for cleaning them with water."

Other rules forbid talking, singing, smoking or reading the paper while on the toilet. People are also advised to enter the bathroom left foot first, while exiting with the right.

Three states will vote in March. No party is currently leading. But one side is already patting itself on the back. And the others are getting increasingly nervous. That's not a good sign, DW's Marcel Fürstenau writes. (15.02.2016)

Barbara Hendricks has petitioned the government for a new budget to help integration and house migrants. As a new report painted a bleak picture for Germany's economic future, her success remained uncertain. (12.02.2016)

Rules and instructions on the Internet explaining life in Germany aim to help refugees find their feet. Most are friendly, but the guidelines posted by the mayor of one small town come across as very heavy-handed. (12.10.2015)