Dozens of companies are threatening to stop using Brazilian produce amid concerns that the proposed law could accelerate deforestation. 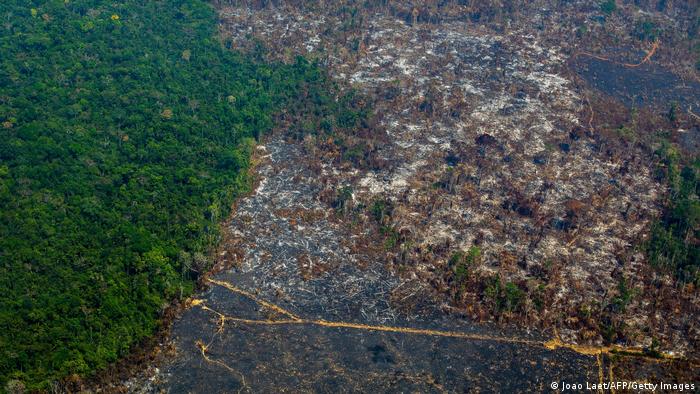 A group of European companies on Wednesday called on the Brazilian Congress to drop a proposed law seen as encouraging deforestation of the Amazon.

Should it or similar legislation pass, "we will have no choice but to reconsider our support and use of the Brazilian agricultural commodity supply chain," the 36 companies wrote in an open letter.

The legislature had withdrawn a similar plan last year following threats of boycott from several companies, including some of the signatories of Wednesday's letter.

What did the companies say?

The group of retailers and investors said Brazil's efforts to protect the environment were "increasingly inadequate," with the controversial bill potentially posing greater threats to the Amazon.

"Our door remains open to work with Brazilian partners on supporting the development of sustainable land management and agriculture," the letter read.

"We are willing partners to enable this in a way that supports economic development whilst upholding the rights of Indigenous Peoples and traditional communities."

The signatories included retail giants such as the German supermarkets Aldi and Lidl as well as the UK's Tesco and Sainsbury's.

What is the controversial proposed law?

The bill is an expansion of a 2009 law that granted land rights to so-called "land-grabbers" living in the Amazon rainforest.

Critics of the proposed legislation have warned that it would undermine anti-deforestation efforts by rewarding squatters in the Amazon.

On the other hand, proponents argue that the bill could force such properties to comply with deforestation laws by bringing the settlers into the legal system.

Land-grabbers in the rainforest — who occupy properties illegally — typically cut down areas for agricultural use.

Wednesday's letter also pointed that the plan was "counter to the narrative and rhetoric" that Brazil's President Jair Bolsonaro showed at a recent summit with US President Joe Biden.

During the meeting, Bolsonaro vowed to increase the budget for environmental enforcement and end illegal deforestation by 2030.

However, environmentalists are skeptical. The far-right leader has a record of weakening environmental regulations, including measures to counteract illegal logging that previous administrations had put in place.

Bolsonaro has also repeatedly pledged to increase agricultural activity in the region.