As a heat wave continues to scorch parts of Western Europe, a wildfire has broken out in northeastern Spain and France measured its highest-ever June temperature. The heat is expected to continue into the weekend. 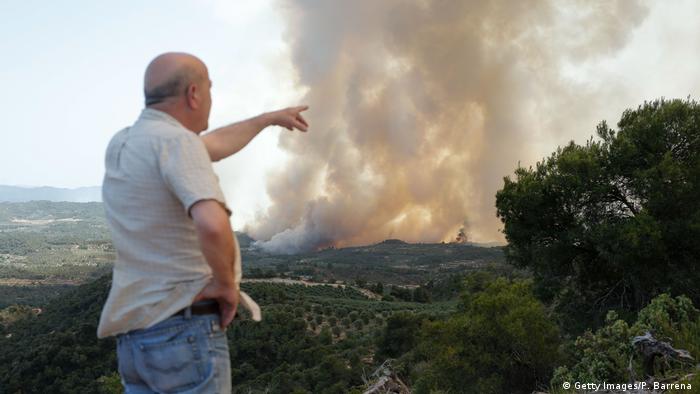 Hundreds of firefighters are struggling to contain a wildfire that continues to spread over heavily forested hills in the northeastern Spanish region of Catalonia. Firefighters said Thursday that the blaze was not under control.

"We're at a moment when the blaze is getting bigger," Miquel Buch, the regional interior minister, told local media.

At least 4,000 hectares (10,000 acres) have burned so far, and around 50 people have been evacuated. The regional government estimated that the fire could expand to 20,000 hectares. 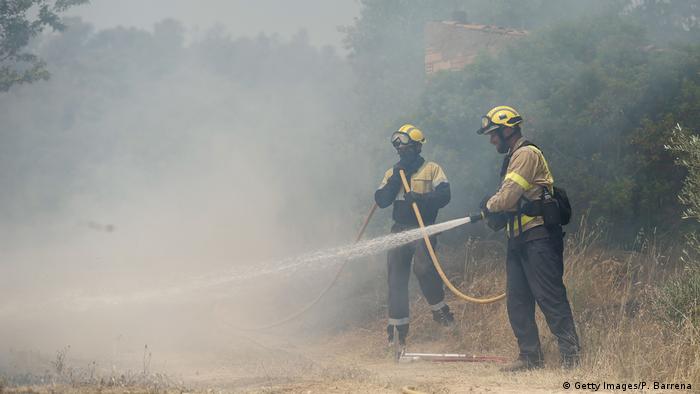 Buch said what is estimated to be the worst wildfire to hit the region in 20 years could have been sparked by improperly stored chicken manure that combusted in extreme temperatures at a farm in the village of Torre de l'Espanyol.

"It's complicated. We won't get it stabilized today," regional firefighting chief Manuel Pardo told Spanish public television. There have been no reports of any casualties from the fire.

On Thursday, France's weather service, Meteo France, said it recorded the country's highest-ever temperature for the month of June, at 42 degrees Celsius (107.6 Fahrenheit) in Grospierres, a village in the country's southeast.

The highest temperature ever recorded in France was 44.1 degrees Celsius (111.4 Fahrenheit), which was measured in southern France during a 2003 heat wave that killed thousands of people.

Meteo France said temperatures in parts of southern France could climb to between 42 and 45 degrees Celsius on Friday.

France's weather service said Thursday four administrative regions in the country's south had been placed on red alert, with outdoor sports events and festivals to be postponed. Parents would be allowed to keep their children home from school.

The red alert is the first issued by French authorities for a dangerous heat wave, affecting the cities of Marseille, Nimes, Montpellier and Avignon.

"This heat wave is unprecedented in France. It is exceptional in its intensity," French Health Minister Agnes Buzyn said.

French authorities extended restrictions on vehicles, already imposed in Paris and Lyon, to Marseille and Strasbourg in an effort to curb air pollution.

Parts of Spain and Italy are also expected to top 40 degrees on Friday. The Italian Health Ministry said Thursday that seven cities, including Florence, Rome and Turin, were at Italy's highest heat warning level. On Friday, 16 cities in Italy will be under heat alerts.

Meteorologists blame a weather pattern that is funneling hot air from the Sahara northward for scorching temperatures so early in the European summer.

Germany on Thursday enjoyed a reprieve from the extreme heat after record-breaking temperatures were recorded in parts of the country earlier in the week. However, the mercury is expected to climb to over 40 degrees Celsius in central Germany over the weekend.