An intense heat wave in Germany has pushed the temperatures soaring to a record 38.6 degrees Celsius on Wednesday. Authorities placed a speed limit on highways, as fire brigades prepare to deal with possible accidents. 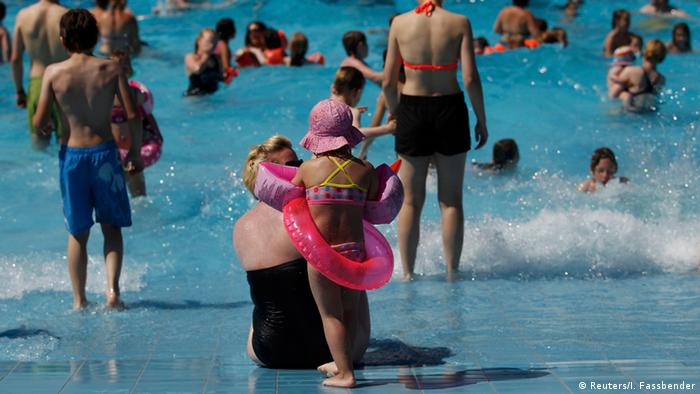 Temperatures hit 38.6 degrees Celsius (101.5 degrees Fahrenheit) on Wednesday in Coschen, Germany, near the Polish border, setting a new German high for the month of June as a searing heat wave sweeps across Central Europe.

Belgium, France and Germany have been experiencing high temperatures for the past few days.

On Tuesday, the mercury topped 36 degrees Celsius in areas like the Upper Rhine region, which includes parts of Baden-Württemberg, Rhineland-Palatinate and Hesse.

Wednesday was even hotter, especially in the Rhine-Main area of western and central Germany. Meteorologist Sabine Krüger from the German Weather Service (DWD) said the temperatures "will reach 39C and, in some places, even the 40C mark could be cracked."

In Germany, the previous hottest temperature on record on a June day was 38.5 degrees Celsius in Bühlertal in Baden-Württemberg in 1947.

Kitzingen in the southern state of Bavaria recorded 40.3 degrees Celsius — the highest ever in Germany — on both July 5 and August 7, 2015. Experts say it is possible that temperatures could be even higher this year.

Meteorologists say the extremely hot weather in June is due to warm air moving from Africa to Central Europe. It is likely to last until the end of the week.

German authorities have urged people to take necessary measures to avoid heat stroke, as temperatures above 37C could cause exhaustion or even cardiac failure. Experts say that elderly people, babies, and sick people are particularly at risk.

Temporary speed limits have been imposed on several autobahns as a result of the heat. Authorities fear that the temperatures could suddenly cause the asphalt to warp or break up.

In the eastern state of Brandenburg, police shared images of a man riding his moped in the nude (albeit wearing his helmet) when he was stopped by officers. Police quoted him as responding, "It's pretty warm after all, isn't it?" when challenged.

Swimming pools in Germany have seen an increased number of visitors as the heat wave intensified in the country. But in Reiskirchen-Ettingshausen in Germany's west, a mistake with the chlorine concentration at an outside pool led to at least 38 bathers suffering respiratory problems and skin irritation.

Heat waves on the rise

Scientists say heat waves of this magnitude are on the increase in Europe, further evidence that the Earth's climate is changing.

Stefan Rahmstorf of the Potsdam Institute for Climate Impact Research said, "Monthly heat records all over the globe occur five times as often today as they would in a stable climate."