Europe agrees on how to cobble together 700-billion euro safety net | Europe| News and current affairs from around the continent | DW | 22.03.2011

Germany will contribute over one quarter of the European Union's new permanent fund set aside to rescue floundering economies. Europe is trying to establish a long-term shield against debt-related meltdown. 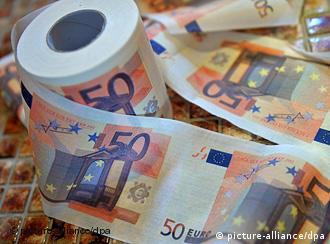 The plan should ensure that the euro maintains its value

Member states will provide 80 billion euros in hard currency and 620 billion in either "on-call capital" or state guarantees. These reserve funds would only be liquidated when required. The ESM is meant to be able to provide half a trillion euros of emergency loans, if necessary.

"To have that effective lending capacity … experience tells us we need to allow for this kind of margin," Luxembourg Prime Minister Jean-Claude Juncker told reporters after Monday's meeting. Juncker heads the Eurogroup group of finance ministers from the 17 countries using the single European currency, the euro.

The ESM is set to replace an existing rescue fund as of January 1, 2013. The current, temporary safety net - cobbled together in haste after Greece called for international financial assistance and before Ireland followed suit – is called the European Financial Stability Facility (EFSF), and has already been used to aid the government in Dublin.

European politicians are also seeking to expand the EFSF's effective lending capacity to 500 billion euros, as it looks increasingly likely that this fund will have to come to Portugal's rescue before the new fund is available. 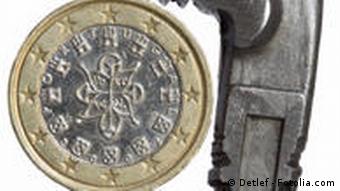 Debt-laden Portugal may need help before the ESM's arrival

As Europe's largest economy, Germany will provide the most funds to the planned ESM. Finance Minister Wolfgang Schäuble said Berlin would contribute 27.1 percent of the total - 21.68 billion in cash, and 168 billion in reserves. Schäuble said half the money would be provided before 2013, with the remainder paid in annual installments.

Individual contributions will generally be determined according to the size of each country's economy, but EU economy commissioner Olli Rehn said that countries whose per capita income is below 75 percent of the EU average will receive a discount.

This provision will apply to most Central and Eastern European members of the bloc, and may be a concession aimed at Slovakia, whose conservative government last year objected to loaning money to bankrupt Greece - a country with a higher per capita income than Slovakia.

Monday's agreements are likely to be endorsed by an EU summit on Thursday and Friday, but there are several other European and domestic hurdles to jump before ESM planning can begin in earnest.

"We invite the national parliaments to endorse this overall amount… so that in every circumstance, the ESM will have at its disposal the necessary amount of funding," Olli Rehn said.

As with the existing European safety net, any ESM loans would require the parallel participation of the International Monetary Fund.

The European Union president has announced that the effective lending capacity of the eurozone's debt rescue fund will be bolstered, saying this measure would allow the bloc 'to finally turn the corner.' (12.03.2011)

Speculations on Portugal's financial standing have shot up borrowing rates for the country to unsustainable levels. But determined to avoid a bailout, the government presses on with austerity. (11.03.2011)

Conservative leaders from the EU have met in Finland, aiming to head into a eurozone summit next week with a unified stance. Chancellor Merkel has been pushing her plan to punish states that live above their means. (05.03.2011)