To add insult to England's injury of losing the final, a number of Black England players have been subjected to racial slurs. Condemnation has been swift, but will it lead anywhere? 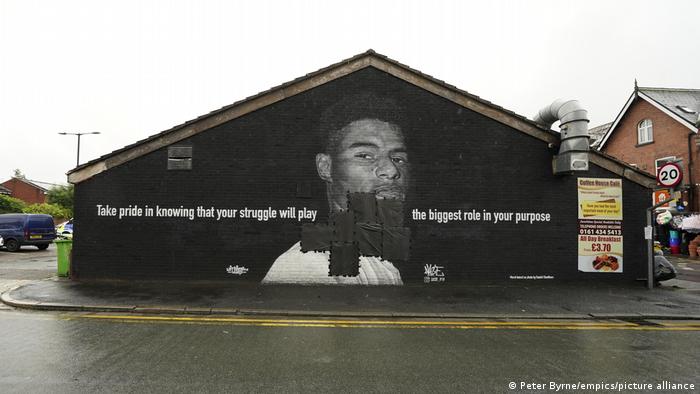 One of the lasting and most compelling images of the Euro 2020 was that of England players taking the knee before their games to highlight racial inequality and discrimination.

Those efforts were undone in the early hours of Monday morning.

As if losing the Euro 2020 final to Italy wasn't bad enough for most English fans, the country woke up to the news of online racist abuse leveled at the Black players Marcus Rashford, Jadon Sancho and Bukayo Saka, who missed their penalties.

Condemnation was swift and strong across the board. The Football Association (FA) issued a statement shortly after the game denouncing the incidents.

"The FA strongly condemns all forms of discrimination and is appalled by the online racism that has been aimed at some of our England players on social media," the statement said.

"We could not be clearer that anyone behind such disgusting behavior is not welcome in following the team. We will do all we can to support the players affected while urging the toughest punishments possible for anyone responsible."

A Metropolitan Police tweet said: "We are aware of a number of offensive and racist social media comments being directed towards footballers following the #Euro2020 final. This abuse is totally unacceptable, it will not be tolerated, and it will be investigated."

Police in Greater Manchester were called to investigate reports of a defaced mural of Rashford in the Manchester suburb of Withington.

A Twitter spokesman said on Monday that the platform had removed over 1,000 abusive posts and permanently suspended a number of accounts.

Racism in football is, unfortunately, a ubiquitous phenomenon, and Black players are targeted around the world, whether in amateur or professional leagues.

In one of England's Euro 2020 qualifiers, some of England's Black players were subjected to racist abuse by a section of Bulgaria fans.

The sounds of monkey chants and images of fans performing Nazi salutes were broadcast around the world. At the time, many observers hoped that the incident would be a pivotal wake-up call in football's ongoing fight against racism. However, the response by UEFA, Europe's governing football body, was seen as lackluster at best. It handed out a fine of €85,000 ($101,000) and banned fans from attending the next match. Given that Bulgaria was in the midst of another ban for a similar incident, many observers questioned UEFA's handling of the matter.

England is often referred to as the birthplace of football — a game that is supposed to have a unifying impact on all walks of society. So why is it such a problem in England?

"Despite the liberalizing of English (and British) society that started in the 1960s, there remains, arguably, an atmosphere of spiteful aggression within a significant sociocultural constituency. Pre-social media, the tabloids tended to pander to this, and now social media provides a perfect conduit for its expression. In the last 50 years at least, football fandom has been tainted by this mentality," Paul Davis, senior lecturer in the sociology of sport at the University of Sunderland, told DW via email.

Although more and more footballers are speaking out against racism and describing the impact it has on their professional and personal lives, they are not always being heard. Chris Grant, a board member of Sport England, a non-departmental public body under the UK's Department for Culture, Media and Sport that tackles inequalities in sport, has noted that the "systemic" nature of racism across society and politics fuels racism in sport.

The FA has launched a myriad of campaigns to combat racism. Much of it, you could argue, has been too little, too late. Davis says there's only so much it can do.

"I think the FA are doing a lot, and it is not clear what more they can do. In the end, it is about changing the hearts and minds of some people. If people, for whatever reasons, enjoy othering, abusing and spiting others, the FA have a hard job trying to change that," he said.

Some might argue that the negative reactions to a gesture like taking the knee — the argument being that it's a political statement that has no place in sports — inevitably nullify other attempts by politicians to crack down on racism. Davis says that's not the case.

"That effect is not inevitable. Taking the knee is a precise practice with a precise background. The naysayers have their reasons for rejection of the practice. There are different reasons, and it might be that some or all of them are questionable. However, the controversy around taking the knee does not entail that other anti-racism initiatives in sport and elsewhere are doomed," he said.