Though penalties cost England again, those who missed can hold their heads high. But some of their achievements are tarnished by the violent, brainless actions of a few 'fans', writes DW's Matt Pearson from Wembley. 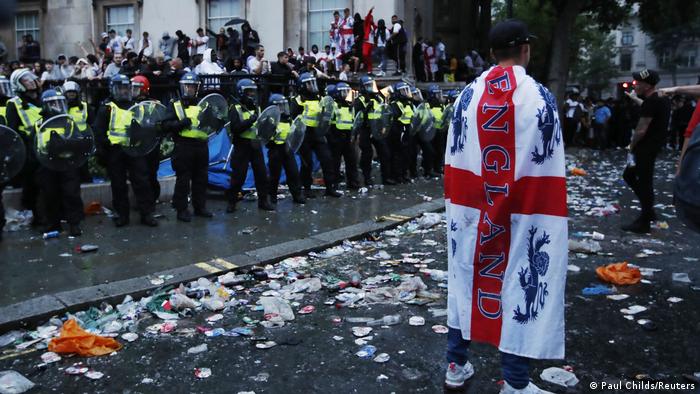 Chaotic scenes filled the streets on the day of the final

As Gianluigi Donnarumma pushed away Bukayo Saka's penalty just a few meters in front of me, my first thought was unprintable. The second was to curse the existence of penalties. After those familar emotions, an even more depressing one; it's going to be carnage outside this stadium.

Sure enough, it was. On a 15-minute walk to the bus stop, I saw a man attacked and left lying in the road, a teenage girl struck by a police horse galloping down the pavement and a man's car window smashed as he sat in gridlocked traffic.

Outside of a tense, edgy 120 minutes on the pitch, this was the story of the day. Wembley Way, the long straight stretch of concrete that leads from the underground station to stadium was packed for hours before the game.

But rather than enjoy the strange sensation of a final, glass bottles, cans, rucksacks, fireworks, shoes and all sorts of other missiles filled the air. There was nothing nationalistic about any of this, this was England fans hurling stuff at each other. Later some were throwing punches at each other.

A number of fans stormed the stadium, according to multiple reports, and at several turnstiles around the ground fans tried to sneak in. London's Metropolitan Police, who tweeted on Sunday that they had made 45 arrests, say a "small number" were successful in gaining entry without tickets but the stadium looked significantly fuller than it had on Wednesday against Denmark.

When the game kicked off, the snarling, nasty atmosphere from outside the stadium had thankfully not made it through the gates fully intact. Limbs were flailing in a positive way as Luke Shaw scored after just two minutes and the sense of positivity and pride that an engaged, socially concious team have offered a fractured country in the last month, was on full display.

Two hours or so later, after Saka, Jadon Sancho and Marcus Rashford had added their names to the list of England penalty misses that includes their coach Gareth Southgate, England fans clapped their players as they headed for the exits. That sense of a new bond being formed remained, despite a deserved win for Italy.

But unfortunately it is not yet powerful enough to wash away the scourge of the violent English football fan.

Worse still, within minutes of the whistle, Saka, Sancho and Rashford had all been racially abused on social media. Such abhorrent reactions are par for the course but it should never be forgotten just how damaging they are, and how pathetic and gutless the perpertrators.

Seeing your team losing a final is tough. Seeing them lose on penalties is even worse. But having to be associated with the morons who hurl bottles or racist abuse by virtue of my birth and the team I support is a different kind of sadness. No team deserve 'fans' like this. Especially not this England team.

Euro 2020: What type of England might football come home to?

England's men's team are days away from a first ever Euros final. Though Gareth Southgate's squad may seem to have the backing of a united country, it's not quite as simple as that, reports Matt Pearson from London.

Opinion: Who decides that omicron is a 'South African' variant? 9h ago