The Black England and Manchester United player has vowed to "never apologize for who I am." Top British lawmakers have also come under scrutiny for not condemning fans who booed players taking a knee against racism. 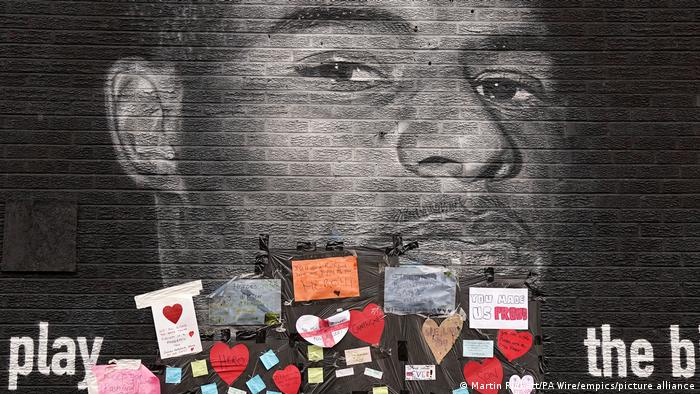 England's Marcus Rashford said he will "never apologize for who I am" in a statement released on Twitter.

Rashford made the comments late Monday after he, Jadon Sancho and Bukayo Saka were subject to a storm of online racist abuse following England's Euro 2020 final defeat to Italy, during which they missed penalties.

Rashford's statement has since been retweeted over 150,000 times.

'If I have nothing else I have that'

"I'm Marcus Rashford, 23-year-old black man from Withington and Wythenshawe, South Manchester. If I have nothing else, I have that," Rashford wrote in a statement on Twitter.

In his statement, the striker apologized for missing his penalty, saying: "It's been playing in my head over and over since I struck the ball and there's probably not a word to quite describe how it feels."

"I can take critique of my performance all day long, my penalty was not good enough, it should have gone in but I will never apologize for who I am and where I came from," Rashford added.

"Seeing the response in Withington had me on the verge of tears," Rashford said, referring to a mural honoring him in the South Manchester suburb that neighbors his hometown of Wythenshawe. It had been defaced before locals covered the hateful language with messages of support.

Earlier this year, Rashford had received national plaudits after campaigning for free school meals for children during the pandemic, forcing the UK government into a U-turn.

Did British lawmakers 'stoke the fire' of racist abuse?

Patel said she was "disgusted," adding that "vile racist abuse" had no place in the UK.

Johnson said: "This England team deserve to be lauded as heroes, not racially abused on social media."

But their response faced backlash on Monday from Rashford's England teammate Tyrone Mings.

On Twitter, Mings accused Patel of hypocrisy for not condemning fans who booed them taking the knee.

Players decided to carry out the gestures to show solidarity against racial discrimination before their matches.

The knee protest was launched by US-football quarterback Colin Kaepernick and caught on internationally in the wake of last year's Black Lives Matter protests.

At the time, Patel said taking the knee was "gesture politics" and that it was a choice for the fans whether to boo players.

Johnson also refused to criticize the fans over the issue when asked last month.

"You don't get to stoke the fire at the beginning of the tournament by labeling our anti-racism message as 'Gesture Politics' and then pretend to be disgusted when the very thing we're campaigning against, happens," Mings, who also plays for Birmingham-based Premier League side Aston Villa, posted on Twitter on Monday.

"We need to ensure that those platforms take action and if they don't, the government will take action against them," Stephen Barclay, chief secretary to the Treasury, told Sky News on Tuesday.