Euro 2020: Austria see off North Macedonia with a touch of Bundesliga class

Austria celebrated a first win at a major tournament for 31 years, seeing off North Macedonia in the only group game in Euro 2020 between two landlocked countries. The game was decided by Austria’s Germany-based talent. 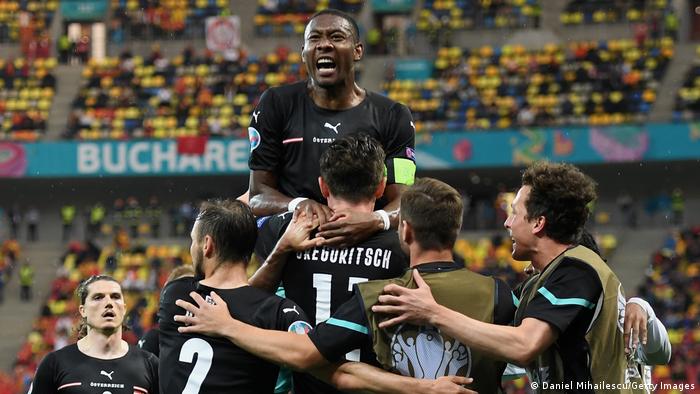 David Alaba, center, was the key architect of Austria's victory

For followers of the Bundesliga, there was a familiar feel to Austria's matchwinners against North Macedonia.

Stefan Lainer, the Borussia Mönchengladbach defender, and Michael Gregoritsch, the Augsburg striker, grabbed the key goals with Marko Arnautovic, once of Werder Bremen, making the win safe late on.  It was Austria's first in a major tournament for 31 years and, at the seventh attempt, their first ever in a European Championship.

For Austria though, this victory was more about the players pulling the strings. Austria boast a core of experienced Bundesliga players of significant quality. Marcel Sabitzer and Konrad Laimer, both of RB Leipzig, and of course David Alaba, one of Bayern Munich's star performers for the best part of a decade, were all hugely influential here. 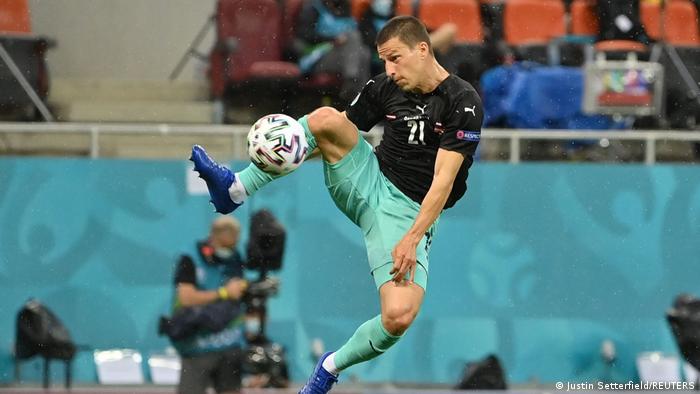 Lainer isn't a player used to scoring. He managed just two last season for Borussia Mönchengladbach and has scored the same number for Austria, in his 29 international games. Both have come against North Macedonia, scoring against the Balkan nation in the qualifying campaign for this tournament.

Lainer's finish was exemplary. A volley that flashed across Stole Dimitrievski in the North Macedonia goal from a tight angle, but the vision was all Sabitzer's. The Leipzig man's arrowed ball to Lainer was outrageous in its execution and got the finish from Lainer that it deserved.

North Macedonia struck back through their captain and veteran striker Goran Pandev to raise hopes of a repeat of their stunning win over Germany in March, but Alaba crafted another to kill off the underdogs. Cunningly creating space for himself on the left, the Austria captain whipped a teasing low ball into the box which was diverted into the net by Gregoritsch, whose goal will lift him after a difficult couple of seasons in front of goal.

Despite defeat, North Macedonia are making friends in this tournament. The result will come as a disappointment given their ambitions, but their performance was commendable and, with four points potentially enough to take teams through, everything is still on the table for the lowest ranked team in the tournament.

A little like Iceland five years ago, the team who shocked England and lit up the previous instalment of this tournament, North Macedonia – a nation of just two million people -  are punching above their weight. And like North Macedonia, Iceland also failed to win their first game in 2016. The dream is still alive