EU welcomes transfer of Mladic to UN war crimes court | Europe | News and current affairs from around the continent | DW | 01.06.2011

The EU has hailed the transfer of suspected war criminal Ratko Mladic to The Hague, where he will remain in custody until he appears before the UN war crimes tribunal to answer for his role in the 1992-95 Bosnian war. 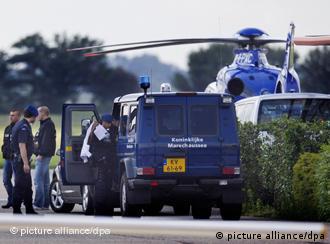 "I welcome the transfer of Ratko Mladic to the International Criminal Court for the former Yugoslavia (ICTY) in The Hague," Ashton said in a statement. "This is an important moment for reconciliation in the region and for international justice."

Mladic was flown out of Serbia on Tuesday and remanded in custody at the ICTY in The Hague to await trail on charges of genocide and war crimes for his role in the 1990s Bosnian war. Mladic has been on the run for almost 16 years.

The court said Wednesday that Mladic would be arraigned on Friday.

Ashton said a trial of Mladic would "contribute to revealing the truth and will fulfill a duty to provide justice for the victims and their families."

"It's a late but welcome victory for the victims of his crimes," he added. 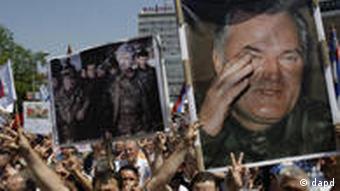 Mladic still has many supporters in Bosnia

Mladic is suspected of masterminding the 1994 massacre of about 8,000 Muslim men and boys in the town of Srebrenica during the 1992-1995 war in Bosnia. He also faces charges in connection with the 44-month siege of the Bosnian capital Sarajevo in which some 10,000 people died.

Mladic's extradition was ordered last Friday but there was a 72-hour delay for defense lawyers to make the appeal.

Before a decision was reached on his appeal, Mladic visited the grave of his daughter Ana. She is thought to have committed suicide at age 23 in 1994.

Meanwhile, thousands of demonstrators gathered in Banja Luka, Bosnia. Many of those in attendance were veterans of the Bosnian War, and pledged their support to Mladic.

Mladic was captured last week at the farmhouse of a relative after 16 years on the run. He was the most-wanted suspect by the ICTY before his arrest. The European Union made Mladic's capture one of the requirements for Serbia's potential EU accession.

Arrested Bosnian Serb war crimes suspect Ratko Mladic had nothing to do with the 1995 Srebrenica massacre, his son Darko told journalists after visiting him in the Serbian jail where he is being held. (29.05.2011)

The arrest of Ratko Mladic means a lot to the women of Srebrenica, says Sabiha Husic, head of the Medica Zenica support organization. She's worked with many of the victims of the 1995 massacre that left deep scars. (27.05.2011)

Opinion: Life sentence for 'Butcher of Bosnia' upheld, but will it change Serbia's nationalist narrative? 09.06.2021