The far-left Syriza party is set to form Greece's next government after sweeping to victory in Sunday's election. Syriza plans to renegotiate the country's international bailout, leading to fears for the eurozone. 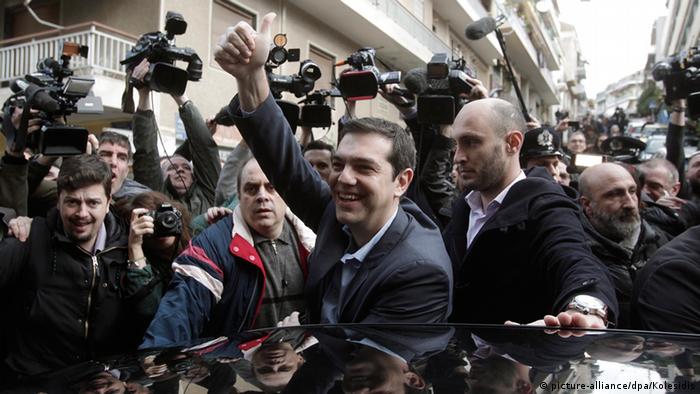 Asian stock markets haven't taken the news of Syriza's victory in Greece's general election particularly well, with the common European currency, the euro, of which Greece is a member, dropping to its lowest level against the dollar in more than a decade.

At one point in early Monday trading in Tokyo, the euro dipped to 1.1088 against the US dollar - its lowest value since September 2003.

This was hours before the European markets were to begin trading for the first time since Syriza cruised to victory at the polls on Sunday. The left-wing party fell just short of an absolute majority, meaning it will need to find a coalition partner in order to form a government.

According to results posted on the website of the Greek Interior Ministry early on Monday local time, Syriza took 36.35 percent of the vote, which converts to 149 seats in the 300-seat parliament - two short of an absolute majority. This was with more than 99 percent of the polling stations reporting.

On Sunday evening, Syriza's leader and the man set to replace Samaras as prime minister, Alexis Tsipras, delivered an exuberant victory speech to his supporters in Athens.

"Today the Greek people have made history. Hope has made history," Tsipras said, adding that Greece was "leaving behind disastrous austerity" implemented by the Samaras government in order to comply with the terms of the country's 240-billion-euro ($270 billion) bailout package.

"The verdict of our people means the troika is finished," Tsipras said, referring to the European Union, the International Monetary Fund and the European Central Bank, which have bankrolled the bailout that kept Greece from going into default over the past few years.

"The new Greek government will be ready to cooperate and negotiate for the first time with our peers a just, mutually beneficial and viable solution," Tsipras said, repeating one of the key pillars of his election platform.

Time to deliver on campaign promise

As Europeans woke up on Monday, the big question appeared to be whether Tsipras would be able to deliver on his pledge to negotiate more favorable terms on Greece's bailout, allowing it to remain part of the single currency area.

Prior to the election senior German politicians said repeatedly that whichever party took power following the vote, Greece would be expected to meet the international contractual obligations entered into by the previous administration.

German Bundesbank President Jens Weidmann made a similar statement in an interview with ARD public television on Sunday, saying he hoped "the new Greek government will not make promises it cannot keep and the country cannot afford."

British Prime Minister David Cameron voiced what must have been on a lot of Europeans' minds via his Twitter account late on Sunday, saying Syriza's victory "would increase economic uncertainty across Europe."

The first indication of Tsipras' chance of success in renegotiating the deal could come later on Monday, when European finance ministers will assemble in Brussels to discuss how best to respond to the challenge handed to them by the Greek electorate.

Greece's outgoing prime minister has conceded defeat to the left-wing Syriza party. Syriza's Alexis Tsipras has vowed to renegotiate the country's international bailout, calling for an end to "austerity and humiliation." (25.01.2015)

The European Central Bank has implemented a plan to ease the eurozone crisis by printing money and buying government bonds. Prominent figures in Germany were unimpressed, charging the bank with overstepping its bounds. (23.01.2015)

Alexis Tsipras, leader of Greece’s leftist opposition, has a good chance of winning Sunday's parliamentary elections. Voters are suffering in the economic crisis and fed up with the traditional political parties. (21.01.2015)