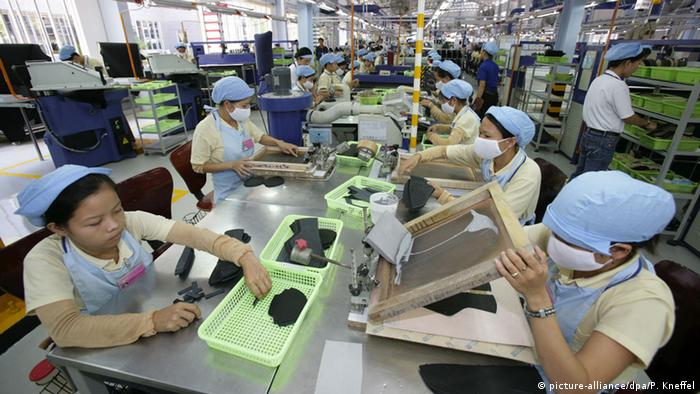 For eight years, the EU and Vietnam have been negotiating a free trade agreement that would open the developing Southeast Asian country's market to the world's largest trading bloc.

The EU-Vietnam Free-Trade Agreement (EVFTA) would abolish 99% of customs duties, eliminate bureaucratic hurdles by aligning standards for goods like cars and medicine, and ensure easier market access for both European and Vietnamese companies.

On Tuesday, the EU Parliament's International Trade Committee (INTA) will present a draft resolution of the EVFTA. If the European Parliament accepts the resolution during its plenary session in February, the EVFTA will come into force one month later.

The European Commission describes the EVFTA as the most ambitious free trade deal the EU has ever concluded with a developing country. According to the EU, the agreement could bring €15 billion ($16.6 billion) worth of additional exports annually to the EU by 2035.

Nguyen Minh Vu, the Vietnamese ambassador to Germany, said that the agreement is a positive step for the economies of Vietnam and the EU.

"In the context of trade tensions and rising protectionism, the EVFTA provides a strong signal of support from both sides for globalization and unwavering commitments to a free and rules-based trade system," he told DW.

Why does the EU want a deal?

The EU is also in the early stages of negotiating similar agreements with Thailand, Malaysia and Indonesia.

"In the long term, there could be an ASEAN-EU agreement," said Schweisshelm, adding that Vietnam is strategically important for the EU as it seeks to broaden political influence in the region, especially considering the rising influence of China. For example, the EU concluded a security partnership with Vietnam in 2019.

Ambassador Vu is also convinced that the EVFTA will significantly deepen the strategic partnership between the EU and Vietnam economically and politically.

Vietnam's export-oriented economy has relied on free trade for years. No other ASEAN country except Singapore has concluded more free trade agreements (11 in total, five more are currently being negotiated). The strategy has worked so far. According to the government, Vietnam's economy has grown by an average of 6.5% in the last five years.

Foreign direct investment has played a large part in this and the EVFTA should make Vietnam even more attractive for investors, especially from the EU.

"The EU is Vietnam's fifth biggest foreign investor. It is reasonable to hope that the figure will increase significantly," said Vu, adding that 62% of investors from the EU have a positive opinion of doing business in Vietnam.

In addition to free trade, the EVFTA requires that Vietnam to comply with the core international labor and environmental standards of the International Labor Organization (ILO).

Vietnam has already ratified six of eight ILO standards. Although freedom of assembly and the prohibition of forced labor are still missing, Vietnam's government amended the country's labor code in November 2019.

Starting in 2021, a new law will allow the creation of independent trade unions at the enterprise level that do not have to join Communist trade unions.

"It is a real taboo break for a Leninist system," said Schweisshelm, adding that at the same time, it is necessary to wait and see how the law will be implemented. Although the EU and Vietnam share some similar values on business, there are big differences on transparency and civil society.

In November 2019, 18 NGOs wrote a letter to the EU Parliament calling for the free trade agreement to be postponed until Vietnam releases all political prisoners and allows for a free press.

"To simply vote to consent, without getting anything from the Vietnamese government, is to waste an unprecedented opportunity for positive change in the country," said Human Rights Watch Brussels representative Claudio Francavilla.

Schweisshelm said NGOs in Vietnam see the agreement as a chance for more leeway, if the EU monitors progress on international labor standards.

In the past, the EU has signed free trade agreements on several occasions that also demanded labor and environmental standards, but failed to follow up on enforcement, said Schweisshelm.

For example, South Korea closed a free trade deal with the EU in 2011, but to date, only half of the deal's core labor standards have been ratified. Schweisshelm said this should not be repeated in Vietnam.

"Hopefully the EU will change its policy and say that with ratification, the work is not finished, it is just beginning," he said. 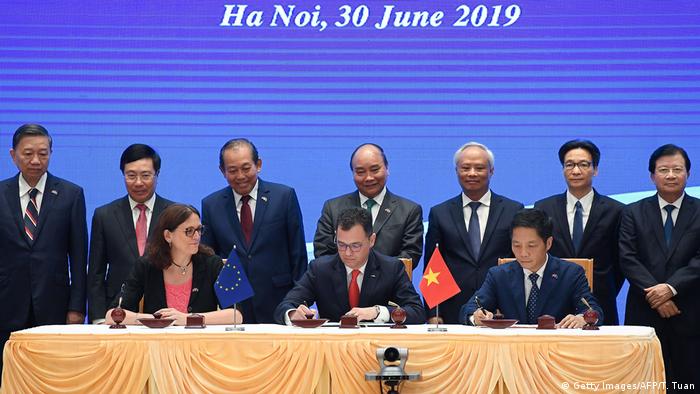 EU and Vietnamese officials sign the the EVFTA in Hanoi. It still needs to be passed by the European Parliament

One critical aspect of EVFTA is that it provides for the creation of a Domestic Advisory Group (DAG) to verify that the agreements are respected.

The DAG should include representatives of employers, employees and environmental organizations, one in Europe and one in Vietnam.

However, in terms of Vietnam, the question is who will sit in the DAG, and whether there will be independent NGOs and trade unions or just representatives of the ruling Communist Party.

So far, Vietnam has insisted that the terms "civil society" or "civil society organizations" do not appear in the draft text of the agreement.

In December 2019, the chairman of the EU trade committee, Bernd Lange, wrote to the Vietnamese Prime Minister Nguyen Xuan Phuc calling for binding written commitment from Vietnam to ratify the ILO standards.

This would include concrete measures for the admission of trade unions and a guarantee of the formation of an independent DAG before the final vote in February.

There has already been a favorable response from Vietnam, although the details are still vague. Next week, Vietnam's trade minister, Tran Tuan Anh, is expected to provide more details ahead of a meeting of Vietnam's committee on international trade.

Experts are calling on the EU to take a stance on Vietnam's rights record amid new trade talks.