After cat and dog fur were found in products sold in the European Union, the bloc moved to prohibit trade in the animals' fur as of 2009. That's too late, say animal rights activists in Germany. 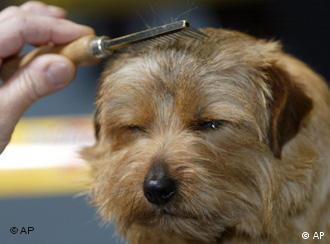 The sale and import of products containing cat or dog fur is to be banned across the European Union, officials said Monday, Nov. 26. EU agriculture ministers formally adopted a proposal to this effect put forward a year ago by the European Commission during a regular council meeting in Brussels.

The proposal, which becomes European law at the beginning of 2009, calls for a total ban on the import, export and sale of cat and dog fur in all of the EU's 27 member states.

The European Commission proposed the legislation after public outcry that fur traders were not following a voluntary prohibition and cat and dog fur was found in EU products. The new EU rule, however, does not say how the ban will be enforced. 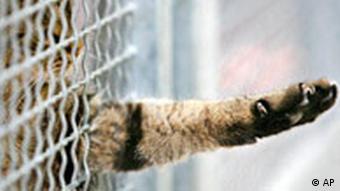 The European Parliament agreed to a similar proposal once already

At present, only 15 EU countries have some sort of legislation in place with regard to cat and dog fur. These are: Austria, Belgium, Britain, Cyprus, Denmark, France, Germany, Greece, Italy, Latvia, Luxembourg, the Netherlands, Poland, Slovenia and Spain.

The rules also differ from state to state. Some ban such pets from being reared for production purposes while others impose strict import bans.

The regulation adopted by ministers on Monday, which is expected to be re-approved by the European Parliament in December, harmonizes and strengthens these rules across the bloc.

Germany's Animal Protection Association said the ban was a step in the right direction, but criticized the union for moving too slowly on the issue. 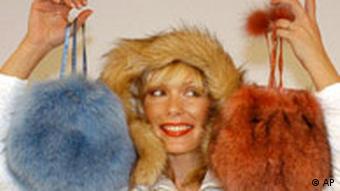 The ban does not prohibit trade in other fur products

"The period of time until the actual ban is too long -- by the end of 2008 thousands more animals will suffer excruciatingly and die," Wolfgang Apel, the association president, said in a statement. "Even though there are still individual exceptions for educational and taxidermal purposes are allowed, the decision can be called a success."

The amount of products containing cat or dog fur in EU markets is difficult to determine as the fur is usually used as a fraudulent substitute for more expensive fur or for synthetic fur substitutes, the European Commission noted.

During parliamentary debate on the issue in June, British Labour MEP Arlene McCarthy, who chairs the internal market and consumer protection committee, said many people unwittingly buy garments made with cat and dog fur due to improper labeling.

"The majority of cat and dog fur comes from China, where over 2 million dogs and cats are slaughtered each year for their furs and skins," she said. "At least 10 dogs are slaughtered to make a single coat -- more if puppies are used." German pork could be destined for Chinese plates next year

In a separate signal of improving relations with China, German officials reached a veterinary agreement that is likely to open the Chinese market to German pork exports, the agriculture ministry said.

"I am optimistic that we will achieve the breakthrough next year, in the light of comments from the Chinese side," parliamentary agriculture secretary Gerd Müller told the German DPA news agency.

The deal provides for closer cooperation in safety and in tracing the origin of foodstuffs, as well as for an increased exchange of information on diseases like bird flu.

The agreement was the first bilateral agreement reached by the two countries since China called off a series of high-level meetings after Chancellor Angela Merkel met with the Dalai Lama in September.

Calling negotiations "very constructive and open," Müller, who was in Beijing to sign the agreement, said his meetings with Chinese agriculture officials were not hampered by the dispute over Merkel's meeting with the Tibetan religious leader.

China has given further indications of the strain in its relations with Germany. The Chinese finance ministry cancelled a scheduled meeting with German Finance Minister Peer Steinbrück in Beijing. (16.11.2007)

European lawmakers moved Tuesday to keep Fluffy and Fido out of clothing and stuffed kids' toys by prohibiting the trade in cat and dog fur after a voluntary ban was found to be ineffective. (19.06.2007)

What do you think of the EU's decision to ban trade in dog and cat fur? Send us your comments and please include your full name and country in your reply.