EU subsidy fraud in Slovakia: The dirty fight for arable land | Europe | News and current affairs from around the continent | DW | 26.06.2018

In eastern Slovakia, interest groups using mafia methods have discovered EU direct grants for agricultural areas as a source of income, trying to extort farmland from its owners. DW met one of the victims. 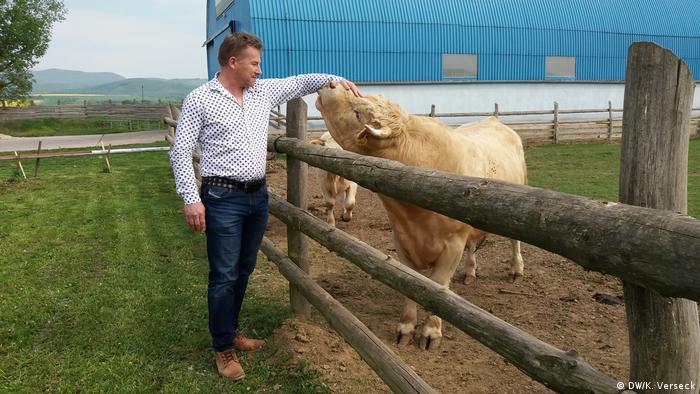 Frantisek Oravec (pictured) always wanted to be a farmer, just like his father and grandfather. The 47-year-old owns an impressive farm in Gynov, a small village in southeastern Slovakia. This farm is practically his lifetime achievement, built up over two and a half decades. Oravec cultivates almost 3,000 hectares (7,400 acres) of land, partially owned by himself, partially leased. During the last three years, however, he hardly found time to cultivate his land or take care of his livestock. Instead, he was studying documents, reading lawyers' correspondence, or appearing in courts of law. Or seeking treatment at a hospital.

Recounting the incident, Oravec holds up a photo that shows himself, face bleeding, nose broken, having been beaten up on his own arable land. "They are trying to steal my land," Oravec bursts out, both helplessly and resentfully. "I thought we were living under the rule of law and in the European Union?!"

Oravec belongs to a group of two dozen small and medium-sized farmers in eastern Slovakia who have become victims of a modern form of landgrabbing: using legal devices, networks made up of Slovak local politicians and businessmen are usurping control over arable land, in order to pocket EU direct grants for agricultural areas. 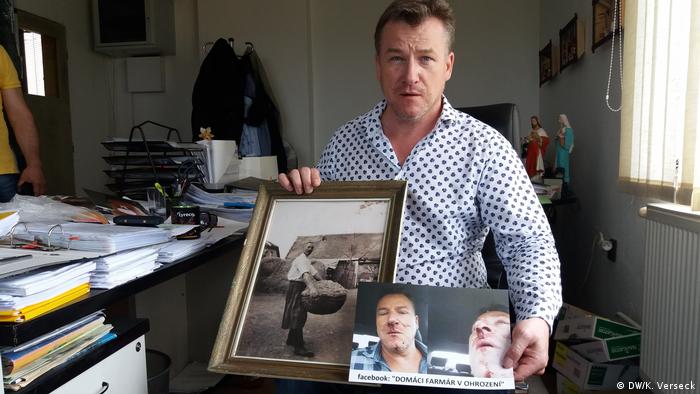 "I thought we were living under the rule of law?!" Oravec was beaten up on his own land

This business model is made possible, for one thing, by legal loopholes and wiggle room in Slovak subsidy grant regulations, and, for another thing, by existing power structures in a country in which good relations with the ruling elites are of the essence.

A long march through the institutions

Oravec's troubles started in 2015, when an agricultural company suddenly started to cultivate some 700 hectares (1,700 acres) of arable land owned by him, partially lying fallow. When he turned to the police, Oravec says, the company submitted faked lease agreements. The police then stated they were unable to do anything and that the case had to be settled in court. The company, says Oravec, had also submitted the allegedly forged lease agreements to Slovakia's Agricultural Paying Agency (APA), which is responsible for the allocation of EU direct grants to farmers. As a result, all payments were frozen. Courts have been dealing with the matter for three years.

In the meantime, Oravec managed to obtain a court decision which confirmed his legal entitlement to his property. His march through the institutions, however, continues to this day. What's more, in September 2016, Oravec was beaten up when he tried to film illegitimate cultivation of his land with a cellphone camera. In addition to a broken nose, he suffered injuries to his spine.

Afraid to speak out

The company challenging Oravec for his land is called ESIN Group. It is active in numerous business sectors, ranging from property development to power station construction, from production of special concrete to agriculture. An inquiry by DW mentioning the Oravec case remained unanswered. APA representatives ignored DW's request for a statement on the case as well.

Frantisek Oravec is one of some two dozen farmers in eastern Slovakia who've made similar experiences in recent years and spoken openly about them. The number of unreported cases could be much higher. Many of those affected claim to be familiar with cases of colleagues who don't go public out of fear.

For some time, there has only been scattered coverage of stories like Oravec's in Slovak local media, partially also in national media. Frequently, complicated litigation is at stake, and in addition, many Slovak newsrooms are afraid of being sued and, as a result, being ruined financially.

Investigative journalist Kuciak was getting close

Tragically, it was only after the murder of investigative journalist Jan Kuciak at the end of February that many cases of political corruption and organized crime were revealed nationwide. The same went for the "landgrabbing" scandals. In the meantime, even high-ranking Slovak officials like Prosecutor General Jaromir Ciznar admit that an "agricultural mafia" is active in eastern Slovakia, in which local politicians and businessmen, aided by corrupt civil servants, strip farmers of their land in order to collect EU direct grants for agricultural areas. 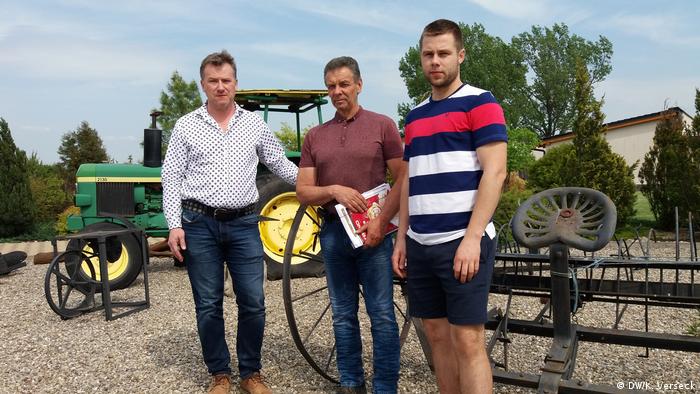 "It's rather like America, 300 years ago" - Oravec with two other victims of land extortion

Over the last couple of months, Slovak President Andrey Kiska called on government and authorities several times to solve the problems of farmers in eastern Slovakia. At the end of last week, he hosted a delegation of affected farmers after they had blocked Bratislava traffic with their tractors during a staged protest. Agriculture minister Gabriela Matecna, for her part, had refused to see the protesting farmers. An inquiry panel has now been tasked with investigating the matter, but the farmers still feel they're being strung along.

That includes Frantisek Oravec. Often he's under the impression that he has been left to fend for himself. The police didn't help him when he was beaten up, he says. And he continues to receive threats. He adds that every Slovakian is able to forge lease agreements without much difficulty, thereby triggering protracted court battles.

He's had to sell parts of his property in order to finance his legal battles. Oravec says he has lost faith in the Slovak state: "There is no rule of law here; it's rather like America, 300 years ago. Somebody comes along, puts a peg into the ground and says, 'This is mine now.'"

The Slovak parliament has approved a new government under Peter Pellegrini, whose predecessor quit after a journalist's murder sparked mass protests. Pellegrini has promised to keep Slovakia on a pro-EU path. (27.03.2018)