Estonian Foreign Minister Eva-Maria Liimets told DW that sanctions on Russia send a "strong signal" to the Kremlin that it must "fulfill its international obligations." This follows the imprisonment of Alexei Navalny.

Liimets and fellow EU foreign ministers met on Monday and gave the political green light for new targeted sanctions on individuals they hold responsible for the conviction and imprisonment of Kremlin critic Alexei Navalny and the clampdown on his supporters. 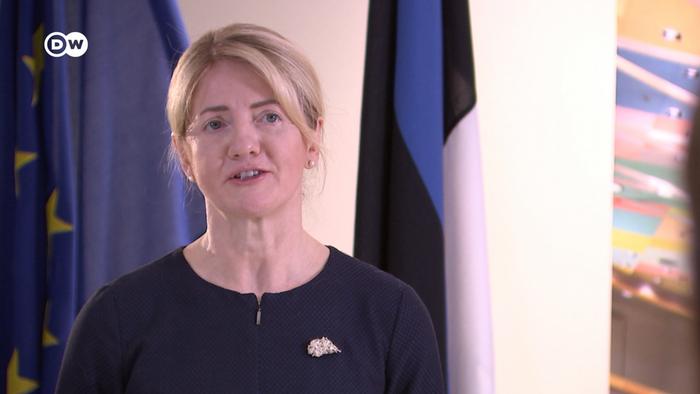 "I think that we came to a very important conclusion to give political guidance to our experts [on] how to proceed with the sanctions," Liimets told DW's Alexandra von Nahmen. "I think that it is a very strong signal."

The new asset freezes and travel bans will mark the first use of the Global Human Rights Sanction Regime, sometimes referred to as the EU's Magnitsky Act.

Liimets acknowledged that previous EU sanctions on Russian individuals and entities have been ineffective at changing government policy, noting that "it is really unfortunate that our signals towards Russia have not had the kind of impact that we would wish."

But she hopes the new measures will show Russia that it must "fulfill the international obligations that the country has voluntarily taken."

Liimets said it was "very important" for Estonia to have "good neighborly relations with Russia," but noted that this is impossible "when we see Russia's aggression towards its neighbors, towards the territorial integrity of neighboring countries, and also [its] nonfulfillment of international obligations, especially human rights and fundamental freedoms."

The minister said EU countries must have a "united approach" toward the Kremlin.

Liimets is part of Estonia's new gender-balanced government under Prime Minister Kaja Kallas. Liimets said the women-led administration showed the progress her country has made in the three decades since it regained independence from the former Soviet Union.

Senegal: Opposition calls for more protests after days of deadly clashes 3h ago