The European Union has added key security officials to its list of sanctioned individuals for the first time since 2013. The move comes as diplomats seek to renew the nuclear deal. 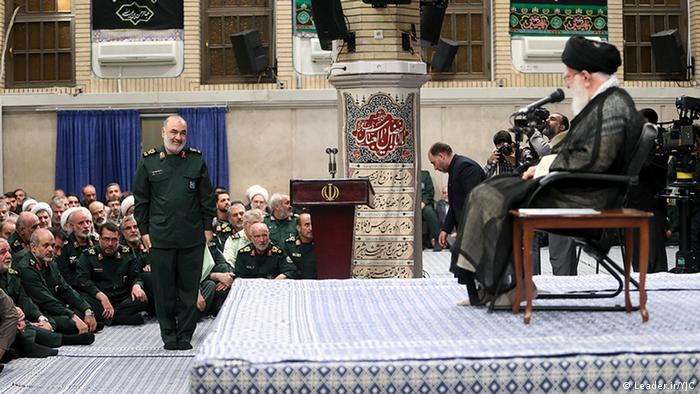 The EU commenced sanctions against eight Iranian security officials for their role in the 2019 crackdown against popular protest, the bloc's Official Journal confirmed on Monday.

The sanctions are the first since 2013. The move comes as members of the EU have been trying to reanimate the faltered Iran nuclear deal.

Punitive measures had been put on hold in the run-up to the 2015 deal signed by Tehran, the US and several other world leaders.

Iran's foreign ministry spokesperson Saeed Khatibzadeh said Tehran "strongly condemned" the sanctions and that the country was "suspending all human rights talks and cooperation resulting from these talks with the EU, especially in [the fields of] terrorism, drugs and refugees."

He added that Iran rejected "such actions from those falsely claiming to champion human rights" and that it was considering responding in kind.

Who has been sanctioned?

The head of Iran's powerful security force, the Revolutionary Guards, was added to the list along with militia commanders and police chiefs.

Travel bans and asset freezes are now in place against the eight individuals.

The EU accused the head of the Revolutionary Guards, Hossein Salami, of being responsible for the violent response to protests.

"Hossein Salami took part in the sessions that resulted in the orders to use lethal force to suppress the November 2019 protests. Hossein Salami therefore bears responsibility for serious human rights violations in Iran," the EU said.

The bloc also claimed they had been used to detain prisoners from the protests where they had been deliberately wounded with boiling water and denied medical treatment.

The Islamic Republic responded to two weeks of protest against a hike in fuel prices in November 2019 with a brutal crackdown. The UN has said that at least 304 people were killed. Reuters reported closer to 1,500, based on reports from Iranian interior ministry officials.

What is the status of the nuclear deal talks?

The EU described ongoing talks in Vienna as "constructive" on Friday. US President Joe Biden has said he wants to rejoin the deal that former President Donald Trump withdrew from.

However, both sides have made demands of the other, with Iran saying it will not start to roll back its uranium enrichment until the US lifts sanctions imposed by Trump.

A European diplomat told AFP that the new sanctions had been in the pipeline for a long time and that they had decided to impose them despite the ongoing talks.

The Iran nuclear deal, known as the Joint Comprehensive Plan of Action (JCPOA), was reached in July 2015 between Iran and the United States, Germany, Britain, China, Russia and France (known as the P5+1), as well as the European Union. The deal lifted international sanctions related to Iran's nuclear program in exchange for Tehran dismantling it.