The EU has announced plans to buy 1.8 billion doses of the BioNTech-Pfizer vaccine through 2023. The bloc is also bringing forward shorter-term Pfizer deliveries after suspending orders for the Johnson & Johnson jab. 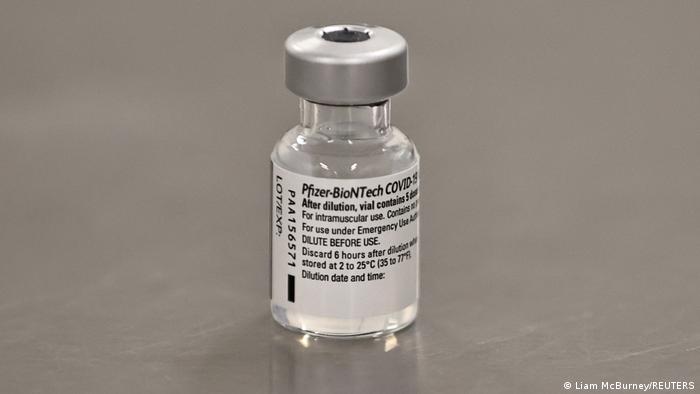 Von der Leyen said the bloc was placing its confidence in the jab, which has been the mainstay of the EU's relatively slow vaccination campaign until now.

The Commission chief also said the bloc was bringing forward an order for delivery of 50 million doses of the vaccine to the second quarter of this year, after makers of the  Johnson & Johnson vaccine suspended their deliveries.

Von der Leyen said Brussels had full confidence in the technology behind the Pfizer vaccine. The manufacturing process used for the Pfizer product — dependent on mRNA — is different then the one behind the Oxford-AstraZeneca jab, which uses a cold virus to transport a segment of the coronavirus to the recipients' cells.

"We need to focus on the technologies that have proven their worth," von der Leyen said.

The EU currently has a portfolio of 2.3 billion doses from several companies, and the bloc is still negotiating more contracts — including with Pfizer.

The bloc has had a slow first-quarter rollout, mainly because of constraints in vaccine supply constraints. Top EU officials have been particularly critical of pharmaceutical giant AstraZeneca, which has delivered less than a quarter of the 120 million doses it had promised.

Although the European Medicines Agency has found AstraZeneca's vaccine safe for all adults, many EU countries have taken the precaution of limiting its use only to older people. Those decisions came after a number of reported cases of a very rare type of blood clot in younger people who had received the vaccine.

Von der Leyen said the bloc needed to act quickly after its planned rollout of the Johnson & Johnson vaccine was put on hold. The company has suspended its European deliveries while an investigation is carried out — also into rare blood clot cases possibly linked to the vaccine — in the United States.

"As we can see, with the announcement by Johnson & Johnson yesterday, there are still many factors that can disrupt the planned delivery schedules of vaccines," von der Leyen said.

"It is therefore important to act swiftly, anticipate and adjust whenever it is possible," von der Leyen said. She added that the bloc was bringing forward to the second quarter the delivery of 50 million BioNTech-Pfizer doses that were originally scheduled for the fourth quarter of this year.

The order brings the total doses for April, May and June to 250 million — more than half of all jabs to be given across the EU in this quarter.

"I think this will substantially help consolidate the rollout of our vaccination campaigns," she said, noting that there have already been 100 million doses given in the bloc to date. About 27 million people across the bloc are fully vaccinated.

The EU has still not announced what it plans to do about any further contracts with AstraZeneca. In addition to shortfalls earlier in the year, the firm has announced that it expects to send far fewer vaccines than stipulated in the second quarter in its contract with the European Union.