Vaccine developer BioNTech has launched production of the COVID-19 vaccine it developed with US giant Pfizer at a new plant in the German town of Marburg. The facility could significantly boost the EU's vaccine supply. 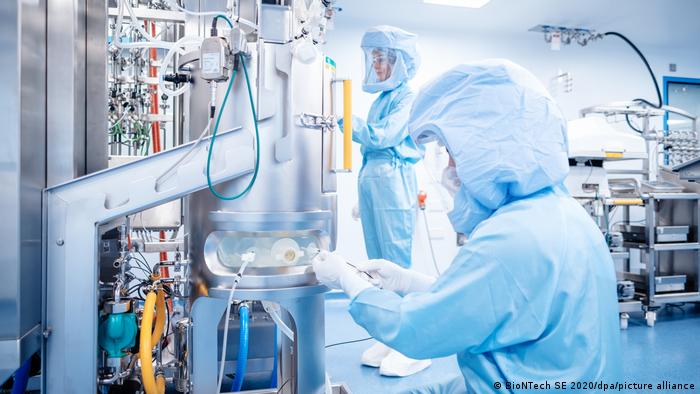 On Wednesday, the German vaccine maker BioNTech on Wednesday announced that it had started production at its new facility in the town of Marburg, a development that it is hoped might significantly boost the European Union's vaccine supply.

The company reported that it had already begun making the active ingredient of the BioNTech-Pfizer jab.

"We started the manufacturing process at the Marburg facility with the execution of the first step: the production of mRNA, which is the active pharmaceutical ingredient," BioNTech announced in a statement.

After purification, according to the company, lipids are to be added to form lipid nanoparticles — the delivery vehicle for the drug. The purified and concentrated product will then be  transported to a "production partner" site for completion under sterile conditions, BioNTech reported.

The main EU plant for production of the vaccine is Pfizer's factory in Puurs, Belgium.

BioNTech plans to produce up to 250 million doses of the COVID-19 vaccine in Marburg in the first half of 2021.

The European Medicines Agency (EMA) is expected to carry out its first quality checks on the medical products from the site in February or March.

"The first vaccines produced at the Marburg site are expected to be delivered at the beginning of April," BioNTech said.

BioNTech announced in mid-January that shipments of the jabs for the EU would be delayed because of necessary modifications at the Puurs factory.

The news took the bloc — now under fire over its sluggish vaccine rollout— by surprise. The company said in early February it would meet its contractual commitments for the first quarter and pledged to send up to 75 million extra doses to the EU in the spring.

Brussels has ordered a total of 600 million doses of the so-called Comirnaty vaccine from BioNTech and Pfizer.

BioNTech said it expected the site in Marburg, some 75 kilometers (almost 50 miles) north of Frankfurt, to become "one of the largest mRNA manufacturing sites in Europe." The expected annual production capacity, it said, would be 750 million doses.

To ramp up the scope for vaccine production, BioNTech bought the Marburg plant from Swiss drugs giant Novartis last year. It retained some 300 employees already working there.