EU lawmakers have voted in favor of a resolution that would force Internet companies to separate search engines from commercial services. Though not named, Internet search giant Google, was the target of the vote. 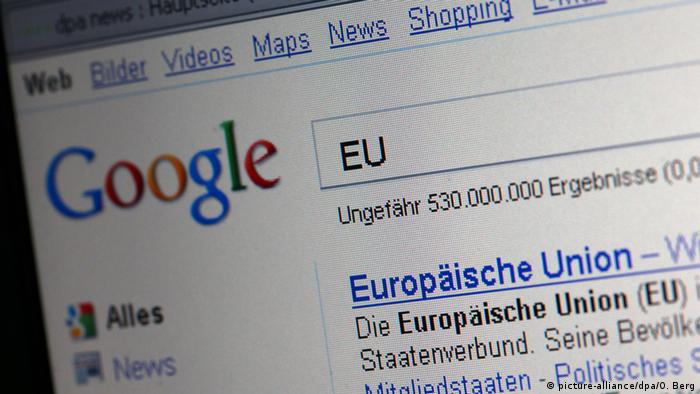 Members of the European parliament voted overwhelmingly on a measure aimed at keeping companies, such as Google, from dominating the search engine market.

The motion "calls on the [European] Commission to consider proposals with the aim of unbundling search engines from other commercial services as one potential long-term solution" to ensure fair competition.

While the vote was largely symbolic, its outcome could put EU anti-trust commissioner Margrethe Vestager under pressure to pursue complaints against Google, which critics say squeezes out its competitors using unfair advantages.

Ahead of the vote, the US mission in Brussels said it had "noted with concern" the resolution.

However, during a parliamentary debate on Wednesday, EU lawmaker Ramon Tremosa of Spain noted that the fight was not anti-Google.

"We are not against Google, or any other US company. We are against monopolies," Tremosa said, adding that the EU wanted a "level playing field in the European digital market."

The US-based Internet giant has been mired in an anti-trust inquiry with the EU for the past four years. While Thursday's resolution did not specifically name Google, it was widely seen as yet another blow to the company's domination over the Internet, especially in Europe where it the most widely used search engine.

'Right to be forgotten'

Privacy regulators in Europe want Google and other search engines to wipe results from all search engines - not just their European versions - when people request their "right to be forgotten."

The EU's top court has already ruled in favor of the "right to be forgotten," which allows users to request results including information about them to be deleted. Google had only been erasing information from European-based search engines, such as Germany's google.de, but still allowing it to appear on google.com.

The guidelines for implementing the "right to be forgotten" ruling were issued by EU data protection authorities on Wednesday.

A Google spokesman said the company had not seen the guidelines but would "study them carefully" when they were released.

Google receives thousands of European requests to 'be forgotten'

Internet giant Google has received more than 12,000 requests from people in Europe wanting past information from their lives to be "forgotten" in online searches. The case pits privacy against freedom of information. (31.05.2014)