Google receives thousands of European requests to 'be forgotten'

Internet giant Google has received more than 12,000 requests from people in Europe wanting past information from their lives to be "forgotten" in online searches. The case pits privacy against freedom of information. 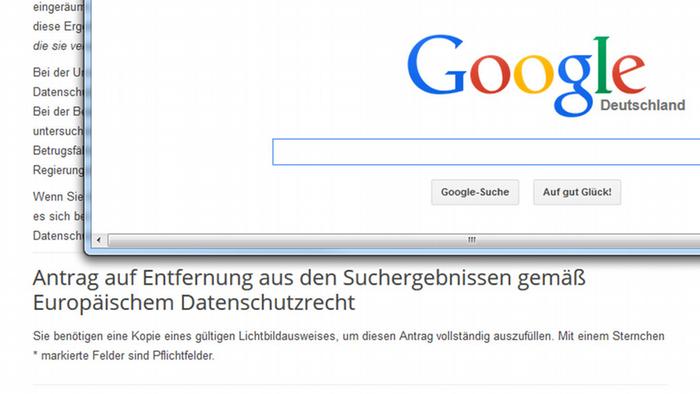 Google opened up an online form late this week that allowed people to ask for certain information to be removed from the search engine's results. Within the first 24 hours, Google confirmed that more than 12,000 requests were submitted, sometimes at a rate of more than 20 entries per minute.

Google was responding to a European Court of Justice (ECJ) ruling from May 13, which found that citizens should be able to request this of the company. The ruling applies to the 28 EU member countries, although Google agreed to broaden the catchment area to include Switzerland, Iceland, Liechtenstein and Norway.

"The court's ruling requires Google to make difficult judgments about an individual's right to be forgotten and the public's right to know," a Google spokesman said.

The case of a Spanish man who objected to the fact that searches of his name revealed links to an old newspaper article about the repossession of his home prompted the ECJ to issue the advisory ruling. Data protection representatives from the EU's 28 members are due to discuss the ruling's implications in a two-day meeting next week.

Any data "forgotten" by Google, which mostly provides links to material published by others, is not deleted or removed from the Internet - only from Google search results.

Advocates hailed the decision as an advancement of personal privacy in the Internet age, while critics have either said it amounts to censorship, or that it could serve to help the rich, powerful or criminal to conceal information.

The former head of motorsport's global governing body, also a key Formula One figure for more than a decade, survived an FIA members' vote of confidence in 2008 related to the scandal, first reported in Britain's now-defunct Sunday paper the News of the World. However, in 2009, Mosley agreed not to run for a fifth term as FIA president.