Most of the speakers in the European parliament's Ukraine debate called for solidarity with the pro-European demonstrators. They're hoping for a peaceful solution - and had severe criticism for Russia. 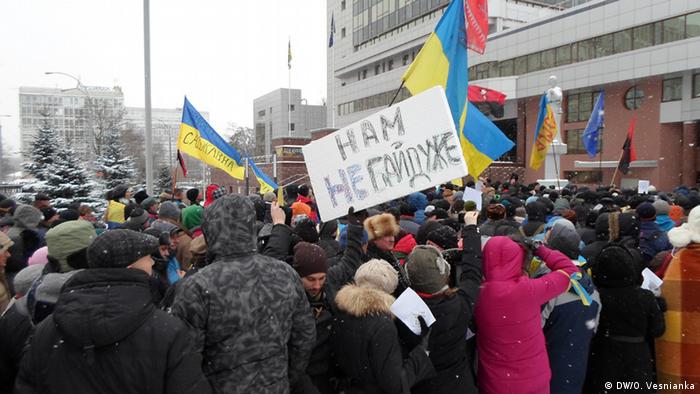 Most of the speakers in the European parliament's Ukraine debate called for solidarity with the pro-European demonstrators. After the debate was over, Ukrainian security forces began removing the protesters from the Maidan, Kyiv's central square, but the parliamentarians were still hoping for a peaceful solution - and they had severe criticism of Russia.

Rebecca Harms, the Green party faction leader in the European Parliament, has been travelling to Ukraine for many years. She supported the Orange Revolution in 2004 and maintains contact with the imprisoned opposition leader Yulia Tymoshenko. She was evidently deeply moved as she spoke in the parliament, with the blue and yellow Ukrainian flag draped over her shoulders, and she called on the European Union to stand with the demonstrators on the Maidan in Kyiv.

"I'm not usually one for flags and symbols, but in this case it was necessary," she explained. In the conflict between President Viktor Yanukovych, who has allied himself with Russian President Vladimir Putin, and the pro-European forces, Europe must not lack commitment, she said.

"We cannot afford to be indecisive about those who are standing on the Maidan," said Harms. "That would be have been as if, at the time of the Monday demonstrations in East Germany, we had clarified our interests with Moscow before taking sides." 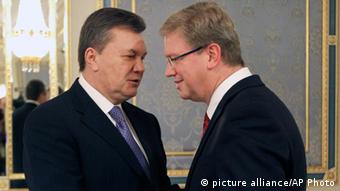 EU commissionerStefan Füle, who is responsible for the EU's eastern partnerships, would not take a clear side in the debate, but referred to the mediation attempts currently being undertaken in Kyiv by his colleague, foreign policy chief Catherine Ashton. "We are in constant contact with both the government and the opposition and civil society to find a way out of the political stalemate," he said. "That must happen without violence, and through a convincing compromise, towards a quick stabilization of the country."

Füle said he regretted that Yanukovych was no longer working towards an Association Agreement with the EU, but he insisted that the Ukrainian people were pro-European. "I admire the Ukrainian nation for their love of freedom and their European spirit," he said. "They're not looking for money from the EU, they want the chance to live by European values."

During the debate, some parliamentarians accused the Commission of underestimating Russian pressure on Ukraine. Harms said the EU shouldn't let itself be intimidated by Russia. The latent threat of causing difficulties with gas supplies could prove a boomerang for Russia. "When it comes down to it, the European member states have very good trump cards in their hands," she said. "It's not only that we are dependent on gas from Russia. Russia is very much dependent on the payments and the foreign currency that flows into the country because we buy the gas."

Elmar Brok, chairman of the European Parliament's foreign policy committee, is also calling for round table talks between the Ukrainian government and opposition. "I have to say, 'Government, listen to your people, do a round table and try to find a settlement!'" he said. "The million people on the Maidan for me mean more than the talk between Putin and Yanukovych in Sochi."

Together with other parliamentarians, Brok took part in the demonstrations on the Maidan. After a meeting between Yanukovych and his predecessors, reports emerged from Kyiv that imprisoned demonstrators were to be released, a precondition that the opposition had set for participating in the round table talks.

Guy Verhofstadt, head of the liberal faction in the European Parliament, accused the Russian government of blackmailing the Ukrainian people, while Daniel Cohn-Bendit of the Green party called for a political boycott of the Winter Olympics in Sochi, citing the example set by German President Joachim Gauck. "I would wish for a European Commission and a European Council that said in union, 'We're not doing that either,'" he said. 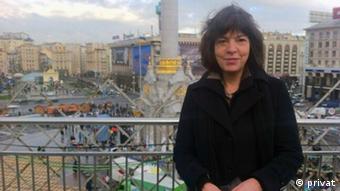 Not going to Russia

Viviane Reding, vice president of the EU Commission,has already made a similar plea, telling DW that she would not be going to the opening ceremony of the Winter Games in Sochi either - because of the suppression of gay people's rights. "I certainly will not be going to Sochi, because as long as minorities in Russia are discriminated against in this way, both legally and socially, it sends the wrong signal," she said, adding that she hopes that other leading EU politicians would take the same attitude.

Füle, on the other hand, said that maintaining dialogue with Russia was more important. For one thing, he said it should be made clear to Moscow that an Association Agreement between Ukraine and the EU would not bring any economic disadvantages for Russia.

Yanukovych announced in Kyiv that he may send a delegation to Brussels as early as Wednesday (11.12.2013) to hold talks. At the same time, he also emphasized that a close economic relationship with Russia needed to be maintained.

But the European Parliament did not formulate any concrete resolutions - the messages of solidarity were mainly directed at the TV cameras, and few parliamentarians were actually present. Next Monday (16.12.2013), after the return of Ashton from Kyiv, the EU's foreign ministers will address the issue of Ukraine - but EU diplomats have already briefed that sanctions designed to bring Yanukovych round would not be up for debate.

Berlin and Moscow at odds over Ukraine?

Ukraine may become a bone of contention between Berlin and Moscow. Russia criticized a visit to Kyiv by German Foreign Minister Westerwelle, and now Chancellor Merkel plans to support opposition leader Vitali Klitschko. (09.12.2013)